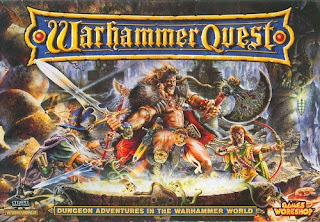 It's possible that this review is motivated by more than a simple desire to educate and entertain. In fact, it's completely likely that a third purpose of this review is to brag loudly that I own a copy of Warhammer Quest in absolutely fantastic shape. Heck, I had to take the plastic off the cards and cut the figures off the sprues before I could play. I mean this puppy is cherry. While I'm bragging, I have a very large penis (that may or may not be true, or even relevant. I just felt like adding in an extra brag).

Way back in the olden days (you know, 1995), Games Workshop used to make some really cool board games that riffed off their Warhammer minis games. Over time, the miniatures got all popular with unattractive guys who spend too much time in the back room at the game store and not enough time with girls. The board games, on the other hand, did not make quite as much money (probably because they did not require a new codex every two years that made everyone go out and spend another mortgage payment on plastic soldiers). So despite having some really hot properties on their hands, Games Workshop stopped printing them. More than a decade later, those games are pound-for-pound more valuable than a bar of gold (that is almost certainly not true, but since I don't know how much you can get for a gold bar, I could actually be right).

There are a few reasons why Warhammer Quest fetches such a high price on eBay these days. For one thing, it's sort of rare. Not ridiculously so - they're not like original copies of the Gettysburg address, or a signed DiMaggio rookie card - but they're not easy to find at anything like a reasonable price. If you do find a copy, it's probably in a beat-up box and missing half the pieces, so finding a copy that was just this side of brand new was not just lucky, it was AWESOME. Almost as awesome as my great job playing online video games and reading webcomics for six figures a year (I might have that job - but a reasonable person would ask himself why, if I make that much money, do I have to write a review site for free games).

The enormous number of awesome pieces is another reason Warhammer Quest costs more than a new television (if the television is very small). The figures in this box are absolutely, without contest, the best you'll find in a dungeon game. It goes without saying that they're better than anything else made at the time, but they're actually nicer even than what you'll find in Descent. And that's saying something, because those Descent minis are pretty damned cool.

It's not just the miniatures, either (though there are nearly 100 minis in the box). The dungeon tiles are fully illustrated and completely gorgeous. The tiles connect to each other using plastic clips in the form of fully sculpted doors. There are bunches of cards, and optional tiles, and little cardboard counters. By way of bragging further, I punched most of the counters on the set that I got a couple weeks ago. Also, I drive a Maserati (this is definitely not true, but it would make a pretty cool brag).

The game itself is hailed by many as the greatest dungeon game ever. The rules are fairly easy to learn and follow (unlike the current reigning dungeon game champion, which has to have online FAQs and fan-created indexes just so you can remember what happens when you get spider web on you). One enormously awesome feature is that you don't need a dungeon master - all four players can join in on the same side, so you don't wind up with one guy who has to be the bad guy all the time because he's the poor bastard who had to read all the rules.

As players explore, dungeon cards tell them which room to place next. There are junctions and dungeon rooms and corridors and horribly dangerous objective rooms where everyone pitches in to try to overcome huge bad-ass villains who could totally eat your head (and frequently do). You draw event cards when you explore a new room, and most of these event cards tell you all about the hordes of monsters that swarm into action and carve on your heroes like overzealous prison tattoo artists. In case you're wondering, I have prison tattoos so cool they'll make your great-great-grandparents cry in their graves (no, that's not true either, but it would be pretty cool, right?).

Now, a lot of dungeon games provide a good amount of replay value. HeroQuest can be played like 20 times before you even need to start making your own adventures, and Descent has the Road to Legend expansion that would require a team of four guys about two solid weeks of Mountain Dew and caffeine pills to finish a whole game. But Warhammer Quest - now THIS is a replayable game.

For one thing, you don't need to run out and buy big fat expansions (though there are a few of those out there). You can play out the part of the game where the heroes return to the town - or not, if you don't feel like it. You can add new monsters simply by buying a few miniatures and adding them to the mix - or not, if you're not in the mood. You can gain skills, and keep cool treasures, and get tougher so you can fight meaner dudes. You can start with the main game and play for years without ever worrying about buying more stuff. But let's face it, if you spent $250 to get this game off some eBay scalper, you can probably afford to pick up a few skeletons or beastmen.

There's even rules for turning your Warhammer Quest game into a full-on RPG, complete with a game master, and then you really never need to leave your mom's basement (except maybe to go to rennaissance festivals). You can run your heroes through dark, dank dungeons, while one guy tells you all about the scary kobold wearing a headdress made of human ears, and then says, 'Gimme a roll!'

Yes, I am exceptionally proud of my copy of Warhammer Quest. It's ridiculously fun, with years of playing goodness and a huge online library of fan-created support material. The components are absolutely top-notch. And as an added bonus, I'm dating Heidi Klum AND Tyra Banks.

Figure out for yourself if that last brag was true.

Pros:
Enormous piles of great miniatures, beautiful dungeon tiles, and lot of other cool stuff
Simple to learn and challenging to win
Fully cooperative
You can even play it solo!


Cons:
Can be a little arbitrarily 'holy crap that's hard!' if the dice hate you
Sweet Jeebus it's expensive

If you think I can link you to some retailer selling Warhammer Quest, you're delusional. Look for it on eBay, or be like me and just be this damned lucky.
Posted by Matt Drake at 8:32 PM

Ah, well, maybe you would donate your copy? Seeing as you get all those other games for free all the time and such? You know, because you care about me?

That was a tough review to follow - so I take it you don't like this one and it will be in the list of games your giving away in a contest soon? Very cool I hope I can win this one as it sounds so cool.

On a side note: I mean if your bringing your girlfriends to GenCon this year we should probably go out and party for the night!

This is one of our favorite games to play, though we haven't in a long time because it does take all night (at the very least)

Sometimes we'll have enough people that we'll run 2 parties in competition with each other.

We've downloaded cards and tiles from players that have lovingly crafted new stuff for the game. We printed out the cards on good cardstock, laminated them, and used a diepunch on them to make them have rounded corners.

We've painted miniatures so that we have enough Skaven for those encounters when the dice betray us, and they almost always do...

So much easier to teach than D&D.

So, you gonna tell us HOW you got it? I'm pretty sure it invlves souls, dark gods and rituals. Right?

Congratulations on the getting that great game, those awesome girlfriends, that cool car, and your penis.

You lucky bastard....someone needs to reprint this damned game...

And you had a typo I wanted to point out...you spelled the word TINY with LARGE at the end of the first paragraph.

Yea one of GWS best. They claim they cannot reprint it 'cos the original files for the Dungeon Tiles are lost on their servers. Pity!

Hey good for you its a cracking game, just want to put in my own brag, I also own it and have it in excellent condition since it was first released. Oh I almost forgot if you think the minis are astounding you should look for the expansion 'Lair of the Ork Lord' seriously google it and if you find it get it really worth it. I also have the chaos warrior and Elf ranger :)

Hmmm. I got this game and one expansion when I was like 13 and played it maybe once (too hard for me then). So I got one almost virgin version of this game and it seems that it is in quite good value. Interesting :)

I enjoyed your review, it made me chuckle more than a few times :-)

I would like to add my brag: I have two copies of the game, my friend got me the second after some bad weather and over-use combined to my first set of board sections that 'slightly foxed' look.

2 sets! I'm beginning to appreciate how lucky I am.

The best bits of Quest are you don't need to use a GM if you don't want to, there are loads of resources on the web for it (even now!), and the random element makes you want to laugh and cry by turns at times!

Acouple of games ago, we rolled about 7 Unexpected Events in a row, all Monsters. We ran out of Minotaurs and Ogres...

I have a brand new Warhammer Quest. I purchased it in NYC in 1998 in a small gaming shop in Rockefeller Center. All the miniatures are unpainted and still attached to their plastic frames. Manual and catalog are brand-new. All parts are intact. Game has been totally unplayed. I only opened the plastic seal just to check if all the parts are still ok as they have been sitting in my attic since 1998. I can send you pictures if you want to see.

I still kick my self in the ass over selling this gem of game about 12 years ago. Looking forward to the iOS version that is being developed. Descent (ver 2) will have to do.