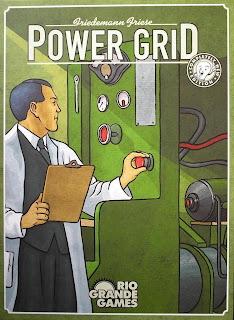 My primary goal as a writer is to entertain. Specifically, I like to make people laugh. I'm no Maddox (for one thing, I stick to naughty words you could hear on Saturday Night Live), and I will never be Dave Barry, but I give it my best shot. Unfortunately, tonight's review is for Power Grid, and I'm horribly afraid that there is absolutely nothing funny about this game.

Let's start with the theme. In Power Grid, you're all power moguls building power plants and trying to supply cities with juice. This is completely not funny. I mean, what kind of joke do you make about something this horridly mundane? Do I just fall back on Seinfeld and say, 'who is the marketing genius behind this game!'? No, I don't, because even that lame bit is not the least bit amusing when applied to a game where you dive head-first into the big business of selling electricity. Hell, you don't even get to electrocute anyone. I could at least exploit that for some dark humor, but no, nobody gets so much as a static shock when they grab the car door.

So how about the game play? Can I mock the game play? Sadly, no. The game is incredibly well-designed, and I personally found the rules and game play to be nearly flawless. It's so balanced, with virtually no luck, that there is no opportunity to compare it to anything even remotely amusing. I can't even pull out a tired chimps-flinging-poop joke, which is sad, because chimps flinging poop are almost always funny (unless they are flinging poop at you, in which case I find it terrifically hilarious, but you probably are not as amused. Especially if they're accurate).

Every turn, you'll get a chance to bid on power plants. The person who is winning the game has to bid first, which actually gives a huge advantage to the person who bids last. This fantastic balancing mechanic carries through the whole game - at any given time, the person who is sucking the most has the best chance to get ahead. It really controls the runaway leader factor, which is excellent game design (but not very funny).

Power plants can be fueled by resources, which you will have to buy to keep your cities lit up. Some of these are very cheap at the beginning of the game (like coal), and some are a bit pricey (like uranium). If you can get a wind farm, these are great, because they require no resources, but they can be really expensive. A nuclear plant is expensive at the beginning of the game, but will be a great investment when you're buying cheap uranium and everyone else is fighting cage matches to get the last few bits of coal.

Once you have resources, you build connections to new cities. All the cities are in Germany, so there's some humor value there, I suppose. Frankfurt is a funny name for a city, as is Dusseldorf. In fact, I like the way you can combine both of those to make some fairly juvenile double entendre - 'I would like to Frankfurt your Dusseldorf' - but all things considered, that's not that funny. In fact, you can flip the board over, and then all the cities are in the United States. Good luck using Chicago and Miami to make a good sex joke - 'I have a huge Chicago, and would like to put in your Miami'. See? That's not funny. That's stupid.

Making connections between cities can be really expensive, especially if they're a long ways apart. You have to lay a lot of pipe between distant cities (now we might have something we could work with - 'I'm going to lay pipe from my Frankfurt to your Dusseldorf' sounds pretty dirty), and you have to pay a lot of money to connect those cities. There's a lot of strategy in picking your connections, too, because early on, you get to monopolize any city you grab, and can pretty easily block your opponents from getting any good land.

As the game progress, your coal and oil plants will start to get pretty costly, and you may even wind up with no resources to power them. At this point, if you've thought ahead, you'll have some nuclear plants and wind farms, which are actually cheaper to power by the end of the game, when the coal and oil are running short. These will also power more cities, so that you can expand more and earn more money (and win, which is another nice benefit).

Now, in all this, there is one funny thing - garbage. See, some power plants run on garbage, and what's even more fun is that the garbage is more expensive than coal or oil. I have to wonder what kind of natural resources Germany produces that its garbage is more expensive than oil. Apparently German garbage is much nicer than the spoiled vegetables and beer-soaked paper towels that I throw away. Apparently German garbage is full of processed plutonium. That might be why German people have so much trouble being funny - they are morose because their garbage is making their hair fall out.

But the garbage is just one brief moment of humor, and the game itself is completely devoid of mockable hijinks. It's easy to pick up the rules, but it's a real bastard to try to keep track of all the details. It's like a college-level economics lesson. If you like micro-managing resources and carefully planning for future shortages, you'll probably love Power Grid - but you're not likely to laugh. If you prefer games with pratfalls and unlucky dice rolls, Power Grid is going to make you sleepier than a Xanax and a bottle of Wild Turkey.

I guess the only really funny thing about Power Grid is that it gives me a fantastic opportunity to mock German games in general. I have joked before that Americans and the French make games with body counts, and German games have such exciting themes as farming and delivering mail. Power Grid further shows us that German people must be very boring people. That's probably why they like David Hasselhoff so much - that guy only quits smiling when he's laying drunk on the floor and eating fried chicken while he cusses at his offpsring. Quick quiz - what do Benny Hill, George Carlin and George Burns have in common? I mean, besides being funny (and dead). The answer? Not German.

So in the end, Power Grid is a really good game, if you like games that play like a twelfth-grade economics exercise. But it is unfortunately not really very funny.

Cons:
Very much an economics game, which may turn off many players
Not funny

If you've got smart gamer friends, they're going to love Power Grid. And I personally think you should get it from Dogstar Games, because A) it's cheap, B) you can get free shipping, and C) they support this site, which keeps me from begging for scraps from my readers. So go here and get yourself a really good (but totally not funny) game:
http://www.dogstargames.com/product/RIO240
Posted by Matt Drake at 9:05 PM

Funny and informative post. And thanks for the DogstarGames tip. They were cheaper and more responsive and cooler than any online game store I have found. Here's to a long, mutually profitable future to both of your sites!
-Mook

Thanks for reviewing this one - I have it but have yet to play - the rules are a lot to swallow for a 2 hour game knowing my crew will not be digging this one much, but man I want to play it even more now!

David Hasselhoff is such a loser - he was here at the big sports fishing lodge, all comped for free, didn't tip at all, was drunk the whole time, and one of the captains has pictures of him all drunk swimming - and he is a terrible swimming ( true story ). SO there if you need more fuel for the fire in the future.

OK what other games do we need reviews of?

Growing Hunger? the expansion for it? That one looks way way cool?

Have you done Pandemic yet? I would love to see your take on that, being a co-op ?


Kayak Chaos - as a kids game and a Beer & Pretzel game

Oh yea, what is the new one from Flying Frog- about the witch hunt, that would be one to review also.