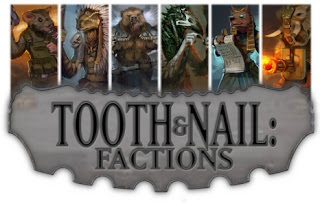 It seems odd to me to title a game with a colon in it. Expansions do it all the time, but when Small Box Games calls their game Tooth & Nail: Factions, it sounds like there's another Tooth & Nail out there, maybe Tooth & Nail: Clippings or Tooth & Nail: and Hair. But nope, this is the base game. Of course, it's no stranger than Vampire: The Masquerade (which begs a similar question - is there a Vampire: The Night Out At The Movies or Vampire: The Going To Bed Early?), and that's been around for decades.

Off-beat naming conventions aside, Tooth & Nail is a fascinatingly interesting little game. It comes in a really small box, which makes sense because it's from a company called Small Box Games, thus displaying a remarkable amount of truth in advertising. And not only is the box really small, but the cards inside only fill it about halfway, which means you've got a pretty darn small game. It doesn't seem like there should be much game play with the 200 cards you get, but small packages and all that.

Tooth & Nail features a bunch of cards with animal warriors, like an elephant with a chain gun and a wallaby with a diaper rash. And in an exceptionally complicated twist, they fight. Damage is done as discarded cards, and whoever runs out of cards first loses.

If that doesn't sound like a lot of theme, don't worry about it. This game doesn't have a lot of theme, but it doesn't need a lot of theme. Because what it has is the kind of combo-slinging genius you don't often see outside of collectible games, and it has it in spades.

For instance, one vulture card with wires in its head can steal cards from the other guy's deck and add them to yours. One hyena with an uzi can kill wizards (which is interesting, because you would think an uzi would be equally efficient against people who were not wizards). There are Egyptian jackals who yank cards right off the top of the other guy's deck and directly out of the game. There are all manner of awesome abilities, and they work great together.

Another interesting thing about Tooth & Nail is the timing. As in, this came out at almost the same time as Smash-Up, and if you really want to see the game work at it's best, the only good way to play it is by combining decks. Only instead of shuffling together your ninjas with your pirates, you get to throw your African animals in with your Arctic animals to see what happens when they meet up in Munich for a beer and some schnitzel.

This combined-deck mode is called Alliance, and seriously, it's the only way to play. You can learn on the base game, but as soon as you possibly can, you need to mix up the decks. There's a lot of strategy in how you combine your decks, because it will change how you play. You can only use the special ability of one faction, so you have to decide how you're going to use your combined deck to beat the yak hair out of the other guy's water buffalo. One ability might give you insane attack strength but leave your command vulnerable, while the other might give you all kinds of control over your deck or the ability to heal the damage you suffer.

And then when you play, you're going to see combinations so involved that they will literally make your head spin. I'm not being metaphorical or allegorical or prehistorical. Your head will actually spin. Of course, it can only spin like 90 degrees, or you would snap your neck and die, and it's probably only spinning that far if your dog is puking on the love seat and you have to jump up really quick to get her outside before you spend the next two hours shampooing orange barf stains out of the upholstery.

But the combinations really are amazing. In one game we played (and we have played seven so far), the last turn was incredibly crucial. If my wife could do 15 damage - an incredible amount - she would win. Otherwise, her two remaining cards were toast. So she attacked, used a jackal to put the attackers into her deck, used a different jackal to get more cards, used a rat to draw some other cards, used another rat to get two more actions, used her new actions to put more warriors into the fight, and then used her last action to attack one more time. To describe how convoluted and tricky this was would be impossible if you had not played Tooth & Nail, and if you had, you would already be nodding and saying, 'yep, you can totally do that.' And after all the convoluted combo play, she actually managed to destroy a third of my deck in one turn and win the game in a wild upset.

Moments like that, where you see an incredible series of brilliant plays come together to pull off amazing feats, are what gaming is all about (unless it's all about driving cars with guns on the roof, or barbarians smashing goblins with giant swords, or growing a crop and then taking a nap, which only happens in German games). After that last game, with that stunning combination, I was hooked. I don't care if there really is no reason at all for there to be an anthropomorphic walrus. This game could be played with no theme at all, and be absolutely brilliant.

In fact, I don't think I would have minded an absence of theme, if the art was pretty. In an act of arguable irony, the art was done by John Ariosa, who has done several games where his work was fantastic, like Summoner Wars and Mice & Mystics. And yet in Tooth & Nail, he must have been on a really tight deadline, because there were several cards where I said to my wife, 'I think this bird has cerebral palsy.' Lots of the art is thoroughly bitchin', but I ran across a whole bunch of them that were sloppy and awkward. Since Small Box Games is starting to make a real effort to publish gorgeous games, the occasionally unappealing card stood out more than it would have if the game had come from, say, Z-Man, who often specializes in butt-ugly games.

But art aside (and I'm nitpicking like crazy, because most of the art is pretty awesome), Tooth & Nail is one hell of a fun game. It combines all the things I love in a game - strategy, clever plays, planning, sacrifices, decision-making and violence. You can play the base game in fifteen minutes, and the Alliance version in half an hour, and both are pretty damned awesome. I know I recommend a lot of Small Box games, but if you're only going to get one, make it this one. If you like the kind of card play you expect out of Magic, but don't want to spend a paycheck on cards and then throw a third of them away because nobody needs that many land cards, you really ought to check this out. And then you should start an email campaign to John Clowdus and tell him he needs an expansion right now. Tell him to ignore his day job, his family and his personal hygiene and get us more factions, because Tooth & Nail is one you're going to want to play until the cards fall apart in your hands.

2 players (or more with optional rules)

Pros:
Surprisingly robust
Lots of strategy, starting before you play your first card and ending when one of you is dead
Incredible combinations
A neat but unnecessary theme

Cons:
A few poorly illustrated cards
I want more of this, right away

Being as Small Box Games is a very small company (thus the name), you can only get Tooth & Nail directly from them. And you should, because it's awesome.
http://www.smallboxgames.com/shop.html
Posted by Matt Drake at 7:49 PM

Sounds like a very cool game, one that I wouldn't have heard of if not for your review, and now it's subsequently going on 'the list'.

Wow now i NEED to play this game. I ordered it a week ago and it's still "en route" definitely disadvantage of living in canada!

Great review, can't wait to get it to the table!

Did you get a chance to try it with 3 or 4 players? I haven't seen/heard anyone review that aspect and i am curious how it scales!