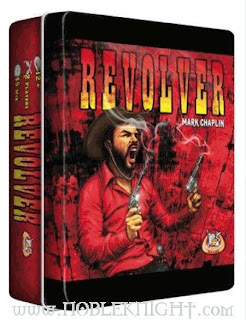 I think timewaster games are a sad commentary on society. When you can put a game on your phone whose sole purpose is to distract you from the fact that you are doing absolutely nothing whatsoever, and then play it while you wait at the DMV instead of reading a book or something - well, that obviously means something bad. What that might be, I don't know, but it can't be good.

But not everyone agrees with me. In fact, I don't even agree with me, because I have plenty of time-wasting games on my phone. However, some people disagree so much that they decided to go ahead and make a timewaster that you play at the kitchen table. They called it Revolver.

Revolver has a story, and it has a body count, so I should love it. I don't love it, but I liked it OK. It's a fun fifteen minutes that you can sweep into the box when you're done. It plays just long enough to distract you while you wait for your Hot Pockets to finish nuking and then cooling down enough that you can eat them (have you ever bitten into a Hot Pocket right out of the microwave? The name should be a hint, but let's just say that when they say 'hot pocket' they mean 'pocket full of searing magma that will burn right through your tongue').

There's actually some pretty interesting card play in Revolver, which is nice in a game that takes less time than you need to watch an episode of Robot Chicken. The bad guy will want to save his cards for when they're important, and not squander them when he's almost guaranteed to lose anyway. He'll want to gamble a little, wondering if the good guys can draw cards to beat him, because he might need that gatling gun at the next location. The good guy has basically the same conundrum - send a herd of buffalo through right now, or hold off for later in case the bad guys are hiding the Jackson clan?

But that's about it, really. This is not anything remotely like a complicated game. It doesn't have the depth to be interesting more than two or three times, unless you're playing it because you have absolutely nothing better to do. It's light and fun and people die. For lots of people, that's high praise.

Me, I like a game with some meat on its bones. I want a longer game that makes me think more. I want to get into what I'm doing. I also like to play a game that isn't over before I can finish a beer. But if I am ever looking for a game that I can set up in half a minute and play through before my wife calls us for dinner, I've got Revolver. It's perfect for when I need some way to not notice that I'm doing nothing of value, and I don't have time to actually do something useful.

Pros:
Neat art
Incredible body count
Surprising amount of story for a game that ends this fast
A little bit of strategy

Cons:
Finishing quickly is nice if you're having your oil changed, but not as great in a game
Not really very deep, but that's OK because it's over before you notice

If you need a card game designed perfectly to waste fifteen minutes, you should run over to Noble Knight Games and pick up a copy of Revolver.
WASTE YOUR TIME
Posted by Matt Drake at 9:01 PM