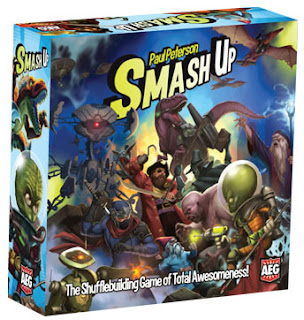 Ninjas team up with zombies to battle futuristic robots and dinosaurs with lasers.

If that sounds really stupid to you, you can stop reading. If, like me, you think that sounds like a buckshot blast of kick-ass, Smash Up might be exactly your brand of psychotic.

In Smash Up, you're going to assemble your deck by combining any two of the eight factions available to you. You might decide that green-skinned Martians work best with the little people from Doby Gillis, or you might put the wizards and the pirates together to see what happens when Harry Potter gets cabin fever on the HMS Pinafore. Then you play your cards and try to grab up bases to get enough points to win.

However you decide to build your deck, you'll only have two kinds of cards. Minions go on bases, and contribute their strength to the contest, and actions mess with everyone else or make you stronger or kill people or buy tacos. You can use tacos to feed to other people at the table so that they will drip hot sauce and liquid fat onto your cards. So you may not want that card.

There are actually lots of different effects in play, and each team does something different. The dinosaurs (the ones with lasers) are really good at being really strong. The pirates can move around a lot, and it's tough to kill someone when they won't stand still. The Martians keep abducting people, and the zombies simply refuse to stay dead. Combine the factions that work best for you, and get ready to blast something with eye lasers and magic wands.

The drafting part of the game, where everybody carefully picks decks to try to balance out their opponents, is a very important part of the game, and requires you to have some experience with the cards. If, for instance, you see your opponent snatch up the gnomes and leprechauns, you know that they have all manner of ongoing actions - and the ninjas will shut that right down. If your opponent snags the wizards, you know he's going to have a lot of chances to play cards, so you're going to have to overpower him. I suggest mechanically augmented dinosaurs.

Then you have to play right. There's a lot to think about, which is how I like my games. You'll have from three to five different places to play your minions, and you'll need to guess how the other people at the table will play on their turns. The bases have different effects, and the various minions have wildly different abilities, and you'll have to consider all of that before you decide whether your freshly resurrected zombie horde will descend on the alien homeworld or the pirate island of Tortuga.

Smash Up really is a very fun game, but it's not perfect. They tell you that there are all these different ways to mix and match, but some are a lot better than others. Some decks are really heavy with minions, and others have a ton of actions. And while actions are good, minions are a lot better. Actions might let you do all manner of cool things, but only minions can grab bases, and grabbing bases is how you win the game.

For example, the fairy kingdom is chock full of outstanding ongoing actions, but doesn't have as many minions as other decks. The ninjas also don't have a lot of minions, but they have cool actions that will shut down all those ongoing actions. But if you build a deck with ninjas and little people, you get a bunch of great cards that are best used to shut down all your own cards. And not enough minions.

Other combinations are staggering. The dinosaurs are huge. The robots will swarm like mutated cockroaches. Put those two together, and you could have an unstoppable juggernaut. By the same token, the pirates-plus-wizards combo deck is crazy powerful and incredibly versatile.

So sure, theoretically you can combine any two decks to play the game, but there are several combinations that are a bad idea, and a few that are a no-brainer. This would seem to contradict the spirit of the ultimate mix-and-match game, and it would seem that way because it does.

On the other hand, once you learn how to play this silly, fast-paced game, Smash Up is a lot of fun. It's not complicated, but it's got some good depth, and if you have the right combination of factions, you'll have a great time blowing up your enemies and laughing as they die. And if they are zombies, they will have the last laugh when they rise from the grave and come right back again.

Cons:
Crazy mash-up theme
Not quite as mix-and-match as it pretends to be

You can't get Smash Up yet. You have to go to GenCon to get one, or you have to wait until September.
Posted by Matt Drake at 5:00 PM

...and I already have a Gen-Con ninja shopper en route!