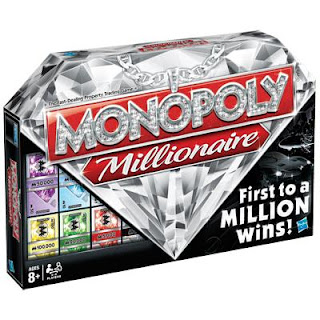 I know that in some circles, it's offensive to say you like Monopoly. It's like walking into a Baptist church and saying you have a thing for naked sheep. But I can't help it, I love Monopoly.

There's awesome deal-making. There's shrewd building. There's timing and calculating odds and a whole lot of luck. Sure, it may take a couple hours, but I don't care. It's two awesome hours, and that works great for me. If you can't finish in two hours, you're doing it wrong.

But Hasbro keeps messing with it. Apparently, nobody ever told them that if it ain't broke, don't fix it. Some reinventions have been kind of cool, like the one where you build parks and prisons and stuff, and the Monopoly Deal card game was actually pretty damned slick. But they're not all perfect. For example, there's Monopoly Millionaire.

This is one they could have thrown back. There are a lot of things wrong with Millionaire, and it looks like they made all the changes to make the game finish faster. Well, as a die-hard fan of Monopoly, I don't want the game to finish faster. I don't want an artificial accelerant added to my Monopoly, any more than I want artificial grass added to my furniture. I want all the underhanded dealing and ruthless maneuvering. I don't want to finish early just because some Euro geek said Monopoly lasts too long.

For instance, they took out two spaces from every side. There are no more trains, no more utilities. They took out the tax spots, too. You can call those spots extra if you want, but they added a ton to the game. Not so much as income properties, since they were capped pretty low, but they were great for trading fodder, and I could always fool - er, cajole someone into giving me a lopsided deal by throwing in the B&O.

They made the pawns upgradeable. You've got three levels of each pawn, so you start out in a go kart, upgrade to a convertible, and then one more time for a limo. OK, never mind, that part was kind of interesting.

They put special powers on some of the cards that would let you do stuff like steal property from other players or jump ahead to the next unowned property. This part I disagree with vehemently, because stealing from the other players should only occur when they don't actually know you're stealing from them. Like if you say, 'look, I'll give you Park Place, and you give me Tennessee, and then we'll both have a monopoly, and yours will be awesome' and neglect to point out that the orange properties get more traffic than any other spaces on the board. And then immediately put hotels on them when the other player is about to land on them, and you steal all their money and they have to mortgage Park Place to pay for the rent they just gave you. And then take Park Place.

But the worst part is that they made the game end when one player has a million dollars. This wouldn't be so bad, but they added zeroes to the end of every bill, and a million bucks is chump change. It's like having a thousand in classic Monopoly, and I've hit that point after someone else bunches of times and still won the game. It's a crappy way to end the game before you get to the good part.

If I had to guess, the Hasbro marketing guys spent five minutes reading comments at BGG, and saw some ADD asshat say that Monopoly takes too long, and they want it to end in half an hour. Then the marketing guys went to the designers and said, 'make the game end in half an hour,' and the designers said, 'but it will suck at half an hour,' and the marketing guys said, 'no, some random BGG asshat said half an hour would make it a good game, so make that happen.' Then the designers looked around at the job market and said, 'since our main employable skill is making board games in a nation where most of the people only play games on their iPads, and we don't even have the programming skills to set up our DVRs, maybe we better do that.' And so they did.

I can see what Hasbro was going for with Monopoly Millionaire. They were trying to make it finish quicker, because today's gamers want their games to end before they accidentally start having fun. But in this case, they have made a big mistake. While previous versions of Monopoly actually improved the game, like the little computer thing that would keep track of your money by swiping a credit card, this one is a failed bit. I wanted to like it, because since the fire, it's the only version of Monopoly I own.

Unfortunately, Monopoly Millionaire sucks all the soul out of the old classic like a Ghostbusters vacuum cleaner. Everything that I love about classic Monopoly is gone, replaced by copious amounts of luck and flashy pieces. I easily admit that this is the prettiest version of Monopoly, and I do kind of like the upgradeable pawns, but that's it. There is literally no other thing about Millionaire that is better than the original, and a whole lot wrong. Skip it. I can't think of a good reason to own this game.

Pros:
Looks really good
I do like the upgrading pawns

Cons:
Fixed what wasn't broken
Took everything that was great about Monopoly and surgically removed it

Don't get Monopoly Millionaire. I'm only posting the picture so you know what to avoid.
Posted by Matt Drake at 9:17 PM

Dad always won Monopoly with those damned orange spaces, no matter how hard you tried to prevent it from happening.

This game stood out even MORE when I went to WalMart the other day - just because of this review.

One of the kids received this game for Christmas so we played it. I have to agree with you on all counts. It ended within 1 hour when the youngest kid (10 year old) amassed the million in cash with pure unadulterated luck. Nobody even owned any houses yet! My first thought was, why even put the houses and hotels in the box?! Not only did they, as you said, "surgically remove the best parts of the game", they made it pointless. You can't get to the good part of Monopoly. I'll concede that it's at least a decent starter Monopoly for the kids and teens. Perhaps *that's* the ultimate goal of Hasboro's marketing department. Win 'em with flash... and the sales of original Monopoly will live on as the kids grow older.

I'm confused with this game. We are big Monopoly fans, so of course my daughter got this for Christmas. We played and it seemed too easy to get to a million. Of course we started by buying properties and then trying to get the whole suit to build, but then I thought about it, if I didn't build and only collected my Go money I was at a million quicker. But what fun is that? And also, how do you actually know you are at a million? Do you include the property value at purchase price? If so then you are constantly having to stop while playing and add the properties and cash to see if you are there yet. That part sucks, adding everything as you go. Makes it no fun. So how do you actually track how much everyone has to see who is there first? And if it is by cash only then why put money out to build? How are the investments you put out into buying property and buying buildings tracked and accounted for towards the million dollar goal? Found the game to be confusing and would rather play to monopolize and win than to gain a million first.

Yeah, I don't remember any more, because I haven't played this since I reviewed it. But I know it sucks, and you should not play it.

We played the game for the first time tonight and actually enjoyed it, althugh the other reviewers are correct in that it ends before you really get going --
I think the remedy would be to be able to purchase an upgrade in the form of additional money (double the amount given) and possibly chance lifestyle and fortune cards - sort of like an upgrade pack - then you could tweak your own rules - up it to 150or 200M, or even revert back to original monopoly rules. All Hasboro needs to do is make an upgrade pack available for this version

With the limited $$ you just cant get too far in the game and the outcome is just pure luck with no strategy.

Can someone tell me what the point of the $1,000 dollar cards (white I believe) are for? As far as I know, they are USELESS!! I played with 2 other people and we did not touch them at all... they were just a waste of space. please help! I can't find the answer anywhere..

Yes, the $1,000 bills are there to remind you to put them back in the box and NOT TO PLAY THIS GAME.