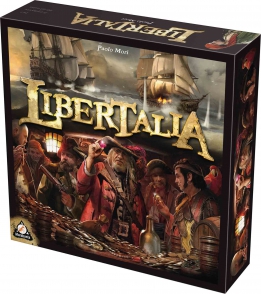 But no matter what people are saying, Libertalia is going to be a big deal. It's an exceptionally fun game with gorgeous art, which is beginning to be par for the course when it comes to Asmodee. In fact, the art is good enough that you'll want to play the game just to see all the pictures. Of course, you could just open the box and look at all the cards to see the amazing illustrations, but who buys a game just to see the art (outside, like, most of us, if we were being honest)?

The art in Libertalia is telling you how good the game is, and it's not lying. This is a really smart game. It's tense and surprising and fun. What could be a simple game of blind bidding for the best prizes becomes a cutthroat power play with more depth than you thought you were going to find.

The basics are pretty… well, basic. There are six rounds of bidding, and you're all holding the same cards. You each pick a card, reveal them at the same time, and then you pick prizes in order of your card's rank. It's pretty easy, and if Reiner Knizia had made the game, you would be done now.

But Reiner didn't make the game, some French guy made the game, and he knew enough to ratchet it all up a notch. Every card you play is a character - the governor's daughter, the first mate, the gambler or the beggar. And every character has a special ability, and they all take place at a different time. The captain gets you paid right now, but he could cost you a lot later. The carpenter is almost the opposite - paying for him now will hurt, but it will be worth it if you can keep him alive for later, when he gets paid double what he cost you.

In fact, the abilities on these characters can be more interesting than the bidding war itself. You'll want the quartermaster to be dead before the end of the week, so you'll have to wait to play your governor (who hangs all the pirates). If you can't get all of the treasure map, the tavern wench will let you cash in a part of it for some quick cash. And if you're just not sure what everyone else is going to play, throw down the parrot and pick your card after everyone else picks theirs.

If this was the end of the strategic decisions, Libertalia would still be a remarkably good game. But it is not the end, because every time you choose, you'll have to take a good look at the pirate's booty (which is great if the pirate is Megan Fox, not so much if the pirate is Ned Beatty).

The most obvious choice for the booty tokens would be to make them all varying degrees of treasure, and just let you compete for them. And about half of the prizes are just that - goods, jewels or chests of gold that are all worth having. But the rest of the booty is interesting and potentially dangerous, like Jennifer Lopez after a Taco Bell bean salad. The saber can be used to kill your opponents. The Spanish soldier will kill your character. The treasure map is worthless unless you can get all three pieces of it, and the cursed mask will actually cost you money later. Sometimes you're not bidding to grab the best stuff. Sometimes you're just trying to make sure you don't get stuck with the booty that has Montezuma's revenge.

(OK, I'll stop. Diarrhea jokes at a game blog? Gross. Just juvenile. Instead, I'll remind you to come to GenCon so I can sign your boobs.)

There are a dizzying number of decisions to make at every stage of Libertalia. Even if you play smart and win the bid, you could still end up picking the wrong prize. Sometimes it's good to get killed. Sometimes it's better to let your opponent get the big treasure as long as you avoid the execution.  Sometimes you'll throw caution to the wind and just try to get your hands on the biggest booty.

(I know I said I would stop. But if you're being honest with yourself, you didn't really want me to.)

Libertalia is a surprisingly deep game, especially since you can read and understand the rules in ten minutes (compared to Mage Knight, which I have been trying to read through for two weeks now). The art is simply fantastic, and the theme is a hoot. Great opportunities for long-term strategy, agonizing decisions, and a complete absence of blind luck make Libertalia an immensely satisfying and engaging game that you can enjoy in an hour. And best of all, you can spend the whole time making crude innuendo about pirate butts.

Cons:
Can't think of one

Since Libertalia isn't out yet, I can't get you a link. But if you go to GenCon, you can buy one. The game, not a link. You can't buy a link.
Posted by Matt Drake at 10:38 PM

Just like to point out that Paolo Mori is Italian ;-)

And Italy is a french province, making him a very specific kind of frenchman.