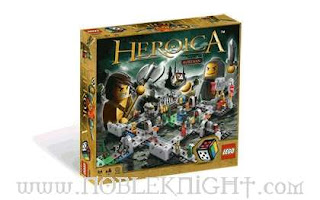 On the other hand, just because a person is particularly good at coming up with interesting ways to put plastic bricks together does not mean that the same person is a master of theoretical game design. Plus Legos are Norwegian or Danish or something. Cultural differences are virtually guaranteed, like naming all the sets weird stuff I can't pronounce.

However, the idea bears exploration. Of course, there are some obvious hindrances. For one thing, can you really expect to find a good orc warlord in a Lego minifig? And how much room would you need on the table to recreate the dragon's lair? And what rules do you use?

Happily, Lego saw all those potential pitfalls and dealt with each one. First hurdle - minifigs. They solved this one by not using minifigs, and instead substituting miniature versions of minifigs. These are very tiny, with just a small amount of art painted on them, and no moving parts. They are not as cool as a minifig, I can tell you that, but they are smaller, so that's something.

The room on the table - this was also solved, because with the tiny playing pieces you don't need much room to make dungeons. Each corridor can be assembled from just a few pieces, and with just a small box of parts, you can build quite an impressive dungeon. Plus you can mix it up and make your dungeon do pretty much whatever you want, and because of these little miniature rooms, you can fit the whole thing onto the table in your breakfast nook (or in my case, the counter in our hotel).

That just leaves the last issue, which would be the rules, and Lego conveniently solved this problem by pretty much not using any rules. Sure, it leaves something to be desired in terms of game play, but you have to admire the simple elegance of a game that you play with virtually no rules of any kind.

OK, that's a bit of an exaggeration. On your turn, you roll a die that tells you how far you move. The die also has hit icons on it, so you roll it when you attack, too. If you hit (which you will, 2 out of 3 times), the monster dies. If you miss, you lose some life. You all run through the dungeon and try to be the first to get to the big bad guy and kill him.

The monsters are spiders and werewolves and golems and stuff, but unfortunately, the only real difference between them is whether their strength is one, two or three. Other than that, they have absolutely no differences of any kind. Fighting a flying giant bat is exactly as dangerous as battling a weak goblin, and that just is not as cool as it could be. I kind of like for my monsters to feel different - sure, they all die just the same, but some should throw sticky webs and some should shoot arrows and some should fly out of reach. Sadly, that's kind of hard to accomplish in a game with virtually no rules.

If you're a grown-ass man, or maybe just a kid who actually knows that dungeon crawls are supposed to be interesting, Heroica still has a lot of potential. Only now, you're going to have to make some rules of your own. The beauty of this game is that when there are practically no rules to begin with, there's plenty of room to expand it.

Personally, I love the whole thing. I got the biggest set for Christmas, and once I built it and loved it, I had to go get more. Now I have all four sets, and I'm putting together some rules that I plan to test with my daughter tonight. I can send my adventurers (there are six in all, if you buy all the sets) from the beach, into the forest, through the goblin fortress and into the mountain lair of the golem overlord. I can rearrange everything on a whim, and add or subtract potions, treasures, magic gates and locked doors. The giant, bouncy die is fun to roll, and once I develop some differences for the monsters, this game is going to be a hoot.

Of course, that exposes the biggest problem with a game like Heroica - once you start tweaking it, you'll never be done. You'll tire of defeating the goblin king, and decide you need a lich. You'll develop special abilities, but then you'll need tougher monsters. And with all this dungeon crawling, there's still no dragon. All of which means I will be modifying the hell out of Heroica for a good long time, until my daughter and I tire of creating thrilling dungeon crawls and battling for very small plastic trophies.

2-5 players (depending on the set you buy)

Cons:
Practically no rules - certainly not enough to make a good game
Not enough variety

Glad to see you liked this one. My boy is six, and this is his first experience with anything like this—he absolutely loves it. We’ve had a blast playing with it so far.

The Mrs. and I just picked this one up for our 7 year old son and he seems to enjoy it. He could definitely handle something with a lot more rules and interesting abilities, however, and I've definitely started thinking about how I can form it into something interesting. Care to share with us some insight as to how you've begun to tweak it?

I think once I have some rules in a more concrete, useful form, I'll probably do another whole post about it. It's a heck of a departure from what I usually do, where I just review the game the way it came out of the box, but this game in particular is simply begging to be modded.