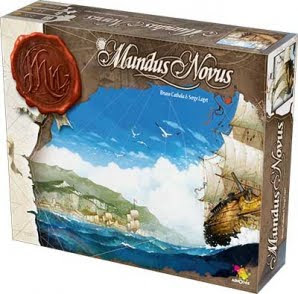 If I were way, way smarter, and maybe went to graduate school in London or something, I would write this review in Latin. It would be awesome and brilliant, maybe even use iambic pentameter. Mostly, it would totally go with the title of the game Mundus Novus, which is Latin for something that I would know if I could actually write stuff in Latin.

And I would write the review in Latin to help illustrate what a smart game Mundus Novus is. It's basically a fully developed trading game pulled from the game Mare Nostrum, which also has a Latin title, and would therefore be far more interesting to read in Latin, except for maybe the fact that nobody really knows how to read Latin, and so the review would actually be, for most people, the equivalent of reading complete gibberish for several paragraphs in a row (which makes it basically the same as this review, but with fewer juvenile jokes).

The idea behind Mundus Novus is that you're all wealthy merchants sailing across the Atlantic to make money in the newly discovered Americas. This theme is so exciting and revolutionary that any gamer worth his wrinkly dice bag will be absolutely overwhelmed with a desire to play the game. I mean, you just don't see games about snobby Europeans exploiting the New World in the late Renaissance period. In case you're wondering, no, I cannot figure out how to put more sarcasm in this paragraph.

But even with a back story about as fresh as a used Kleenex, Mundus Novus is a very clever game. It's also very focused and pretty damned fun, to boot. It's like if you took an entire game about global conquest, surgically extracted the most intellectually challenging part, then injected it with Super Soldier Serum and anabolic steroids until it was like the board game version of Mr. T. It keeps all the parts it needs to be awesome, and for the rest, it just does not have time for no jibba jabba.

The goal of the game is to either have ten different kinds of resources at the same time, or to accumulate a buttload of money by building sets of cards. You only get five cards every turn, and you discard them at the end of the turn, so making a set of ten is problematic, to say the least. So to improve your odds of success, you need to pick up the crazy ability cards, which you get by building sets of cards.

Every turn, you'll all choose some cards to put up on the block, then take turns swiping the stuff in front of your friends. You don't get to choose a card unless someone chooses one of yours, so it's worth your time to put some good stuff out there. Plus there are other advantages to putting out really good cards, like the chance to go first in the trading or pick up the best ability cards. Of course, if you put out all your best cards, you might get a very nice ability to go with your hand full of absolute garbage that you have because you gave away all the good stuff.

One thing I love about Mundus Novus is the subtle layers of consequence and decision-making. For instance, you might decide to try for a hand containing three high cards, to grab that double-sized warehouse, but to do so, you only offer up some crappy low cards. Then someone else gets to go first, and you get shut out of the trading, leaving you with a bunch of nothing to reward your greed. Or you might decide on a lower set, but the sweet goods you put out there wind up letting someone else build a much better hand than yours, and then they get that sweet warehouse and you wind up with a dirty sock.

We also really enjoyed the various potential strategies. You could try for a huge hand of varied cards, to grab up the instant crazy-combo win, or you could go for a big earner with lots of recurring payoffs. You might exploit the events to hinder your opponents, or you could just get nasty and never let anyone else get ahead. It's actually kind of deceptive - every time we think we've figured out one particular preferred strategy, someone at the table breaks it and sweeps the win out from under us. Like I said, this is a smart game. I'm a little ashamed at not being able to write the review in a dead language.

It's also a beautiful game. It's an Asmodee game, which makes the amazing art no surprise, but even still, it's hard to imagine how it could have been any better looking. The visual design is impeccable. The cards are fantastic quality. The artists for Mundus Novus should be very, very proud of their work. If I knew how to say, 'holy crap, that looks good' in Latin, I totally would.

But then, if this review had been written in Latin, it would be very snooty, and might give you the impression that Mundus Novus is a game only fit for Mensa members and ivy league academics. And if the game were that hard to play, it would not be anywhere as smart. Being a smart game means that dumb people can play it, but smart people will win more. And that's definitely the case with Mundus Novus - this game is deep and clever, but it's surprisingly easy to learn.

So it's probably just as well that I don't know any Latin. On top of being able to write this review in a language most of you can read, it also means that I won't have to replace all my t-shirts with cardigans. But in the absence of thoroughly brilliant writing, I'll have to settle for blunt. And here it is - Mundus Novus is fun and smart and pretty. If you visit a redneck bar in Arkansas, those same adjectives can be used as a pickup line. You're welcome.

(Please note that those words will not work in a redneck bar in California, because then you have to include some reference to either organic artichokes or pretentious-but-affordable white zinfandel).

Pros:
Focused, intelligent trading game
Wastes nothing - every part of the game is useful and important
Incredibly attractive
Very fun and exceptionally interactive

Cons:
Theme worn out worse than a bald tire

Mundus Novus is very affordable, especially considering what a great game it is. Unfortunately, it's not out yet, so you'll have to wait until Asmodee actually releases it to buy a copy.
Posted by Matt Drake at 6:30 PM

I think the translation of the title is something like "Mundane Navy" which I'm pretty sure was what the theme for the game is.

Sounds like it's worlds more interesting than that - I'll have to give it a try if I get the chance.

I met the artist, Vincent Dutrait in Essen 2011. Really nice guy. The amazing thing is that he still paints everything in an "analogue" old way, pencil, brushes, pen etc... no Photoshop shenanigans.
Awesome looking game!
Totally agree with your verdict of the game!

I am wearing a woolen jumper

I also agree. There is a lot of depth to this game, of which I just scratched the surface. I got a chance to play this game at Alpenfestung last month and had a great time with it.