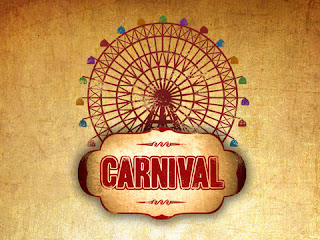 I just got this game called Carnival. Now, when I first opened the box, I was hoping it would have an 'e' on the end, so that it would be Carnivale, and it would be like that crazy HBO show and you would travel the US during the Great Depression and Satan would take on the guise of a Baptist preacher who also used to be the Kurgan from Highlander. But it's not.

It is pretty cute, though. It's got kind of a Reiner Knizia feel, but without boring math exercises. It's fairly simple, but it has some neat twists that you haven't seen before, and they force you to think on your feet while you make plans in your head. They don't have a blind guy drinking absinthe over a spoonful of sugar, but that's not really kid-friendly, anyway.

The idea of Carnival is that you're trying to build four out of your five rides before anyone else can get them done. Each ride needs banners, lights, seats and materials, and if you're paying attention at this point, you can probably spot pretty quick that the theme in this game is almost completely unnecessary. It's a set collection game with randomized actions, which is another way of saying it's a heck of a lot like a Reiner game, which I already said.

To build your sets in front of you, you'll roll some dice and put them on a card that will tell you what your actions are for that turn. This is basically how you get more cards in your hand, or how you steal cards from your friends, or how you screw up their sets so they can't win. It's not a mean-spirited game, but it is fairly competitive, and that's OK with me. It also went over alright with my family.

Of course, the dice can be pretty capricious, as anybody who has ever rolled dice knows full well, so to give you a little more control, each player also has three tickets. You can burn a ticket to manipulate the dice a little, or just reroll all of them. You can also throw one away to block some mean bastard's attempt to screw up your pretty sets. But you only get three for the whole game, and you're going to be sorely tempted to use them all in the first three turns. But don't. You're going to want them.

Now, I said the theme in Carnival was pretty disposable, and yeah, it is. But it's implemented so well that I would actually be a little disappointed if this were just played with a deck of regular ol' Bicycles. The art is charming and attractive, and while I certainly don't get the feeling that I'm a traveling carnie setting up hilariously unsafe sideshows for unsuspecting townies, I did find myself drawn to the simplicity and basic beauty of the game. It doesn't try to do more than it should, and the design manages to make the game easier to play and more pleasant to see.

Unlike the HBO show that I was really hoping this game would be about, Carnival is not terribly deep (it is also not frighteningly twisted and full of deception, and that definitely makes it more palatable to the average American family of four). It is a little on the light side, but still has enough meat to attract a serious gamer who wants to play with a couple junior-high kids and a visiting grandmother. It's engaging and smart, and fun to look at. The only part of the HBO show that was like that was Adrienne Barbeau. The rest was just weird (and really, so was Adrienne Barbeau).

Cons:
Theme is just there to be pretty
Not overly deep, and very Euro

Carnival is one of those games coming out of the Game Salute deal, which means Noble Knight Games doesn't have it. The only place that does have it (and they just have it set for preorder) is Game Salute. It's a decent game, but I can't tell you where to save any money on it, because the only place you can buy it is charging full retail:
http://shop.gamesalute.com/collections/front-page-1/products/carnival
Posted by Matt Drake at 2:54 PM

I plaid this last weekend and I liked it. It had that Monopoly Deal feel but you were at the mercy of you dice rolls and not cards in your hand.

I especially liked the fact that you could use your tickets to block a deal that did not directly involve you.

(It should be disclosed that I'm a huge Euro fan)