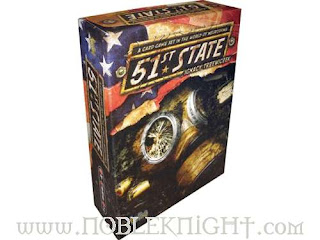 Neuroshima is the coolest setting that was ever ruined by a board game. And the crazy thing is, the games that ruin the setting are great games - but they suck at playing up the setting. Neuroshima Hex is a brilliant game of careful placement and long-term planning, but it has virtually nothing to do with killer robots or mutated plants, aside from some pretty pictures.

51st State does a better job of playing up the theme, but only marginally, and now it feels way too friendly to be a game about killing bands of roving marauders. It has a lot of similarities to Race for the Galaxy, and like that Puerto-Rico-in-space game, really does help to deliver the feeling of building a nation from the ground up. In fact, I would say it's even better than Race for the Galaxy, but it still doesn't address my main problem with either game. Namely, you can raise powerful armies and hard-hitting raiders, but you can't send them to hit other players. If I'm playing a game with bloodthirsty armies, I want to use them, and not just to beat up the cards.

The idea behind 51st State is that, in the wake of the nuclear destruction of the United States, you head up a nation attempting to build a new nation from the ashes of the old. Your opponents are doing the same thing, but only one of you can come out on top. So instead of having a race for the whole galaxy, you're really just racing for the East Coast.

There are so many great concepts in 51st State that I'm really only going to hit on a few of them. My favorite is how all the different locations can serve three different purposes. For instance, say you find a bar full of gun-toting wastelanders. You can ride up with a couple tanks and kill everybody, then steal all the liquor and guns. You can negotiate with them and get a regular supply of small arms. Or you can bring them into the fold, thereby allowing all your soldiers a place to fire guns in the air and disco until the bullets come back down and kill their dance partners.

However you decide to exploit a location, you're going to have to pay for it. If you decide to settle it, you'll need a different resource than if you decide to burn it down. Every faction has three cards they can use every turn to generate the specific resources needed for conquering, negotiating or incorporating - but you can only use them once. And to make things more complicated, you have to buy the resources on those cards with other resources.
The goal of the game is to earn victory points (so no, that's not all that original), but you don't just count up every turn. You can build up points with special actions that will be counted every turn, so early investments can pay off big down the road, as long as you don't screw it up and wait too long for your big play. You can hire leaders and use them to earn these recurring points, then kill off the leader and get another one - just to build up more points. There's a very delicate element of timing and planning that can pay off huge, if you exploit it, or ruin the unprepared.

Unfortunately, it's not all wine and roses. Nothing is easy in 51st State, and I don't just mean for the guys who live there. There's an unnecessarily complicated series of resource generation steps that means you have to invest in raw materials, then in ways to use those materials, then in ways to spend them. This is actually where 51st State starts to bog down. A typical transaction might go like this:

1) Discard spoils to gain workers.
2) Send workers to round up some gears.
3) Swap gears for negotiation points.
4) Spend negotiation points to play a card.
5) Wonder out loud why it takes four steps to do something that probably could have been accomplished in one.

This complication adds a few cascading downsides, too. For one thing, instead of having just two or three icons for resources, there are eight or nine. And since the icons relate quite a bit of information (and the game was originally Polish), there are no words on the cards describing what the icons mean. If you thought it was tough to remember what all the icons meant in Race for the Galaxy, you're going to need night classes to learn the pictures in 51st State.

Another problem is that a game that requires all those resources also requires tiny cardboard circles to represent them. You'll have a pile of chits depicting everything from indentured servants to clay bricks. And in a production decision that I can only assume still causes the publishers to shake their head at their own oversight, these chits are made out of fairly thin cardboard, making them virtually impossible to pick up. I finally broke down and stuck a piece of gum on the end of a ruler, and used the gum to pick up the pieces (I did not actually do that. Instead, I just dropped them all over the place).

But all these are secondar compared to the biggest complaint I have about 51st State - I want to shoot my friends. I've raised a howling, rabid pack of mutant ass-kickers, and I want to use them to burn down enemy encampments and get mud all over my friends' carpet. Instead, I have the option to send my guys to work for my opponents in exchange for a box of bricks. It's too damned cooperative. If I want peaceful coexistence, I'll play a game by Oprah Winfrey.

So I do have some pretty valid complaints about 51st State, and I haven't even mentioned how complicated the rules are. But I don't want to give the impression that I didn't like the game. In fact, I loved it. We played it a bunch, just because of how much fun we were having. We played it wrong, because we didn't understand a few of the rules, but we still had such a good time that we kept coming back for more.

Even with all the downsides, it really is quite fun to start with almost nothing and build up this powerful nation of ruined airplanes and mutant hamburger stands. It's an excellent blend of tactics and strategy, where you decide on a direction early in the game and then see it through with smart plays as the game progresses. The art is great, and the game has plenty of tension as you push to get just one or two points ahead of your opponents before you hit the finish line and the game ends.

If you hate Race for the Galaxy, you're probably not going to enjoy the amount of mental effort it takes to play 51st State. In fact, you might be completely confused for the first couple games, because all those icons really do take some learning, and can become an avalanche of indecipherable information. But once you get it down, you might find that all the complication and tricky rules make for a game that is wonderfully engaging and just a bunch of fun.

Pros:
Build a nation out of nothing
A great mix of long-term planning and quick thinking
Fantastic art
Every decision matters

Cons:
Unnecessarily complex
Tiny pieces that you can't pick up without very sticky fingers
Not anywhere near as much interaction as it should have

I enjoyed the crap out of 51st State. If it sounds like your kind of game, you can pick it up from Noble Knight Games, and save yourself a few bucks:
BEFRIEND THE MUTIES
Posted by Matt Drake at 5:45 PM