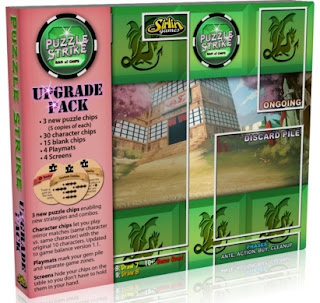 Usually, when I review an expansion, the end result is usually, 'if you like the game, get the expansion.' It's rare that I play an expansion and go, 'why the hell would you get this?' For one thing, people rarely need reviews to get expansions, because most expansions are basically whatever you liked about the original game, plus some more.

Unfortunately, that's not always the case. Consider, if you will, the Puzzle Strike Upgrade Pack. After rooting through this expansion and playing it, I've come to the conclusion that there is virtually no reason to buy it.

Keep in mind that Puzzle Strike is my second-favorite deck-building game, right after Nightfall, and so I was very excited to get the Upgrade Pack. I'm not cursing the expansion because I hate the game - I love the game, and I really like the new chips that are in the upgrade.

The problem is, the upgrade only has three new chips. Three. As in, less than four. When I get an expansion, and have played the original into the ground, I want it to give me a bunch of new reasons to play. While these three new chips are really cool, there are only three of them. After a couple games, I will already be bored with the new stuff.

That's not all that's in the pack, of course. There are also cardboard screens and mouse pads with art on them, plus updated character chips. But the game I already had contains character chips, and I didn't need a completely new set. They're not new characters. They're just the same characters, but with some balancing. If you ask me, they should have been in the original.

And while it's great to have a mouse pad tell me where to put my discard pile, I never had a problem playing without the pads. I have always managed to remember which pile is my gem pile, and which is for discarded chips. These pads are not something I need. Of course, if you tend to accidentally throw your gem pile into your bag instead of your discards, the pads may come in handy - in which case you could draw a couple circles onto a sheet of notebook paper, and make your own.

Same with the screens. I've always managed to either hold my chips in my hand, or lay them down and cup a hand over them. I have not needed a screen to keep my chips secret. But now there are four cardboard screens, and if I really needed screens, I could have made them with a couple index cards. Basically, if you have access to office supplies, you don't really need this new stuff.

Which leaves me with an expansion for one of my favorite games that only barely expands it. The three new chips are really cool, I admit, and I am glad they're in the pack. But I don't need the other stuff. I won't use it. I don't see a compelling reason to pick up the expansion, unless you just really want those three chips.

I'm actually very disappointed in the Upgrade Pack, because of how much I enjoy playing Puzzle Strike. When I heard about an expansion, I was giddy, hoping for a wide variety of exciting new ways to play. I was looking forward to exploring new strategies, discovering new ideas, and playing new games. Instead I got a minuscule expansion surrounded by crap that doesn't even fit in the original box.

I can't say that nobody will want the Upgrade Pack. Two of the people who played with me were delighted with the player mats and screens. And I've heard from others who were very pleased with the balancing edits made to the character chips. And, of course, everybody agreed that the new puzzle chips are great.

I really hope that there's another expansion in the works for Puzzle Strike, and if I had my way, the only thing in the expansion would be more chips. More actions to buy. Maybe even different characters, or new crash chips, or a double-combine. Because I feel like this Upgrade Pack was a missed opportunity, and while it will definitely appeal to some fans, I just kind of feel like I ordered a Big Mac and got a McNugget.

Cons:
I could have made my own play mats and screens
The updated characters should have been fixed before the original released

Noble Knight Games isn't carrying the Upgrade Pack. That's fine, though, because I can't think why you would want it anyway.
Posted by Matt Drake at 2:49 PM

That's sad! I was hoping for more than three chips... And, I don't want to pay for mats and screens...!

I feel the same way. I already have player mats. They have a free download on BGG of almost the exact same art you can print out yourself. I just printed out 4 copies on my laserprinter and then laminated myself. And the screens I agree aren't necessary. Sadly I don't want to pay $35 with shipping for 3 chips and rebalanced characters. I didn't have a problem with the original characters actually and we don't play enough that anyone cares if they aren't perfect.

What you have to understand is, this isn't really an expansion at all, it's a balance patch with some added-value content thrown in to help justify the expense, since a patch made of physical cardboard chips can't just be given to players free like a video game patch can (at least not if Sirlin wishes to remain in business). And it absolutely was needed - in high-level play, Valerie was winning around 50% of the time. It's so bad that in my group, she's banned until we get the upgrade kit.

See, that is interesting news about the balance issues. We never have that problem - I like to play the rock guy because he's made out of rocks, and my buddy likes the panda because he's a panda. We play a lot, but we certainly don't encounter anything like 'high-level play.' We just play.

I did just get word from the publisher - there is an actual expansion coming with as many chips as are in the original. Now THAT is exciting. I can't wait.

"I did just get word from the publisher - there is an actual expansion coming with as many chips as are in the original. Now THAT is exciting. I can't wait."

Yeah! Thx for the info!

I always enjoy reading your reviews. And despite the fact that I agree with you totally that this is no auto buy for everyone I think this review is unfair.
Because of the simple fact that it is reviewed like an expansion which it is not - hence the name upgrade, not expansion.

It was a balancing patch. It was made available for free as print and play version to anyone who bought the game. Which can't be done for the rwal game peaces.

Sirlin just wants to make his game better. This is great!

Other publishers either don't do anything to fix issues that come after the release
OR make a brand new version of the game: want a game that works as intended then buy a WHOLE NEW game. Nobody complains about that.
Sirlins approach is much more customer friendly and he shouldn't get punished for it.

I want to say again that I agree with you that everybody has to consider whether he needs this upgrade or not (i don't).

Not everybody should buy this, but not because this is a bad expansion but because this is an upgrade that is only relevant for players who experience the balancing problems - maybe only for really competetive players.

Thanks and keep up your good work.

I don't understand this review at all because this isn't an expansion, and was never claimed to be one by anyone. Maybe rewrite the review with the correct expectations? They are making an expansion but this was an upgrade pack to enhance the original game.

I think it's great that someone cares enough to maintain the game for competitive players. Also the extra components seem cool.