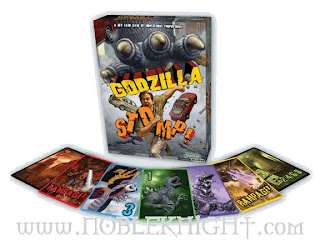 I want to know who came up with the term 'Kaiju'. I'm sure it was someone in Japan. It doesn't make sense that it would have been an American, because no American would have invented a term so cute to represent giant rampaging monsters who regularly eat pieces of Tokyo. The word sounds like it ought to be a cuddly little fantasy beast who has a magical sneeze that cures the common cold. But whoever invented the word, a whole lot of people who have never been outside the United States know that it means 'Godzilla and Friends', and so it gets slapped all over games about blowing up cities with twenty-story-tall lizards and mutated moths.

One such game is Godzilla Stomp, in which players compete to trash the most buildings. It's a very simple game that takes about as long to play as it does to explain the rules (which is about five minutes). Each player chooses a monstrous menace from among some fairly famous movie stars, like Mothra and Battra and of course the big man himself (or, I guess, big lizard), Godzilla. Then you get six cards with pictures of your favorite city-basher, and try to pick up some killer points. You don't train your adorable pet to evolve into a larger, also-adorable pet, because that's not actually what Kaiju means.

It really is simple. You have five cards numbered 1 to 5, and the last card says, 'Rampage.' There are a bunch of cards on the table, buildings with values on them, and everybody chooses a card at the same time. The highest played card takes the first building, and then everyone else gets one in order, unless you played Rampage, in which case you go last, but you get everything that's left. Also, there are power plants with variable values based on how many you have wrecked and a tie-breaker mechanic based on who got the last card.

Now you're probably going, 'that's it? That's the whole game?' And my answer is, 'yep, that's all.' Kaiju are fairly simple creatures, with fairly simple needs. They break things. They don't like to complicate it with fancified rules. They excel at mayhem, breathing lightning and eating cars and what-not. They don't like to be bothered with dice mechanics and turn order. They also don't require the love only a young child can offer. They would rather have the arms and legs a child can offer.

The thing is, while that simplicity might make them fun to watch on a rainy Saturday afternoon as they descend from the sky or rise from the ocean to turn Tokyo into a steaming ruin, it doesn't make for much of a game. Godzilla Stomp contains marginal decision-making at best. Calling it a light game is like eating a single popcorn kernel and calling it a light lunch.

I don't mind a light game, but I would like it to have at least a little meat on it. Godzilla Stomp isn't stupid, and it does what it means to do, as long as what it means to do is help you unwind between taxing rounds of tic-tac-toe. It just happens so fast that you'll finish the game and wonder if maybe the designer thought Kaiju really were pink furballs with electric tails.

Now, I'm sure that if I spoke Japanese as a first language, the word Kaiju would instill a sense of wonder and terror that can only be inspired by a creature the size of Mechagodzilla. And then maybe I would play a game like Godzilla Stomp and think, 'wow, that was terrifying!' But probably not. Probably I would be disappointed that the biggest, meanest motor-scooters who ever took a bite out of a big city were distilled down into a five-minute numbers exercise.

I didn't hate Godzilla Stomp. I also like popcorn. But I want more than one kernel of popcorn, and I want more out of a game than Godzilla Stomp provides. If you have to entertain some kids with very short attention spans, you might see a reason to pick up this game. But I play with grown-ups who are used to games that make our brains sweat, and we were all pretty underwhelmed.

Cons:
Decided lack of meaningful decisions
Not much game in this game

If you really want to try out a game this light, you might as well save a buck on it and get it at Noble Knight Games:
NEITHER FUZZY NOR PINK
Posted by Matt Drake at 2:13 PM

For those familiar with "For Sale", this game is essentially just the second half of that game. The designer said he'd never heard of "For Sale" before and I don't mean to say that he ripped it off. I'm just saying that this game is an even SIMPLER version of an existing game that was already simple to begin with and I believe it's pointless to own this one.

Personally, I quite enjoy this one. Sure, it's light but so is a single hand of Poker or a single round of Asshole. The whole point is to play multiple rounds. Take your time, keep score, trash talk a little, you know - have fun. Popcorn is soooo much better when you eat it by the handful rather than a kernel at a time.