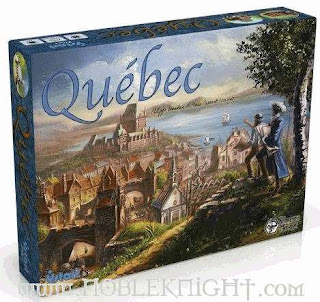 If I were a history teacher, I would have a bunch of different ways to teach history. There would be all manner of interactive lessons, theme days, and stirring lectures. However, one method I would not employ in order to teach history would be to play board games.

At first glance, Quebec (the game, not the city) seems to be a history lesson in a box. You each play a different family attempting to stamp your name on the legacy of Quebec (the city, not the game). To do that, you'll spend four centuries building the city and jockeying for power, whether you buy off politicians, sponsor plays, or build churches. Personally, I think it would be more effective to simply let everyone in the class dress as their favorite Canadian.

As a historical reference, Quebec (the game, not the city) is unfortunately lacking. However, as a game, it is charming, thematic and full of depth. You will feel like a powerful magnate manipulating the future of a city. That city could be Quebec, or it could be Ice Station Zebra, or it could be a colony on Mars. Historically, you won't really care about how Quebec was built (the city, not the game), but you'll definitely have a vested interest in building the best city you can. If you want to find out how Quebec was really built (the city, not the game), you can have Canadian food day, and everyone will bring in bacon and beer.

In an ironic gesture, the game has no violence at all. This is ironic because the city most definitely had a lot of people die, especially since it's 400 years old. If nobody had died, it would be chock full of geezers who didn't have enough room to maneuver their oxygen tanks, and they would be actively bankrupting the social security program. And yet as you play Quebec (the game, not the city), you will never once kill anybody. However, everyone knows Canadians are peaceful people, so it's no surprise the game doesn't have a body count.

What it does have is a fantastic amount of intelligence. You'll form strategies right from the outset, and every turn will be spent advancing the plan you think will help you win. Everything you do has layer upon layer of consequence, too - you may just be helping to build that cathedral because it will let you move your workers into position for next turn, but it also means you're exerting more influence over the city's religious development, which could create a chain of events that scores you a bunch of points and puts you in a better position for next round - which won't happen for half an hour. It might also mean you miss a great opportunity to improve your standing with the city's political leaders, or hamstring yourself and allow an opponent to sweep in and turn that opera house you've been eyeballing into a motel that charges by the hour.

Another excellent feature of Quebec (the game, not the city) is that while there is a ton of interaction - in fact, you will rely on it - it's not overly confrontational. There's minimal amounts of screwing your friends, which is nice if you play with people who don't like it when you steal their stuff and leave them bleeding out on the sidewalk. Canadians are all about cooperation, which this game will teach us, though I think the lesson would have been better taught by having everyone team up to build collages on poster board.

In case you're not picking up this vibe so far, I'll be real blunt - Quebec (the game, not the city) is very European (obviously the city is not - it's Canadian). Where most games that earn the label 'worker placement' call their little wooden cubes meeples, soldiers, farmers, or disgruntled postal workers, this game actually comes right out and calls them workers. It's that European.

And it's not like it's a dead sexy game, either. The first night I got it, I opened the box, looked at the contents, said 'man, that looks boring,' and closed it again. It's a good thing I'm here to tell you about these things, because if you just judged Quebec (the game, not the city) by appearances, you might be very inclined to skip it. But that would be a mistake, because even though it does not look very fun, it's a really interesting game with a fantastic amount of interaction, virtually no luck, layer upon layer of strategic decisions, and best of all, it really does make you feel like you're building a city that may or may not be Quebec (the city, not the game).

I really do think that board games are a crappy way to teach things, and this particular game has not changed my mind. I do not know any more about the history of the city for having played the game. As an educational tool, Quebec (the game, not the city) fails completely. As a game, it's a masterpiece. Although I did learn one thing - I learned that before I die, I really ought to visit Quebec (the city, not the game).

Pros:
Feel like you're building a big historical city
Incredible long-term repercussions with every move
Exciting despite a complete lack of bloodshed
Lots of interaction, and most of it is helping each other

Quebec is a little on the pricey side (the game, not the city - though the city might also be expensive). But if you want a copy, you can score a heck of a deal on it at Noble Knight Games:
THE GAME, NOT THE CITY
Posted by Matt Drake at 3:02 PM

Never been to Quebec and I didn't know it even existed (the game, not the city). And I agree with you: this game ain't gonna teach me anything about history, the same as Carcassonne, Le Havre or Puerto Rico won't make me wiser (maybe PR will teach some/many people that Spain is not in south America, which is an extended belief in the USA that annoys me, given that I am a Spaniard myself). Anyway, I loved the review and your recurrent jokes, keep kicking (game) asses.
By the way, I'm the guy who asked you for a Le Havre review ;)

I think games has to be self-sufficient, yeah it'S cool to have a great theme and in Quebec the theme inspire a great mecanism, but I don't think a game as to teach you historical things or something like that, games teach you logic, strategy, planning.

Thx for you review, I think Quebec is one of the best 2011 game!

I'm from Quebec (the province, not the city or the game) and I'll check this game for sure!

Thx for the review!

Quebec (the city, not the game) is rather European and expensive.

You're wrong Matt, I've successfully taught my students writing (generating ideas) with Dixit, vocabulary with Apples to Apples, narrative with Fabula, measuring with pitchcar, potential and kinetic energy as well as force effects with Angry Birds (both knock on wood and digital version) properties of light, reflection and refraction with khet 2.0, etc. Games are definitely effective tools man but its definitely tricky. Not to mention all the skills that filter through in all games. Oh! Almost forgot, we do basic Math facts (adding, subtracting, multiplying and dividing) with my Heroscape cards.

Enrique, how dare you disagree with me!

No, wait, you're probably right.

No, forget it. Yes, you can teach stuff with games. Heck, my daughter only knows where Kuwait is because she played Ten Days in Asia. But for a really effective teaching implement, try a book.

However, no matter how educational games can be, you won't learn more history from Quebec (the game, not the city). You will, however, have a good time. And that is why I play games. If I want to learn something, I can always listen to Sarah Palin.

Educational vs non-educational: At least in conflict simulations, like Avalon Hill's Kingmaker, you get a detailed description of the historical situation the game is trying to simulate. Often such games will include design notes. Eurogames typically do not do this. I fully agree with Matt here that you do not really learn about Quebec. The tile depict various historical buildings, but as far as I know there are no explanation of the buildings they depict.

I am surprised that Matt did not comment on the colors and funky round tiles. I find the design very ugly and unstructured. It seems designed to make you hunt for the best tiles. I am not sure hunting for the best tile should be part of the game.

As far as screwing the other guy, I find that you can force others to take less desirable tiles by jumping off your tile early. You score fewer victory points, but can shut out the other players to a certain extent.

I have a session report here.

For historical games that do educate, try Revolution '76 (very old) or Stalin's Dilemma (available online; track down version 2.0 if you can).