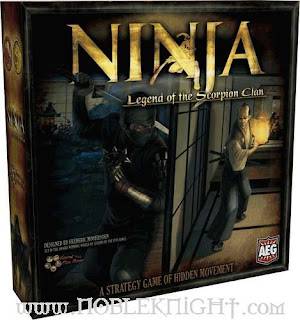 You are ninja. Clad all in black and armed with poison, blade and shuriken, you creep silently over the wall of the daimyo's compound and into his palace. You glide silently through the corridors, hunting the lord of the land, intent on shedding his blood to fulfill your ancient contract. You creep like a shadow to the very door of his room, slip inside, and promptly stumble over a pile of folded clothes and fumble around the room like a drunk wildebeest. Then guards stab you.

OK, you're not really that bad at doing ninja stuff. Well, you probably are, because your asthma makes you wheeze and you are about as graceful as Ethel Merman stomping grapes. But if you play Ninja, you get to be a really bad-ass ninja, unless you're playing the guards, and then you get to be about as clever as a bag of ripe fruit.

I tend to be somewhat skeptical of hidden-movement games. There's no way to ever really know if your opponent is cheating, for one thing, and for another, one innocent mistake or misplaced pencil mark could completely screw up the whole game. Plus after I played Escape From The Aliens In Outer Space, I kind of wanted to swear off these mark-your-movement-on-a-hidden-pad games altogether.

But Ninja is pretty cool. For one thing, only the ninja player has to hide his movement. The other guy has nifty plastic minis to show where all his guards are. For another thing, most of the stuff in this game actually works, as opposed to Escape The Aliens, which was mostly just stupid.

As the ninja player, you'll have two bad guys roaming around the castle compound, intent on mayhem and discord - and they're trying really hard not to get caught. You can move faster than the wind, and strike with deadly skill, but the guards you have to outwit are not exactly mall cops, and they'll perforate you like a spaghetti strainer if you're not careful. You can run when time is of the essence, and when silence is more important than speed, creep slowly past the watching guard.

You'll have a handful of cards for each of your villainous intruders, cards that can be used to quietly dispatch the searching guards, distract them, or escape capture. These cards can be very powerful, but you don't have very many, and you can only use each card once per game. You never have to reveal your location until a guard stumbles across you, and if you use your cards right, you can take them down with a shuriken in the knee before they raise the alarm.

It may sound like the guards have a hard time of it, but remember, these are trained samurai walking the grounds. They're not just flashing a torch into the corners and yelling at kids to quit necking in the back seat. They'll stop every now and then and listen for intruders, and if the ninja player has been sloppy, you'll have a chance to go running off after the bad guys and throw down some steel justice.

Plus there are a ton of guards. You'll start the game with a decent handful, and as you go, you'll wind up with as many as 20 pipe-hitting warriors patrolling the grounds. Some of the guards are sleeping at the beginning of the game, but as the game progresses, they're going to wake up and start running aroung like the Keystone Kops playing lacrosse with the F-Troop.

The only thing is, where the ninja player can go wherever he wants, you're stuck using cards every time you want to make a move. At the beginning of the game, you'll have plenty of options, but by the end, you're going to be groaning when you discover that even though you know right where the traitorous fiends are hiding, your cards will only allow you to pick the lock on the outhouse and throw cherry bombs in the toilet.

Ninja is a hard game to win. For the killers to win, both the bad guys have to accomplish their hidden goals and get out. For the guards to win, they have to kill both of the bad guys. If only one murderer gets out alive, the game is a draw - and since that's about the most likely result, not very many games of Ninja are going to end in a decisive victory for anyone.

In fact, while I do like the mechanics of Ninja, and think that the pieces are simply brilliant, the end of the game is likely to be very unsatisfying. You'll maneuver around, playing cards and positioning your forces, and then after you spend an hour or so working hard to outwit the other guy, the game ends and nobody wins. That's incredibly frustrating.

But even though the end of the game can be a let-down, the part where you're playing is ridiculously tense. Over and over, the ninja player will be just one lucky move away from getting caught. And time after time, the samurai player will be hot on the trail, just to have his prey escape at the last second. Every time you play, you're going to want to go back over the events of the game and relate all the places where the good guys almost got the bad guys, the time when the ninja escaped by hiding silently in the corner, and how the patrolling guards were just seconds away from stumbling across the nefarious murderers.

There were a few other problems with Ninja, like the fairly confusing rules for the secret tunnel, but those will vanish after you play a couple times. My only serious beefs with Ninja are that it's too easy for the samurai player to wind up with nothing he can do, and the fact that far too many games end in a tie. If you like a game that will literally get your heart beating faster (and I am using the word properly - while playing Ninja, I could seriously feel my heartbeat speeding up), Ninja does a spectacular job of both telling a story and just plain being exciting. There's a lot of bluffing, sneaking, and outwitting, and those make for a pretty fun game where I'm from.

Cons:
Poor card draws can cripple and frustrate the guard player
Too many games end in a tie

If you feel like creeping around in the dark, run over to Noble Knight Games and pick up a copy of Ninja. You can even save ten bucks in the process!
IF DO RIGHT NO CAN DEFENSE

If you like this sort of game, I would highly recommend Letters from Whitechapel.