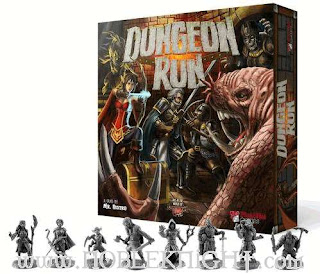 I've made a lot of friends because of reviewing games. For instance, I got a review copy of HeroScape, which I loved so much I had to find a fan site, which led to a trip to GenCon, and led to a lot more stuff, and eventually to making friends with some truly amazing people.

One of those truly amazing people is Colby Dauch, the creator of Summoner Wars and proprietor of Plaid Hat Games. He's not only a good game designer, but a savvy publisher and one of the flat-out best guys I know. And that's why it causes me all manner of anguish to have to review Dungeon Run, which I did not like very much at all.

The problem is even worse, though. See, not only is Dungeon Run published by my friend Colby, with whom I have sat until 4 in the morning talking about nothing in particular while I drank hard liquor and used extraordinarily foul language, but the game is also designed by Mr. Bistro (not his real name), who is ALSO a friend. Hell, even the guy who sculpted the miniatures is a friend. Hopefully all these guys will still be my friends when I finish this review.

Dungeon Run should be awesome. It's set in the world of Summoner Wars, where a band of competing adventurers dives into a dank dungeon to chase down a summoning stone. Monsters pop out of the woodwork, whirling axe blades pop out of the walls, and rickety bridges threaten to collapse. Plus it comes from the company that produced Summoner Wars, and that is one of my favorite games of all time. It is practically guaranteed to rule.

But then it doesn't rule. It is a randomized, dice-throwing extravaganza where strategy takes a back seat to just being lucky. I wouldn't go so far as to say it sucked, but I don't much want to play it again. There are some really cool ideas at work here, but they seem to be surrounded by things that just drag it down.

For instance, there's a seriously cool fighting mechanic where the monsters roll for hits, and then the hero rolls to attack, but some of his dice can block the damage, or he can go for broke and just berserk the ugly bastards and suck up a little pain. This is probably the best part of the game, and while it does get very dice-heavy, I really did like the way it worked.

The problem is, you only get two actions on your turn, and so if you roll fair-to-middlin', you'll maybe wound the monster once and block all the damage - and then your turn is over and the big sumbitch is still there. Then you get to wait until you get a turn again, and then you get to say, 'OK, roll', followed by, 'OK, roll,' and then your turn is over again. There are ways around this - you could run away, you could get all berserk, or you could hope someone else kills the beastie - but that doesn't mitigate the fact that there's a very dull and repetitive way to play the game, which might actually be the best strategy you could employ.

Then there are little things that pop up here and there. The deck of encounter cards has a ridiculously high number of traps, and not enough monsters, so you're far too likely to wander through room after room finding not one actual opponent, and a nearly endless supply of poison arrows and spears shooting out of the walls. I don't mind a trap now and then, but I would really much rather fight. I'm a violent dude, especially when I'm gaming, and my brand of excitement does not include continuously dodging clouds of poison gas (if I want poison gas, I've got plenty of gaming buddies who eat far too much fast food).

For another example of something I didn't like, look at the evil wizard (he's called the Filth). He's a bad-ass magic-slinger, and he can bust a cap in a cave mole or walking fungus like a West-Coast rapper. But when he gets to the final bad guy, if he finds himself fighting the dragon, he's up a smelly creek without a paddle, because that fire-breathing thunder lizard is immune to magic. Sorry, Filth, you're screwed!

Now, in all fairness, simply killing the dungeon boss is not how you win Dungeon Run. Once you kill the boss, you have to grab up the stone MacGuffin and make it out the door while all your friends come after you with howitzers and safety razors. If one of them can kill you, he can make a run for freedom, and everyone gets to kill him instead. This actually sort of works - you'll spend the first part of the game trying to get everyone else worn down to a nub, and the end game trying to finish them off.

Unfortunately, the rules for fighting your friends are not the same as the rules for fighting monsters. The rules work great for killing gross booger monsters, but they're clunky if you're fighting other heroes. And escaping a dungeon denizen takes more work, too - the best strategy for most Hero Turned Ultimate Dungeon Boss types is to just run away.

And then comes my biggest complaint with Dungeon Run - it's just not intuitive. Over and over we found ourselves going back to the rulebook and going, 'well Hell's Bells, how the crap does this work?' The rulebook is quite long, and while I'm not afraid of a rulebook, this one is really wordy. And you need all those words, because you're not just going to guess at how it works. It's not like you're going to pick up the basic premise of the game and then see everything else spin off from there.

I'm actually really glad that Dungeon Run is not the first game Plaid Hat has produced, because Summoner Wars put the company on the map in a big way and continues to keep it there. Dungeon Run is a pretty mediocre game leaning more towards bad than awesome, and there's no way Plaid Hat would have made as enormous a splash if they had entered the market with Dungeon Run.

Now, my negative reviews basically come in two flavors. The first flavor is the one where I tell you that the game in question was planted by dread Cthulhu to torment the minds of mortals, and nobody who values their sanity should ever consider playing. The second kind of negative review, which is the kind we've got here, is the one where I didn't like the game, but I can certainly see where someone would. In fact, I've heard a great deal of pretty good buzz about Dungeon Run, so I know that someone out there is enjoying the hell out of it. I'm not, but someone is, so maybe you'll throw me a bone here and buy the game just so Colby will still bring bottles of Crown Royal to my hotel room when we're in Indianapolis again.

Cons:
Too many rules, and some rules seem to be at odds with others
Too easy to get mired in repetitive, boring roll-fests
There's no strategy you can use that can't be undone by a few bad die rolls

I know that a lot of people are really digging Dungeon Run, and there's every chance you will, too. If you want to give it a shot, you can save a sawbuck on it and pick it up from Noble Knight Games:
STAB THE GOBLIN BEFORE HE STABS YOU
Posted by Matt Drake at 8:48 PM

Your cred just went way up in my book. Thanks for the honest review.

This review made me a little sad, at least I'll always have the SW Master Set.

Thanks for the honest review, Mr. Drake.

Your honesty is appreciated. SW: Master Set is still what made me fall in love with Colby.

Thanks for your honesty towards a game made by your friends. I was wondering if the game was worth a buy but now I will hold off and see if I can play it somewhere first to see if I like it

/me throws a bone

SW strategy is: to know your deck and your opponents deck, and to have a plan how to rid of him. The key element is: where you place and where you move your units.
Many people love this. SW is a simulation about controlling a fantasy army in a battle.

DR is in SW universe too, but the game is something else. You also need to know your abilities and your opponents abilities, and have a plan how to win the game. But there are many random rooms and encounters. You and your opponents may find treasures and may gain new abilities. The game changes randomly and you must figure out when to back-stab your ally, and what position you must keep to win or what positions are dangerous to let your opponents to take. You must know all of them before the endgame hits. And the key element is to semi-cooperatively manipulate the others before the endgame. But you never know exactly when it comes... DR is a simulation about selfish politicians in a (fantasy) party that is falling apart. Who can escape whit the most money when the country falls? Some people like this simulation. But I live in such a country...