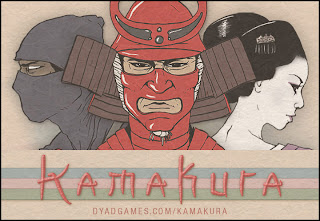 Gamers as a group tend to be biased against really small games. I have a few theories about this. See if any of these make sense:

1. You don't want a tiny game because you will lose it behind all the big box games you've got stored on bookshelves lining your basement walls.

2. You don't buy the tiny game because when you get to the store, you're dazzled by all the enormous boxes covered in sexy art drawn by people with more talent than is easily explained.

3. The value you place on a game is directly proportional to the cubic feet the box consumes.

Personally, I think it's option four. There are some really strange phobias out there.

I mention this bias because if you skip over games on account of them being too damned small, you'll totally miss out on Kamakura. And that would be a shame. It's not often you get a lovably violent game with tasteful art and clever rules, all packed into a tuck box you could conceal in your underwear. Why you would feel a need to hide the game in your drawers is none of my business. My point is, you could.

And it's deceptively simple. On the surface, Kamakura looks like a fighting game, where you send your soldiers out to grab up territories in feudal Japan, and then ninja assassins strike down on them with great vengeance and furious anger, and then there's blood. But it's not really that. I mean, that's in there, but until you play, you won't see that there's a heck of a lot more to do in Kamakura than send brave men and women to their untimely deaths.

The game is really straightforward. Each player has four territory cards face-down in front of him, valued from one to four. On your turn, you lay down a soldier and a weapon on an enemy territory, with a strength determined by the weapon in question. If you've got a play, you have to make it, even if you're virtually guaranteed to get your ass kicked. Then the other guy looks through the cards in his hand, picks a soldier and a weapon, and tries to defend his homeland. That, or he just gives up and you take the land.

It gets interesting, though, because there are three different soldiers. The samurai is a bad-ass who makes every weapon hit harder. The ninja can use a holdout blade on the attack and turn a loss into a full-on carjacking win. And the most interesting soldier, the geisha, can persuade the attacker to go back and steal land from the aggressive jackass who sent him over in the first place. So when you're picking your cards for your turn, you have a lot more to consider than just picking the strongest combo and going in heavy. You don't want your geisha on offense, if you can help it, but then, if you think your opponent is coming in hot next turn, you'll want the samurai who can bust him one to stay in your hand. You might send the ninja and hope to use the hidden blade, but if the other guy just pulled a fresh hand of cards, he might have a sneaky knife, too, and then your ninja is going to wind up wearing that knife for a monocle.

To really complicate matters, you only get to draw cards when you can't play. That generally only happens after your hand is almost empty, and it means you want to hold on to some really good defensive cards just in case you get jumped when your hand is empty. It also means you may want to choose a losing combo, just for the chance to use a couple extra cards and run out sooner. It also means you have to time your plays just right - you don't want to be empty when the next player runs out, but you don't want to leave yourself open right after everyone draws new hands.

Kamakura is a very clever game that combines two of my favorite things - violence and tough decisions. I mean, in games. In real life, I like easy decisions. And between my bad back and my creaky knees, anything more violent than painting the cabinets would put me in traction. But in games, tough decisions are more fun, and the violence all happens to fake people, so it's OK.

Pros:
Excellent art that shows admirable restraint
Easy to learn
Lots of subtlety and tricky decisions
Plays lightning fast and leaves you knowing you did something fun

Cons:
Really small (only a con if your a size-ist)

I can't figure out how you could go about buying a copy of Kamakura. Maybe if you cruise around the Dyad Games website, you can find a hint:
http://dyadgames.com/
Posted by Matt Drake at 5:02 PM

Kickstarter for Kamakura has been over for months it seems.. If anyone knows how to purchase it, I'd be interested..

Hi Matt - Another reviewer (http://thecardgamer.com/2011/10/kamakura-review/) made the following observation and I am hoping to hear your thoughts:

"Unfortunately there are a few glaring issues that can really ruin the experience. Let me give you an example.

You start by dealing eight cards to each player.

Player 2 has no Walls in hand.

Player 1 plays all 2 Barrages on turn one and captures Player 2’s Palace and Fortress getting a territory value of 17.

This happens far too frequently and it is a real bummer that can sour someone’s view of card games."

You can email them at contact@dyadgames.com and ask for the game.

It costs 7USD for the deck plus shipping. I ordered one for Europe and the costs were 5USD i.e.12USD total.

There are 4 barrages in the deck and 4 walls. The odds of the described scenario are pretty slim. One guy has to draw 2 barrages. The other has to draw no walls. Individually, the odds are not spectacular of seeing this happen, and together, they are even lower. Add in the fact that the player with the barrages has to exactly guess both the fortress and palace, and the odds drop even further.

So I suppose that is a technically possible outcome, but it would seem to me that it's pretty darn rare. And since the game only lasts 10-15 minutes in the first place, it seems to me that in the exceptionally rare case that you see this quick game-ender, you could just shuffle and play again.