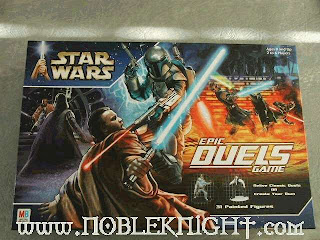 Here's a quick anecdote to illustrate what a smart son of a bitch I am.

Several years ago, I was walking through the toy section of my local Target store and noticed a couple Star Wars games. These had pictures on the front featuring miniatures that were painted by aboriginal chipmunks, and a bunch of art cribbed off of movie stills. I was momentarily intrigued, but then I remembered that when I was a child, I had a game based on Captain Caveman, and it sucked. So I turned up my nose, insisting that I would only buy games I could find at hobby stores, because mass market games were clearly only for idiot children.

So yeah, I passed on Epic Duels and Queen's Gambit. I also missed out on Buffy, but in my defense, I was really broke when that came out and couldn't have bought a copy anyway.

I then spent years kicking myself for being an elitist asshole. But it was only in the last few weeks that I was able to redeem myself in some small way, by buying a copy of Epic Duels off an auction site.

To rub my nose in what a total douche I was for not buying Epic Duels the first time I had a chance (and paying like 20 bucks for it, instead of the small fortune it ended up costing me), the game had to go ahead and just plain rock my face off. Man, was I a tool. It's entirely possible that I still am, but at least now I will buy a game at Target. I've learned my lesson - Epic Duels clearly shows us that you can buy really fun mass market games, even if they are based on popular franchises.

I should have known right when I saw it that I wanted to buy Epic Duels. It's not based on Captain Caveman, it's based on Star Wars, and I love Star Wars (although in my defense, when I was a kid, I also loved Captain Caveman. The sidekick chicks in their skimpy bikinis made my prepubescent pants confused). You pick teams to fight each other, like Boba Fett and Greedo against Han Solo and Chewbacca, and then they battle to the death. In terms of a theme, you can't do much better. And to really mix it up, you can do Mace Windu and a couple clone troopers against Darth Vader and some stormtroopers, or Anakin and Padme against nobody at all, because no self-respecting Star Wars fan would willingly play the two lamest main characters in the entire Star Wars universe.

On the surface, Epic Duels doesn't look all that deep. You roll a die, which tells you who can move, and then you play cards to attack. If you're shooting guns, you don't even have to worry about range, because any gun in Star Wars will at least shoot across a room.

But it's not that easy! For one thing, you can only attack in a straight line, which means even if you've got the range, you need to position yourself for a shot. And if you do line up a shot, you're leaving yourself open for a counterattack, so it might be a good idea to send your lackeys out front, so they can get killed instead of losing Luke Skywalker to a two-bit battle droid.

The cards also provide a fantastic layer of tactical play. You get two actions every turn, and each action can be to play a card, heal your main guy, or draw a card. Since you can't attack or defend if you don't have cards, you'll need to time your big moves so that you don't wind up with Yoda standing right in front of Darth Maul with his pants around his stubby green ankles. Not only that, but you'll want to watch your opponent's hand and rush in when he's low on cards, while still leaving yourself enough defense cards to avoid losing your hero just because you couldn't throw up a force shield.

On a completely different level, every set of characters plays differently. Darth Vader's lackeys are just a couple of cannon-fodder stormtroopers, but the big man himself is a total bad-ass who will absolutely throw heavy boxes at you from across the room. Han Solo is nowhere near as impressive, but Chewbacca is no slouch, and between the two of them, they can give Emperor Palpatine a run for his money.

I could go on about how well the special abilities on the cards bring the characters to life, or how you can sacrifice your minions to save your main guy, but all of that discussion is academic compared to the most important thing about Epic Duels - it's really, really fun. When Han Solo blasts a hole right through Greedo's face, you'll stand up, all cocky and full of swagger, and say, 'boring conversation anyway' (I know, that was on the Death Star. Still a great line). When Vader force-chokes a clone trooper into an early grave, you'll throw your voice really deep and say, 'I find your lack of faith disturbing.' And when Chewbacca throws a battle droid out an airlock, smashing it into a dozen pieces, you'll stand up on your chair and let out a wookie roar that will make your wife yell at you to keep it down, she's trying to watch Real Housewives.

I've started on my penance for not buying Epic Duels. My first step is to visit big-box stores and look for fun games. Right now I'm trying to decide between a Harry Potter retread of Candyland and something with My Little Pony. I'll probably just settle on some Cars 2 licensed pap designed to appeal to small children so that their parents buy the game just to shut them up.

For the second part of my penance, I'm going to play Epic Duels again. Sure, that's like telling an alcoholic that he has to drink a fifth of whiskey to make up for being a drunk, but I'm comfortable with it.

Cons:
Pretty darn expensive now, thanks to being both out of print and awesome

I would tell you that it would be hard to find a copy of Epic Duels, but Noble Knight Games specializes in old games that are out of print. They've got a copy, right here:
LET THE WOOKIE WIN
Posted by Matt Drake at 5:10 PM

I'm still in deep pain at having passed on Queens Gambit...want it so bad...did score on epic duels for cheap though, even have two sets. ED is an awesome game, Thnx for reviewing. Too bad the reprint fell through..

Great writing, fun to read! Have been drooling over that one to. But I never missed it the first time though, never knew it existed then. Queens Gambit look awesome to. But I havent got the cash to buy them now, cant defend that. Just have to be satisfied with The Battle for Naboo... and my awesome Star Wars Miniatures game of course.

This game is best played on Halo: The Boardgame terrain. It was good before, but when you make it into a dyed-in-the-wool miniatures game, it becomes the stuff of legend.

Anyone who HASN'T played this...is missing out.

I think it's also worth noting that this 10 year-old game also still has a core of people devoted to making custom characters. IE. www.epicduels.weebly.com