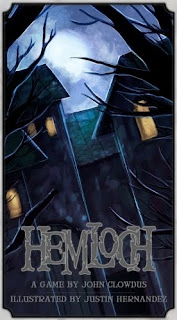 Odd characters in a wacky world battling for control of a decade of sunlight makes for a pretty bizarre backdrop for a game, but it sure is imaginative. John Clowdus has pushed the envelope on interesting settings with Hemloch, a game about - well, it's about that odd-characters-in-a-wacky-world thing. It's basically a card-based worker-placement game, but instead of workers you have rotten bastards who manipulate the city's denizens while all the commoners are just trying to get drunk in peace.

To expand on the background, each player in this two-man game runs a family of malcontents and creepy people. Gravediggers and owls with face tattoos are only the opening act. These nefarious do-badders have shared control of the city of Hemloch for the decade of night, but now the night is coming to an end. And when the sun comes up, there just won't be room in this town for two ruling families. Especially two ruling families who employ evil hags with noses the size of lawnmower blades.

At first glance, it doesn't seem like there's much to do in Hemloch. There's a party every night, but your warty minions aren't invited, so they have to wander around the rest of the town. You get two actions on your turn, and your possible actions are 'play a card' or 'draw a card.' That's not much, right? Except that John Clowdus also realized that would make a boring game, so he added a whole bunch of stuff to mix it up. Then he put it on the cards.

Say you're staring at a hand with Hootie the Diseased Owl and one of those big-nosed crones. You're going to need more cards, but if you draw, you'll hardly have anything to do. So first you play the old hag, and pick up a potion. Then you play the molting freak of a bird, and his ability lets you draw two cards, because when your unsettlingly bizarre minions see owls with crap on their faces, they come crawling out of the woodwork. But now your turn is over, right? No! You can use the potion to get one more action, and then play the busted-ass C3PO robot, who will pretend he's an owl and let you draw two more cards! You must be a genius.

The end goal behind all this card play is to exert control over the locations in town. At the end of the week, you'll see who has done the best job of influencing the locals (or, if you're playing enough of the scarred assassins, who has done the best job of killing off everyone on the other team). If you've played right, you'll seize control of the city and rule unopposed until the sun goes down - in, like, ten years. If you played wrong, your opponent will break out the tarp and shovel so he can hide your body. Metaphorically, you understand.

As a game designer, Clowdus just keeps getting better. Hemloch is one of his best games to date. It's easy to understand, once you get the hang of it, and more intuitively straightforward than 90% of the stuff he's done so far. And as a publisher, he's finally starting to understand that people like to play games that look good. The art in Hemloch is as good as anything you'll see from Fantasy Flight Games, and it really helps build the atmosphere of twisted dark forces battling in the shadows.

Hemloch is quick, fun, and smart. There are tough decisions to make at every turn, and a great combination of strategic planning and smart card play. The art is absolutely fantastic, the theme is darkly hilarious, and the cards are just plain dead sexy. If you're looking for a two-player game you can enjoy with someone smart, you can quit looking. You want Hemloch.

Pros:
Absolutely fantastic illustrations
Smart and fast
Leaves you wishing you had just one more turn

Cons:
Might be a little too Euro for fans of bloody games

You can order Hemloch right now, but you need to haul ass. Small Box Games doesn't do big print runs, and when the games are gone, they're gone. Get over there and do it now:
http://www.smallboxgames.com/hemloch.html
Posted by Matt Drake at 7:30 PM

Hi Drake, is it more leaned towards RFTG or Warhammer, feeling wise? My GF absolutely refuses Warhammer, so I dont think I should get OMEN. What about Hemloch?

How much hurting each other is there in Omen and Hemloch? I presume that in the aspect of destruction (Warhammer Invasion) Omen is like that. Screwage all over the place. Am I right? What about Hemloch?