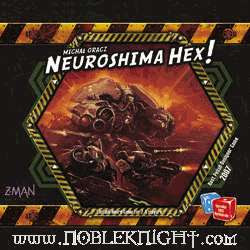 Experts will tell you that a nuclear war will result in the near-complete decimation of the human race, with survivors slowing starving and dying of radiation sickness. But those of us who know better have a different scenario in mind. Namely, people will mutate into totally kick-ass monsters, probably with green skin, and have giant battles against evil robots in dune buggies. At least, that outcome would be a lot more interesting, and maybe even make it worth having a nuclear war just to see the sentient plants.

And if you play Neuroshima, the RPG about life after the end of the world as we know it, you can see all that stuff. You can fight mutants and robots and evil plants, and scavenge for supplies, and blow up monsters with plasma guns.

But if you play Neuroshima Hex, you won't do any of that stuff at all. You'll just put out hexes with arrows and symbols on them and try to point the right direction so you can win. It's almost a shame to see an exciting post-nuke fantasy turned into a game this abstract - or it would be, if the abstract game in question were not blatantly awesome.

There are rules in the book for playing with three or four, but the game was really designed to play head-to-head. You take turns putting out your soldiers, who do stuff like shoot or stab or throw nets. Then a battle breaks out, and you figure out who is smart and who is dead. The overall goal is to damage your opponent's base, but this can be a lot harder to do than you might imagine, especially if you're playing somebody who knows what they're doing.

When you place your fighters, you'll have the best intentions. You'll have a straight shot on the path from your sniper to the enemy base, but then the other guy will put a really fast stabby guy right behind your sniper, and since your sniper is slow, he'll die before he ever gets to shoot. But you've still got a chance, because if you can throw a net on that mutant bug with the finger claws before he cuts your assassin into tiny cheese cubes, you can bust out that killer shot and put a hole right where you need it. Of course, right after you do that, your opponent will throw a grenade at your netter and you're back to square one.

Before you're ever really happy with the layout of your fighters, one of you will end up playing a hex with an explosion on it, and then all that maneuvering is resolved. You'll start with the fast guys and start killing things, and if you planned well (and didn't get totally hosed somewhere along the way), you'll be able to do more damage to the other base than he can do to you. Once you run out of hexes, you get one more big melee, and then whichever player has a healthier base wins the game.

If you just look at the description of Neuroshima Hex, it might seem like a kind of fighting game or simulation of a battle. But it's really not. It's more like hexagonal chess. Every move has a counter move, but some moves are devastating while some are lame. The theme is there, and makes itself felt through the special abilities of the hexes you place, but this really doesn't feel like a fighting game. If you want a simulation, there are tons of games you can play, but this won't be one of them.

On the other hand, if you want a very smart, painfully vindictive game with abstract rules, Neuroshima Hex is brilliant. As the game progresses, you'll find yourself reenacting chains of actions in your head. Your internal dialog will sound something like this:

"So I'll play this guy here, and he'll make that guy fast enough to kill that dude, which will keep this guy alive to snipe at the net guy, but the net guy is holding a fast guy who won’t get to go, so then this original guy will be killed before he ever existed, which will result in a time paradox that will destroy the universe and bring us face-to-face with Gene Roddenberry."

In other words, there's a lot of thinking in Neuroshima Hex. You're not running and gunning and grabbing cover, you're placing and blocking and planning and analyzing. And then for good measure, you're analyzing a little more. This is not a game for people who want to recreate epic battles. It is, however, a game for people who like highly-abstracted games that make your brain sweat, and that still have bodies piling up all over the place.

So you won’t get to reenact nuclear frostbite if you play Neuroshima Hex, but you will get to exploit special abilities, plan five steps ahead, consider far-reaching ramifications and be totally mud-stomped when your opponent plays something you hadn’t considered. And that makes it good in my book.

Pros:
Super-cool setting with groovy art
Lots of planning and thinking
Challenging and smart
Four different factions to play, and they all play different

Neuroshima Hex is an older game, and it can be tough to track down a copy - unless you shop at Noble Knight Games:
MOLOCH AWAITS
Posted by Matt Drake at 7:52 PM

I find this game a little too random, in two player, especially. A good pickup by a player early in the game makes for a one sided fight. It seems to happen to us probably one game in two. With more players it cancels out a little, but if you're usually going to play 2 player, I think that there are better options out there.

This is fairly addictive on ipad or iphone. I can waste hours of time. The AI actually doesn't suck.

If you have the chance to play with 3+ players I heartily recommend it. Admittedly everything you know about playing 2 player is now worthless but sometimes having the board clear itself every few turns is more fun than letting Outpost run train with super shooty jerks that just won't sit still. I also think the Babel 13 expansion armies are better than Duel, by a very small margin mind you. If you're still playing a month from now, try Babel 13 next.

Been playing this one for awhile. I think it is one of the more unique games I have. I admit that I bought it on theme and publisher description alone, I have not been disappointed! The theme and setting led me to purchase the sister game 51st State, which I think is a great game as well, although the rules could stand a major overhaul. If you get a chance Matt, look at 51st State, your take on that game would be interesting.

Sue G is right. This game is awesome on Ipad. The computer does all the work so we don't have to quibble about which counter gets to go first, etc. Very fun without the fiddly calculations. This is one time where I have no interest in playing the board game version.

I just really wish they would finish the Android version.

Hi Matt, This is a great review, which I've linked to on my own blog

as a part of a cunning plan to get more armies for the Android version and an app to do the accounting for the boardgame.