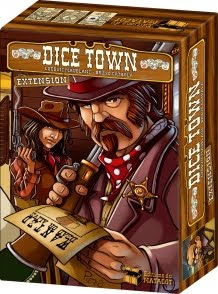 Dice Town has been a favorite around my house for a while now. Something about rolling dice, playing poker, and hosing your friends makes this a great game to break out when everyone just wants to goof off for an hour or so. It's two parts cutthroat, three parts luck, and fourteen parts using the ol' noggin. The game itself is not in whatever top-ten game list I might have, but I've probably played it more than 90% of the games I own now.

And now there's an expansion. I think every game has to have an expansion, sooner or later, or people will forget to play it (not really. That's stupid). While considerable effort was put into coming up with clever new rules and fun new things to add to the game, it is obvious that they really were not trying on the name, because after lengthy market research and a consultation with a panel of industry experts, they decided the best name for the Dice Town expansion would be Dice Town Expansion.

The basic idea of Dice Town is that you roll poker dice, and then go down the line and grant various rewards to the players who roll the best in each possible hand. So the most nines gets you gold rocks, the most tens gets you cash, the most queens let you steal, and the best overall hand gets some land. The expansion expands on that idea (which explains the rather obvious name) by giving two possible actions to each location on the board, and then allowing second place to take the leftovers after first place takes his pick. This has considerable ramifications on the game.

For instance, the player with the most nines can now pick to grab a gold rock for every nine he rolled, or he can draw a card and maybe do better. If you only rolled one nine, you probably want a card, but if you have five, you're almost certainly better off just taking the rocks and letting the guy with the second-most nines try his luck panning in the river (and thus drawing a river card, which might give him anything from a huge pile of nuggets to very wet socks).

This continues down the line. The most tens will let you rob the bank and take the pile of cash left by players from previous turns, while second place lets you rob the stagecoach and take a dollar for every ten you rolled. Jacks let you draw general store cards as before, or you can decide to take a Doc Badluck's action, like you used to do in the original game when you rolled like crap and everybody beat you. Queens still let you steal, but you can also recruit outlaws that let you manipulate your rolls. Kings make you the sheriff, or they let you hunt outlaws after they're used by other players, and these can be worth more points at the end of the game. And the best hand lets you grab land cards, while second best hand lets you draw one at random.

With this many options, we have not seen anyone go a whole turn and not get some kind of prize. And that means nobody ever has the Doc Badluck action because their hand sucked. What happens instead is that players who really want to protect a card or steal some money from everyone else will try to win at Jacks, because then you can take Doc Badluck's action without actually having bad luck. Which makes him a rather poorly named doctor.

The additional actions also make the game longer. I didn't personally have a problem with that, but it could affect how often Dice Town hits my table in the future. The expansion adds more dice, so now you can play with six, but this has always been an entertaining way to kill half an hour while something else was finishing up. I love the game, but the longer play time will limit how often we break it out, especially because now that I've played with the expansion, I wouldn't even consider going back.

There's also a lot more thinking going on now. Before, you started your turn and said, 'what do I want?' and tried to get the best dice for your goal that turn. You were single-minded, because second place was as good as last. But now that you can win second place, you could score something at nearly every location, even if you have a horrible hand of dice. An aggressive (read: greedy) player could try to win multiple locations every turn, settling for smaller rewards in favor of more of them. It's a tricky way to play, and it makes you work a lot harder - but it can also make you the winner, so it's worth a shot.

Another cool thing about the expansion is that it includes the 2009 expansion The Indians. The Indian die is in there, along with the smoke signal cards, and you can give your land back to the natives in order to win their support next turn. That can be a real game-changer, and it's nice that you don't have to track down that obscure mini-expansion, because there it is, in the aptly titled Dice Town Expansion.

I've already emptied the smaller expansion box into the main Dice Town box, and so it goes without saying that I won't be getting rid of it. Dice Town is a really fun game that has seen a ton of play at my house, and the expansion takes it from a basic-but-interesting beer-and-pretzels game to a real mind-bending contender. It's not the light dice game it used to be, but with the expansion, Dice Town is a lot better.

Pros:
Adds layers of strategy and careful play
Lots more to do means you're less likely to feel completely screwed
Diverse actions make it less likely that one person will dominate a single location the whole game
Makes a fun game even more fun

Cons:
Turns a light-but-clever game into a full-blown brain squeezer
Makes for a longer game
(Neither of these are cons unless you want them to be)

It seems Asmodee has once again sent me games you can't get yet. I really need to start checking on that before I write the entire review and find out I can't send you anywhere to buy it.
Posted by Matt Drake at 2:41 PM

Eh... Matt - from the pic on the box it looks like this is called the Dice Town Extension...

I haven't played Dicetown, but you make it sound fun!

Hmmm, that's exactly what we wanted!
Nice review! Thanks, Matt! =)

Well, that's how much fun it is - you'll be so excited to play, you won't read the box cover.