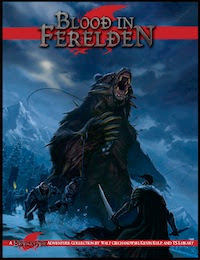 You can tell a lot about a roleplaying game by reading through its premade adventures. Lots of games don't have published adventures at all, and those games are most likely created by lazy people. Honestly, if you can't think of a story to tell in a world you made yourself, you're either boring or you're just not trying very hard.

Other games have adventures that are about as interesting as a plateful of sawdust and mattress stuffing. Those writers are at least not lazy, but they are frightfully dull. Their games probably also suck.

In my experience, however, the best games have plenty of published adventures available, enough to hold you for months of serious gaming. Deadlands (my favorite RPG) is a great example - if you don't ever want to write your own stuff, you don't have to, unless you play the same game with the same people for three years.

Another example of a company serious about producing a high-quality game is Green Ronin, the publishers of the Dragon Age RPG. This game is ridiculously easy to run, full of great atmospheric potential, and more to the point I'm making right now, has some of the best prescripted adventures I've ever seen. There's one adventure in the base game, another in the GM's kit, and a seriously impressive pile of them in the adventure book Blood in Ferelden.

Blood in Ferelden contains three full-length adventures with a shocking amount of depth and detail, plus there are three really excellent adventure seeds tacked on as an appendix. Assuming your characters make a level at the end of every adventure, and given that the Dragon Age game currently only goes through level five, you could play an entire campaign and never have to write your own material. That's a pretty serious load off a GM.

The first adventure, Amber Rage, has the heroes tromping around the wilderness, trying to find a cure that will head off a zombie apocalypse. This is not a bad adventure, all things considered, but the writer has a pretty heavy hand. You can almost see him cackling to himself as he writes another moral conundrum and saying, 'Ha! Gotcha! Bet you feel bad now!' I like the overall story that plays out, but it seems every time the heroes wander into the woods to take a piss, they're having to choose between saving their families or exterminating a race of lovable magical bunnies. It gets old, and a good GM is going to have to weed through the blunt-force morality lessons to make the adventure enjoyable.

Where Eagles Lair is the second adventure, and it is a whole hell of a lot better than the first one. For one thing, it avoids the obvious 'this or that' morality choices and plays on racial stereotypes and preconceptions. This adventure shows a lot more intellectual complexity, and provides plenty of options so that nobody has to feel like they're being railroaded. A good gamemaster is going to have a ball with this one, and the players are going to have a great time, too. It's still dark, with all the subtlety and depth the creators of the game were trying to accomplish. Where Eagles Lair gets a big fat thumbs-up from me.

The final adventure is the piece de resistance, the cream layer on top of the fruit-on-bottom yogurt cup. It's called A Fragile Web, and while the GM will have to read the whole thing four times to understand all the different angles and potential pitfalls, this is how really good RPGs are supposed to play. In fact, if I were doing it all over again, I would play the intro to this adventure first, then tie it into the entire campaign, periodically dropping little hints and elements here and there and giving the whole thing a fantastic big finish. It would be like wrapping up a season of really great television, except that you don't have to wait six months to find out what happens next unless your GM has open-heart surgery. I can't remember a time when I read through a published adventure that was this good.

If you need a little more material and don't mind doing some legwork, the three adventure seeds at the back of the book are remarkably robust and full of potential. Granted, they don't hit every detail, but they're quite original and show just how much fun you can have with a fantasy RPG when you're not just roaming from room to room, killing everyone you find, then stealing their crap.

It's remarkably refreshing to find a roleplaying game that combines an easy-to-play system with a deep and interesting setting. Granted, Green Ronin didn't create the background world for the Dragon Age RPG - that was BioWare, for their video game. But they took the world BioWare created and built it into one of the most enjoyable, challenging, and interesting fantasy roleplaying games I've ever played. It's amazing to me that a game this fun was originally a video game. That's almost always going to be a recipe for disaster, but with Blood in Ferelden, Green Ronin proves that they've got mad chops (that's what all the kids are saying. Or they were at one point. I think).

If you're considering the Dragon Age RPG, you should get all three Dragon Age RPG products at once. I know that's kind of a big chunk to bite off, but all three pieces go together seamlessly, and your game will be better and more cohesive if you have them all right from the start. This is one heck of a fun game, and these are some really great adventures. As an added bonus, you won't have to sit through another evening of home invasion disguised as roleplaying.

Pros:
Three very good adventures that can be tied into an overall campaign
Brilliant writing (mostly) full of complex decisions and subtle depth
Enough material to hold you for weeks
The third adventure is absolute solid gold

Cons:
The first adventure is overblown with moral quagmires
The second writer is really fond of flowery language, which gets old pretty fast

If you're going to buy Blood in Ferelden - and if you're playing the Dragon Age RPG, you should - do me a big favor and get it from Noble Knight Games:
GET BLOOD ALL OVER YOUR FERELDEN
Posted by Matt Drake at 2:54 PM

Great review Matt! Love to hear your enthusiasm about the book.

I've been thinking about picking up the Dragon Age RPG for a while but have resisted so far. Reading this has pushed me over the edge however. I've always been a sucker for a well written adventure!

Thanks for the review. I just bought the boxed set and I was wondering if the adventures would be good. I've been pleasantly surprised by this system as a whole- great Old School simplicity married to excellent layout and design.

Yep, Dragon Age is one of the best RPGs I've played in a long time. It's so easy to run, and completely escapes the dungeon crawl without losing the excitement, tension and action. Great game.

"In my experience, however, the best games have plenty of published adventures available, enough to hold you for months of serious gaming."

Even now, April 2012, there are only seven (7) official adventures in total for the game.