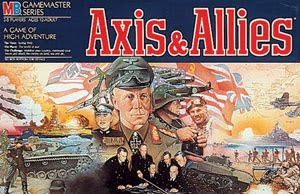 I miss the 80s. The clothes were cool - when even chicks wear ties, people just tend to be dressing better. The music was great - kick-ass metal, great Europop, U2, and The Alarm were ruling the airwaves, and it was good. And we expected our games to take a while to finish.

Now we complain about games that take longer than an hour (well, some people do. Not me. But some people). I know of entire game groups who won't touch anything they can't finish in 45 minutes, because they're in a hurry to get to the next game. I guess if I was constantly trying to shuffle through some colossal pile of throw-away games, I could empathize, but many of my favorite games are marathons.

Take Axis & Allies. This is one of those Gamemaster Series game from the early 80s. It's a huge game, with a box that rivals those huge Fantasy Flight games that come with eight pounds of plastic and at least three oak trees worth of cardboard. Even if you didn't already know what it was, you could probably guess from the name that Axis & Allies is a World War II game. And like many of my favorite games, it takes a very long time to finish.

Ideally, you should play Axis & Allies with five people. There are Germans and Japanese - those are the Axis, in case you failed fourth grade. On the other side, you have Soviets, Brits and the US of A. Each of these nations is played by a different person, unless you have less than five people, and then someone has to double up. Every nation has a big fat bag full of plastic dudes and tanks and planes and ships, and you'll put so many guys on the map that you have to put miniature poker chips underneath them to remember how many are there.

Axis & Allies is the ultimate dudes-on-a-map game. You'll invade Ukraine from Western Europe while your ally fights naval battles in Guadalcanal and bombs the piss out of Tokyo. You'll invade Normandy across the English Channel. You'll rampage across Northern Africa until the Limeys get sick of your Nazi ass and kick you back out. Basically, you'll fight across the entire globe, with ships and planes and tanks and most of all poor soldiers who will die by the truckload, and you'll either free the world from the tyranny of the fascists or you'll rule with an iron fist. Or, you know, lose.

Along the way, decisions will come at you like freeway traffic at rush hour. You'll have to decide whether you need another tank, or if you want to try to research some new technology, like rockets or jet planes. You'll have to choose between reinforcing beleaguered armies or mounting a counter-offensive in a flanking attack. Bomb or attack? Tank or infantry? Battleship or carrier? Island hop or go for the jugular? And while no single decision is going to outright destroy you, a couple wrong moves will leave you hoping you're lucky, because if your brains fail you, you better hope the dice can save you.

Also like most of my favorite games, there are lots of dice in Axis & Allies. Since you get to roll one die for each unit you have in a fight, you could wind up chucking a pile of dice the size of Hitler's ego. And then you'll throw all those dice, and when you score one hit on ten dice, your jaw will hit the floor and your pants will fill up with ice water (the ice water is because after you miss that much, you'll flail around and spill your drink in your lap. What did you think I meant? Don't be gross).

One thing is important to know about Axis & Allies - it is a very long game. I know I already said that, but it's worth mentioning twice. If you can't parcel out a whole evening for one game, maybe because you have some biological drive to hop from game to game like a rhesus monkey hopped up on Red Bull and diet pills, then don't bother even looking at this one. You'll never finish a game before someone leaves the table and starts playing pinball (seriously. That happened to me once. Not with this game, but it did happen. In his defense, he was drunk).

A long game might be a drawback to some people, but for others (including people like me), a long game is the best way to get everything you want from a board game. You get to exercise long-term strategies and think five turns ahead, and still make split-second decisions that have long-reaching consequences. You get to see a big-picture story develop over the course of the whole game, leaving you with the kind of game you're still remembering aloud three weeks later. And most of all, a long game means you get to spend a good long time with your friends without feeling some overwhelming pressure to maintain a forced dialog because nobody can think of anything to say, except that one ass-hat your buddy brought over who can't stop talking about his great job and his expensive car and his trophy girlfriend until you want to super-glue a bathroom plunger over his flapping cakehole.

Now, I'll be the first to admit that a long game can be a serious drawback if the game feels long. You know what I mean - those games where you turn around after someone finally wins and look at the clock on the wall, and at the same time, everyone goes, 'Woah! It's only been an hour?' Those kinds of long games suck, because even if you are enjoying the social experience, you still have to actually play the game if you want to finish.

But Axis & Allies doesn't feel like a long game. In fact, after we hit the four hour mark, someone said, 'Holy crap! Is it already that late!?' We had no idea we had been playing more than a couple hours, because we were having so much fun. Everyone agreed afterward that Axis & Allies was a great game, and the time just got away from us because we were so involved.

If you're a fan of short-attention-span games, or if you just want to try every new themeless diversion that ever pops out of a German game designer's head, you're going to hate Axis & Allies. Worse yet, you'll never finish it. If you don't have lots of time on your hands, there's no reason to bother.

But if you do have the kind of schedule that lets you carve out an entire night for one game, and if you like games that actually feel like you're doing more than just rearranging cardboard tiles, you'll love it. The strategy and tactical maneuvering, the difficult decisions and the whims of fate, all add up to make Axis & Allies the hallmark for world domination games, the yardstick by which other games measure their privates and compare them behind the lockers.

Pros:
Tactics and strategy
Far-reaching consequences to nearly any action
Tough decisions and painful mistakes
Plenty of dice
Very cool theme, unless you don't like war

I don't know where you can get the original Gamemaster Series version of Axis & Allies, because it's been sold out for a long time. But the revised version (which came out a couple decades later) is available at Noble Knight Games - but they only have one, so you better hurry:
GET THIS KICK-ASS GAME
Posted by Matt Drake at 6:22 PM

I have a copy of this version that I bought about a week before seeing the reissue with 2 new units in another store.

My suggestion is look in unpopular chain toy stores (in my neighbourhood that'd be Toys r Us).

Only thing I didn't like about the game was having friends unwilling to read a 32 page rulebook.

I hate this game, but it's mostly because of one bad experience. How they can justify a battalion of rifle infantry shooting down all my advanced bombers at 20,000 feet is beyond me. I wanted to like it, and the pieces are wicked cool, but I can't get over some of the weird hitches in the rules to invest that much time in it.

Granted there are a few things that don't make sense, like infantry defending against planes. But the tactical depth and variety of winning stragegies make this one of my favorite games of all time. Haven't tried any of the other versions since the 2004 revised- I haven't felt a need yet, and that's saying something.

That said, I was not impressed with Axis & Allies D-Day and didn't even try Guadalcanal.

As a correction, the above was supposed to say "Axis & Allies feel in a shorter time investment".

Nice review. While the original Gamemaster and later Revised versions are long out of print, there is a new 1942 version that's still fun and still takes a laong time to play. AND even better there's a new two-game 1940 set (Europe & Pacific) that can be combined into a humoungous 4-map multi-day extravaganza of Axis & Allies! Definitely not for those with short attention spans.

Back in high school, I spent several afternoons recreating WWII with friends. I don't recall ever managing to play a game to completion, but that never stopped me from enjoying it every time!

Still have my copy on a shelf downstairs. And before anyone asks, you can't have it :)

I still own an old copy of this time-honored lil' classic on my shelves (I think I actually got a hold of it through Military Book Club, or some such similar). I've always enjoyed this particular offering from the Gamemaster Series the best out of the lot of them. Still play it from time to time, too.

We were never much chagrined by the whole Infantry vs. Aircraft thingie mentioned above. It was just assumed that the battalions were packing field AA guns along with various other support equipment. A viable supposition considering (if I am recalling this correctly) that the German 88mm AA piece was initially the only thing they found that could penetrate the armor on a Soviet T-34, and so dual-roled them as AT weapons for a while.

A word of caution, though, for anyone who hasn't played and is considering doing so - unless you immediately take the offensive as the Axis (helped with a couple of decent dice rolls), the game is going to slant against you as it goes on. Initially weak, the Allies eventually will outbuy you unless you can at least take Russia out quickly. No small feat, even if you can converge on the Soviets with both Germany and Japan.

Germany can be pretty rapidly tied up with all three of the Allied powers. The Soviets just need to keep Moscow long enough for Britain and America to get a decent force somewhere annoying (like the easily accessible West Coast of Africa). America can keep ferrying material over on an every turn basis without much problem, even while thwapping on the Japanese. The Brits really don't have to do much but build up a stupidly large bomber force and pelt the shit out of Berlin economically - all the way the poorhouse. No cash, no replacements really, after all.

Granted, the rulebook *does* kinda indicate this to you right on the first page or two - but damn.... Unless I got real aggressive, lucky and/or faced an opponent who couldn't find a clue with a map, I was gonna end the night invariably putting a bullet through my head in the bunker after reminding the SS to burn my corpse later.

Personally, I've always loved playing the Axis powers (just like I always rooted for Darth Vader before he pussied out in "Jedi"), but I've only ever actually WON the game with them once.