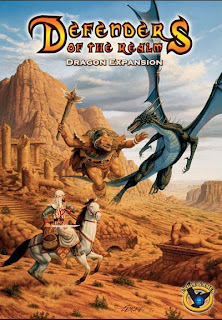 The funny thing about expansions is that while I love to get them, and I love to play them, I don't really like reviewing them all that much. Usually, it's not hard to tell if you want the expansion - if you like the base game, the expansion is usually a pretty obvious choice. If not, there's no reason to throw good money after bad, unless by 'bad' you mean 'topless dancers.'

On the other hand, sometimes (as in the case of the Dragon Expansion for Defenders of the Realm), an expansion is expensive and large enough that it can be tough to decide if you feel like breaking free of the cash, or if you would be better off just taking your wife to dinner and maybe trying to get a little date-night nookie.

If you really enjoy the Pandemic-in-Fantasyland game Defenders of the Realm, you might be considering the Dragon Expansion just because you want to expand the game and play it more. And there are lots of new things in the box. Obviously, there are more dragons - that should probably go without saying, because otherwise the title wouldn't make any sense. But there are also rules for using some dragons as agents of evil rather than generals, or getting a little help from the king, or a better way to determine an overall winner (personally, I think the idea of one player being a winner in what is otherwise a completely cooperative game is stupid, and leads to stupid people doing stupid things out of a ridiculous desire to be crowned the winner).

While there are a lot more tools in this box designed to give you a lot more ways to play, it can still be a little tough to tell why it's worth as much as a decent meal without the kids. There are three dragons inside, but they're the only thing that's not cardboard, and they're really dorky. They look like Happy Meal toys. Not that the figures in the main game don't look like they could have been sold in plastic bags out of a drug store toy aisle, but these dragons really look silly. They're sure not worth as much as what you'll get from your wife if you can get a couple martinis in her.

The new dragons might not look like much, but they are really cool in play. The imps that follow the green dragon spread fast and cause mayhem when they do, and the crazy cultists of the black dragon will hurt you even when you're killing them. The red dragon's flame minions set entire regions on fire. For that matter, so does the red dragon. If you've been married more than ten years, you know that the only way you're going to set your bed on fire is to literally set it on fire, so on this point, the advantage goes to the dragons.

If you play a lot of this game, you can even have recurring characters. Using the King's Champion scoring system, your heroes will earn fame and glory for doing stuff like putting out fires and laundering their socks, and then they'll get rewards that they can use the next time they play. This particular option isn't going to see much play in my house - we don't play Defenders of the Realm more than once a year - but it does add a neat wrinkle if you play more often than you take your wife to Chili's.

The art and components in the Dragon Expansion match right up with the original game, which is a positive way to say that they are just as goofy-looking and poorly designed. There's a giant on the cover fighting a dragon, which is odd because there are no giants in the game. There are also no guys in turbans, but there's one on the cover. I guess this was the only piece they could afford from Larry Elmore's collection. Your wife has probably aged better than the art, so this one might be a point in favor of dinner with your lovely bride. Hell, the menu will probably be prettier than this game.

The Dragon Expansion did provide me with a good reason to go back and play Defenders of the Realm again, so from that angle, it's pretty cool. If you're getting bored with the original, the dragons will make you change your strategies and let you customize your level of difficulty. That's worth a few bucks, because when you can take a game that's starting to get stale and triple the number of times you'll enjoy playing it, that might be worth as much as a couple salisbury steaks and a bloomin' onion.

I'll be hanging on to the Dragon Expansion. I've enjoyed playing Defenders, and I'll continue to enjoy it more with the Dragon Expansion. It's a tough call whether you want to pay as much as most places want for it, but if you do, you'll get a lot more mileage out of Defenders of the Realm. And if you play it with your wife, you might still manage to get laid afterward.

Pros:
Lots of new ways to play
The new dragons change the game considerably, and freshen it up
Set your difficulty level based on how much you play
All new optional rules that let you pick what you want like a cafeteria chow line

Cons:
Still does not look very good
Will probably not get you any sex

You have to decide for yourself whether you feel like paying this much for a game expansion, but if you do, you can find a copy right here, at Noble Knight Games:
GET EXPANDED
Posted by Matt Drake at 2:12 PM

Hey, Matt, I have been reading your reviews non stop for the past three days at work, and they are incredibly entertaining. I'm wondering if you can recommend one or two single player fantasy miniature dice rolling games. My wife enjoys gaming with me, but not as often as I would like. We do have Arkham Horror and both love it.

Hmm. What fantasy game do I like that you play with minis and dice?

Which, by the way, is my favorite game of all time.

However, it's crazy expensive. So if you're feeling a little arts-and-crafty, try Dungeon Plungin'. You have to build it, but it is a great solo dungeon crawler, and there's new stuff developed for it on a completely irregular basis. Plus it's free, which is a pretty good price.

Thanks for reading, man.