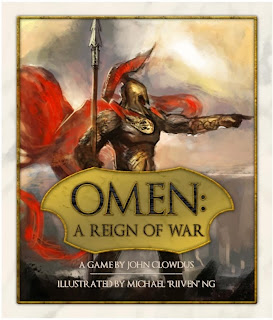 War is awesome. Not real war - that's kind of messy and can lead to indigestion and potentially lead poisoning, unless your enemies are using bullets that don't contain lead, in which case you get brass poisoning or some other kind of poisoning that shows exactly how little I know about how bullets are made.

But everything about war that's not actual war is pretty much kick-ass. Sergeant Rock, Haunted Tank, Guns of Navarone, Dirty Dozen, Band of Brothers, and a whole lot of other entertaining things that I love are directly attributable to war. And most of all, without war, games would mostly suck.

John Clowdus understands that war is awesome. That's why he made Omen. He even subtitled it A Reign of War, because he knows just how cool war is, and he wanted us to know that he knows. And because he knows how much fun you can have with war, he went ahead and made the best game to come out of Small Box Games since he started making games (although A Lone Banner was also excellent, probably because it was about war).

Omen is not about modern war, but that's OK, because old wars are even cooler than new wars, especially when they have monsters in them. So Omen has two players pretending to be ancient Greeks who use mythical creatures, powerful oracles (who are sexy), and bad-ass soldiers to wage war against each other. It's all done with cards, and it's all fun.

Every kind of warrior you can call into battle is on a card. Both of you will draw off the same deck, so you each have the same odds of pulling the minotaur or the pegasus or the servitors of the dead who pull opposing soldiers into the underworld where Hades lights them on fire and cooks them over open lava pits. You'll play your forces of destruction on your side of the three cities, and the other guy will play his, and then you'll fight about it and people will die.

There is a lot of very cool card play in Omen. In typical Clowdus fashion, every card can be used for different things, so you're forever trying to decide how you want to use them. Oracles are helpful for keeping up your cash flow and hand of cards, but they suck in a fight. Beasts are great at fighting, but they also have killer abilities that can only be used if you discard them without ever using them in a battle. Soldiers are good all-around brawlers, but they all have abilities that can totally change the flow of a battle if you play them right.

While Omen plays very quickly, it can be very tricky to make the right move. If you play your cards in the right order, you might be able to dominate two cities at once and still manage to pull off some legendary feats and win favor with the gods of Olympus. But if you play just one card at the wrong time, you could wind up flat broke with all your guys dead in a ditch somewhere while you try to thumb a ride back to Sparta and wind up having to blow a truck driver for a lift.

Smart card play is the key to winning Omen, but that's not to say you can't manipulate some long-term strategies. Building up your oracles can help you maintain a good flow of resources, but might leave you too weak to win any fights. Focusing on quickly winning a few battles could give you a huge lead early on, but you might wind up with no way to keep up momentum and letting your opponent grab control when you're not prepared. You have to be flexible, and not too married to any one plan, but it helps a lot to have a few ideas in mind when you start playing.

All those tactics and strategies can be chucked out the window if you're not paying attention, though, because Omen is nothing if not crazy brutal. You can have ten cards and a pile of cash, and your opponent can play two cards and leave you begging for change at a bus stop with no help for miles around. Or you might see that your opponent is setting up some killer strategy that is bound to cause you untold misery, and unleash just a few cards that rip a hole right through him and send all his half-naked oracle hookers to the afterlife. This is not a game for people who like friendly games with minimal interaction. War is hardcore and violent, just like Omen, and that's why both are this much fun.

Small Box Games is moving into the big-time with Omen. The art alone is proof that Clowdus is committed to making this game a serious contender. If you weren't sure how much war rocks, the flat-out gorgeous art on these cards will make up your mind for you. Omen is not just prettier than any Small Box Games ever made. It's prettier than lots of big-name games that cost twice as much.

With the best art, the best packaging, and the best all-around game play Small Box Games has released so far, Omen is a surefire hit for anyone who likes violence, war and card games. I know I do.

Whether or not you have ever played a game from Small Box, and whether or not you liked them, you're going to love Omen. Unless you don't like war, because then you might enjoy a game about teatime in a rural English village. For people who know how much fun it is to do violence, you can get Omen right here:
http://www.smallboxgames.com
Posted by Matt Drake at 2:47 PM

I was wondering about your opinion-what is more strategic, this game, or Race of the Galaxy? does this game match up to that level?

Or, is this more like Roma? And if you haven't tried Roma, you should.

Basically, I need to know how strategic this game is. I am always interested in games you find fun. However, I also been looking for a certain measure of control in card games.

That is all. No butt jokes, no sodomy, no desire for you, just a question. Thank you, I love you.

I have not played Roma, but I think that in terms of pure strategy, Race for the Galaxy edges out Omen. But just barely, and I could easily see lots of people having a different opinion. Both games allow you to create long-term plans and then use those plans as a guide as you play, so there's a bunch of strategy in both. Race for the Galaxy is only arguably more strategic because of the discarding, when you have to say, 'I've decided to capitalize on yellow cards, so I'll dump these green cards.' Omen allows you to build a considerable strategy, and provides lots of opportunities to make and disrupt plans, but it's not always as hard to figure out what to throw away.

But I like Omen better. It's a lot more brutal, and I like being able to directly affect my opponent, which is the worst thing about Race for the Galaxy (in that there's virtually no interaction at all).

Matt, your review prompte me to go looking for a copy of this game. At the moment smallboxgames doesn't have it on their site but they do have a Kickstarter page that is for a version of Omen that includes Shattered Aegis and also adds a second expansion (though it may qualify for mini-expansion status). Any chance John Clowdus will send you a review set of that expansion set called "Blood Feud". A few extra eyes may go a long ways to boosting the Kickstarter for Omen 2nd edition