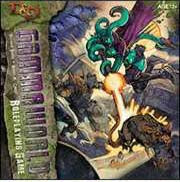 Roleplaying games have a long, solid tradition of being ridiculous. Hell, just look at D&D - the ludicrous variety of monsters should be enough to tip off any reader that any attempt at reality was thrown out a long time ago, leaving us populating underground lairs with landsharks and floating eyeballs. Not to mention the fact that goblins don't poop, as evidenced by the fact that 90% of dungeons are home to hundreds of goblins, but no toilets.

As you grow up, though, many people start to wander more towards the kinds of serious games that stretch their ability to communicate, pose difficult ethical questions, and kill a much narrower range of victims. There are games I've played that could actually happen. They're rare, but still, they're out there.

Then you have people who go the other way, people who say, 'killing giant purple man-bugs is fine, I suppose, but I wish I could play something a little silly.' Playing blue-skinned elves or bearded midgets is just too damned serious. They want to play plants who look like cockroaches. Those people want to play Gamma World.

The newest version of Gamma World is one of the goofiest things I've ever seen. Cat people who manipulate gravity, giant yetis, and people made out of stone - and those are just the PCs. You can jump right past the militant raccoons and psychotic rabbits, and dwell on the absurdity of the yexil. When I showed a picture of this winged lion with insect manidbles to my son, he asked, in a tone he might have used to ask if the house had turned into a glacial ice cap, 'are those lasers coming out of his eyes?'

Yes, son. They are. Laser eyes.

Gamma World has always stood as one of my most absurd memories of early roleplaying games. The explanation for the setting requires more than a suspension of disbelief. It requires a willingness to leave all logic at the door.

In the year 2012, the Hadron Supercollider managed to seriously screw the pooch. Somehow, it broke the plane of reality and thousands of multiverses were torn asunder, and then slapped back on top of each other so that they all existed in the same place. In many worlds, nuclear war had devastated the planet, and in many others, the Rangers had actually won a World Series. Somehow, all these wacky alternate universes ended up creating Gamma Terra, a world in which a swarm of rats could fuse into a single entity and wear armor made from long underwear and discarded refrigerator magnets.

It should go without saying that the roleplaying experience in Gamma World is not intended to be particularly deep. You walk into a room and kill every mutant badger and four-foot mosquito you can see, then root through their belongings for anything that aliens might have created. It's actually more shallow than Dungeons and Dragons. However, if you can go into the game with a sense of humor, it is entirely possible to have a good time.

The rules are very easy. Since this is technically D&D Gamma World, it uses the basic rules from 4th Edition, but stripped down for quick access. Instead of a 300 page tome with at least 30 pages of tables and charts, the actual rules for playing the game are about 80 pages. There are no core rules, players guides, or monster manuals. There is one book, and it's easy to read, with lots and lots of pictures. In case you're not familiar with D&D, the system is very easy - add up your bonuses, roll a d20, and see if you hit. But instead of just beating armor class, you might have to overcome fortitude or reflex or will, mostly because most everyone has some bizarre mutation that can melt minds, or create gravity wells, or shoot ice cubes like a drink dispenser in a fast food restaurant.

Another separation from rational thought occurs when you examine the way these mutations come and go. The players have access to mutations that might be there one minute and gone the next. One day you have poisonous claws, and the next you can see in the dark. This is made possible thanks to the alpha mutation cards, a deck that comes in the box, and at regular intervals, players discard the ones they have and pull more. There's also a deck of omega tech, stuff made by aliens and futuristic civilizations and maybe that nerdy guy from the James Bond movies, and players can draw these every now and then, too.

If I had one real beef with Gamma World, it would be these cards. See, players can create their own decks, so they have more control over what they're drawing, but only if they go out and buy booster packs of overpriced cards. That's right, it's a roleplaying game that wants you to do some blind purchase, CCG style. That stinks, if you ask me. What really stinks is that some of the booster cards are really cool - the base set might give you the ability to find a lost sock in an empty dryer, where the booster cards allow you to manipulate time and space to turn some mutant swine into a throw pillow. If you really want to build a great deck of alpha mutations for yourself, you have to go drop a bunch of money on these cards.

On the other hand, in a game with all the seriousness of clowns getting out of a VW Bug, the two decks of cards do make for some wacky fun. When you finally defeat the rabid rose bush and get to search the planter, it's a great reward to get to pull a couple pieces of bizarre super-tech that will let you turn brains into tapioca or start levitating around the room. But to my surprise, the part my kids liked the most was the ancient trash.

A rather long table gives 100 pieces of discarded crap that players might find, and my kids willingly jumped right past the omega tech cards for a chance to score a box of cake mix or an electric razor. They would forfeit all the really great treasure for a few rolls on this random chart of stupid crap, and some of it, they even used. My son found a stocking cap, for example, which he pulled over the camera sensors of a death-dealing robot, causing it to veer out of control and crash into a huge piece of machinery, creating a massive fireball of destruction. And he was then disappointed to have lost the hat.

It helps considerably that the box comes with eight different scenario maps, with are all used in the sample adventure at the back of the rules. The game also comes with a bunch of flat counters to represent all the monsters in the rules, which makes running battles that much more entertaining. The character sheets practically walk you through rolling up a hero, and all in all, this is just a really easy game to play.

Unfortunately, it also appears to be almost completely unsupported. As is almost always the case with Wizards of the Coast, they pour copious resources into D&D and Magic, leaving just about everything else to thrash around a while before dying an early death. The only support material for Gamma World that you can even buy right now are the booster packs of cards. There are a couple expansions planned, recreating a couple of the classic modules from way back in the day, but I can't get them now. And a game this completely goofy is not inspiring me to create my own adventures, so I fear we won't be playing it again until Famine in Far-Go hits the street.

I can't really bash Gamma World for being stupid. It's like complaining about Vegas having too much gambling or NASCAR having too many car wrecks. If you're hoping to get something out of Gamma World besides pure dopey fun, you have chosen the wrong game. But if you can just unplug the part of your brain that keeps you from having a conversation with your toaster, Gamma World is easy to play and a goofy good time.

Cons:
Completely absurd, which is only a con if you're not a fan of absurdity
Collectible cards make Baby Jesus cry

OK, here's the deal. Noble Knight Games sends me products to review. Without them, I never could have reviewed this game, for instance. But this whole thing only works if they see a little payback for it, so if you want to support Drake's Flames, you don't need to send money or go chasing click-throughs. All you have to do is, if you're going to buy Gamma World, go buy it from them:
SUPER LONG LINK
Posted by Matt Drake at 2:23 PM

thanks for another great review, I played this as a kid, and I remember us having some silly crazy fun adventures that did not make sense, but then we where not looking for something serious. I have wondered how the new one would compare.

Could you just make your own booster cards with you own made up powers?

I can't imagine why you couldn't make your own, except that the cards are pretty dark. You would have to either be really handy at taking apart a playing card and pasting it back together, or just slap some sticky paper on it with your own powers.

It would be sweet if they released blank booster cards.

I recall going through a rather nasty fight with my co-conspirators during one gamma world game over...a bert and ernie button. We all wanted that thing BAD! Well into our teens we still had an appreciation for the finer things life offers and only the last man standing would obtain the stupid button. Good times.

Blind buy element added into a roleplaying game? I recall listening to a podcast describing this a while back and couldn't beleive it then until I read your review now. Talk about taking a deuce on a game.

Protip for WotC: Not every game you create has to be even remotely collectible in order to make a profit.