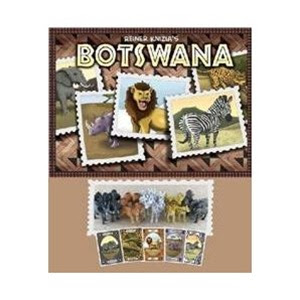 I think I've finally figured out a little something about Doctor Reiner Knizia. I used to wonder what kind of doctor he is. Is he a foot doctor? Is he a neurosurgeon? Or maybe he's just an over-qualified dentist? But I think I have come up with a plausible answer - he's a doctor of environmental studies. Clearly, he understands just how life in the African savanna really works.

And to educate those of us who did not know about the circle of life in the sweeping plains of the subcontinent, he created Botswana. Not the country - that was already there. He may have donated a hospital wing or something, but I'm pretty sure the country existed before Reiner showed up. No, he made a game called Botswana that will teach the youth of the world about the ebb and flow of the African animal kingdom in the heart of darkest Africa (please note that Botswana is not actually very dark - it's quite sunny).

In order to focus the educational potential like a laser, Dr. K only included five kinds of animals. Botswana has more, maybe as many as nine or ten, but we just get elephants, zebras, rhinos, lions and leopards (the limited animal count may have been due to the fact that there are five plastic animals of each kind, and they didn't want to have to figure out where to score a few thousand plastic vervet monkeys). And to further distill our education, rather than one of those dull, unimaginative games created for grade-school teachers, this is actually an abstract card game.

There are six cards for each animal (30 total, in case you suck at math), ranked zero through five. You take out a few, and pass the rest out to everyone equally. Then you take turns playing one card and grabbing one little plastic animal. You can put down any card you want, and take any animal you want. At the end of the round, each animal you grabbed is worth however many points are on the last card played with that animal's picture.

When I first read the rules for Botswana, I had two thoughts:

Thought #2: "What the hell does this have to do with Botswana?"

But then I played, and I realized that Botswana is actually a pretty cool game. Sure, it's a Reiner game, but it ain't bad. My daughter liked it a lot. She also won by a wide margin. I kind of suck at card games, and this game would be best played by someone who is very good at games like Hearts and Spades, two games I lose nearly every time I play.

There's an almost overwhelming amount of strategy to employ in Botswana. You get your hand and have to decide right off which animals you want to see become very valuable, and which you want to destroy. Then you try to con your fellow players into taking the ones you're going to ruin, while attempting to grab up all the ones you mean to make rich. This is not anywhere near as easy as it sounds, and it doesn't really sound easy. Because all the other players are trying to do the same thing, and if you're playing with my daughter, at least one of them is far better at this than you are.

Timing is critical. Because there comes a point when the game could end at any moment, you're never sure if you can afford to play the low elephant or if you should play the high zebra (high zebras, incidentally, are how zebra-mule hybrids got started). If you play the wrong card, you could hand over the game on a silver platter. Play the right card at the wrong time, and again, you could hose yourself. But time your plays perfectly, and grab the right animals at the right time, and you'll completely destroy your opponents. Kind of like my daughter.

So how is this educational? OK, I lied, it's not. It's an abstract game. You could swap out the animals for flavored condoms, and have the same exact game (and potentially, a much better time afterward). The only reason this game has anything to do with the country is that both have animals, only in the card game, they're not real (it would have been incredibly difficult to fit 25 actual animals in the box, and it would have smelled absolutely horrible). But it is still a pretty cool card game. Just don't try to figure out what it has to do with Africa.

I guess I still don't know what kind of doctor Reiner is. He might be a proctologist - he seems to make a lot of games that stink - but something tells me his work has a lot more to do with math in a classroom than sick people on a gurney. But I do at least know that Botswana is a fun game, whatever Dr. K studied for his big, shiny degree.

Noble Knight is carrying Botswana, and you can save a couple bucks, too.
LONG LINK
Posted by Matt Drake at 1:58 PM

You know, he could be one of those "Doctor"s whose only real claim to the title is that it's their name. It's a practice you don't see as much anymore, but parents used to give their children a title as a name with a middle name that was plausible as a first name with hopes their children would grow into the title.

Doctor Philastus Hurlbut is the most famous one I can think of. He was a con man using his name to get a privileged position in whatever community he was in.

Knizia has a PhD in Math

It seems to be very interesting. I am waiting when it would be launched.
It would be fun as it provides a lot of new features.