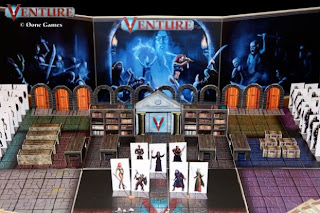 I'm not in the habit of reviewing PDF products. For one thing, my printer blows through ink like a crack-head with an eight-ball, and nearly anything you download as a PDF is going to require like fifty pages, which means by the end, my printer will be spitting out blank pages. So I suppose I could take it to Kinkos, but then you still have to put it all together afterward, and now any savings you were hoping to score for buying an electronic game are chewed up in glue sticks and printing expenses. Plus, if your time is worth more than four bucks an hour, PDF games usually set you back a couple hundred dollars in lost wages.

But then I saw Venture, and I knew that I was going to have to ask for a review copy, even though it was just going to be a download link. Hell, it's a dungeon crawl, and you can almost always sell me a dungeon crawl, even if I have to put the bastard together myself. Plus the art really sells it. Call me a snob if you want, but when a game has good art, it tells me that the publisher has put some effort into his product. Sure, there are ugly games that are fun, and pretty games that suck, but I like to think of those as statistical outliers. And when a game is a dungeon crawl, the art is especially important, because good art sells a theme better than the rules ever can.

So I bit the bullet, got a copy of Venture, and printed it out. Then I built it. This was not a simple process, as there are what seems to be a completely unnecessary number of paper figures to assemble. I mean there are lots and lots of them. Which is cool, I guess, but after a while, you start to wonder if you're ever really going to need a dozen orcs. Most of the rooms aren't even big enough to hold that many. But I soldiered through and finished. I mounted the boards on foam core, and glued all the doors and figures together, and cut out all the cards and stuck them in sleeves. There's even a nice, big piece of cover art that you can put on a box to hold all this stuff (I bought a jigsaw puzzle at a thrift store, threw out the puzzle, and redecorated the box. It works great, but my garbage man probably thinks I totally suck at jigsaw puzzles).

When the game was assembled, I was quite impressed with what I had built. The figures are pretty darn nice, for being paper miniatures. The boards are attractive and easy to play. The doors are cool, the cardstock furniture is swanky, and the cards all have pretty slick art. The rules are attractive, too, and they make sense right out of the gate. Combat and movement are simple, and most monsters are basically just collections of stats, which makes them pretty simple to set up and knock down.

Which is, at first, exactly what you'll do. Most of the monsters are meant to be slightly more challenging than wet toilet paper. If they get super lucky, they might give you a black eye before they fall, but usually, they're really just there to wear you down a little before things get all gnarly - which they do when you finally find the big bad guy. Because then the mean ol' beastie can actually kill you, and if you're not careful, he does. Even the ogre in the introductory adventure can stomp a mudhole in at least one of the heroes before he goes down.

Venture is not a cooperative game. I would say that the optimal player choice is two people, where one person runs the heroes and the other runs the bad guys. This is basically a HeroQuest clone, so one guy is doing everything he can to murderize a group of heroes, and the other player is tromping around performing unpleasant home invasions and stealing everything that isn't nailed down.

A few elements of Venture were cooler than HeroQuest. For instance, the campaign mode allows players to get the sense that they're improving over time, as opposed to HeroQuest, where you're essentially stuck as first-level goobers and your only improvements are better weapons. Also, Venture's rooms and corridors open up a lot wider, which does away with the problem I always had in HeroQuest, where the barbarian can't get to the gargoyle because the dwarf is in the way, and the wizard is stuck next to the chaos knight because the elf has him boxed in. There's a lot more room to maneuver in Venture, which I personally find exceptionally refreshing.

I also really liked the way the heroes get treasure, and how the bad guys get more powerful if the heroes dick around too much. Every now and then, the monster player will get to draw a card from the 'sweet powers for evil' deck, and this happens even more if the heroes drag their feet. Rush right for the bad guy, and you miss out on all the good treasure, but explore every corner, and the end boss is likely to get too tough to beat.

Unfortunately, as pretty as my Venture game is now, it's still got nothing on the visual appeal of HeroQuest. I love those little plastic miniatures, and the dungeon decorations really add flavor, even if they do clutter up the board even more. Plus it's a lot easier to run a battle using plastic figures, because the paper minis have a tendency to scatter every time someone at the table exhales loudly. So if you buy Venture, consider not assembling the miniatures at all, and just use some D&D prepaints.

Venture comes with enough adventures to keep you busy for a while, but if you like the game, you're going to run out eventually. But there's good news - the publisher has several free adventures available at the site, and even better, they've got an actual expansion cooking. Personally, I'm looking forward to it, and plan to buy it when it's available, and I plan to play all the free scenarios while I wait.

Venture still has one huge hurdle to jump - you have to build it if you want it. I would be thrilled to pay a lot more for the same game full of plastic miniatures and premounted playing boards, but that's not likely to happen. There's a small company who will build you the game for another $65, but it's still not the same as having figures instead of paper standups. Still, if a download is the only way to get this easy-but-entertaining dungeon crawler, I'll suck it up and drain my printer.

I just have to wait until payday. Ink cartridges aren't free.

Cons:
You have to print it yourself - and then you have to build it
Paper minis are a pain in my ass

If you like dungeon crawl games, you're probably going to dig the hell out of Venture. If you're cool with building it yourself, you really should run over and get yourself a copy:
http://0onegames.com/catalog/index.php?manufacturers_id=20
Posted by Matt Drake at 4:13 PM

Matt, instead of printing all the wee beasties and whatnot, can you simply sub in D&D Fantasy Adventure BG guys?