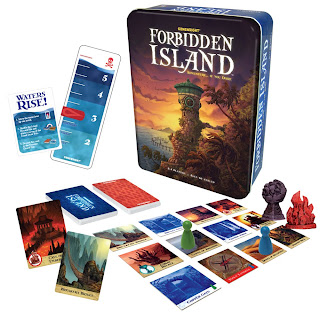 Let's say, like me, that you have a child with whom you enjoy playing games. Let's further say that this child is a very bad sport. Let's further say that when you invade this child's home port and steal her resources, she breaks down and cries before assuming a countenance darker than the inside of a cow's asshole, and may or may not slam the door to her bedroom in a fit of rage that makes you wonder if it's possible that she might have been adopted, even though you were there when she was born.

In this unhappy case, you really need a cooperative game. In a cooperative game, nobody will try to swipe your demon child's sheep, or force her to discard, or destroy her capital city. Everyone teams up against a common foe, which is great because nobody really wants to be around when your unholy spawn has a teenage angst fit after she assumes that you hate her if you manage to build track through her coal-rich mountains. And if you want a quick, tense cooperative game with amazing visual and tactile appeal, you should try Forbidden Island.

In Forbidden Island, the players are a team of adventurers who have just discovered the location of a mystical island. This island holds four wondrous treasures, but it has been booby-trapped by the ancients. As soon as you set down, the island begins to sink beneath the sea, and you must race against time to gather the fabulous treasures and escape with your lives. That's a pretty exciting story, if you ask me. It would make a kick-ass movie. It could star some professional-wrestler-turned-action-movie-icon, and have lots of harrowing scenes of narrow escapes. It might also need naked women (but then, any movie could be better if it had naked women).

The game plays a lot like Pandemic, except that it's not anywhere near as much work. You have to collect cards that match the treasures, travel to the tile where you can swap those cards for the artifact, and then after you get all four, escape to the helicopter pad. And every turn, you're flipping cards that flip the tiles. Flip a tile once, it's flooded. Flip a flooded tile, and it sinks into the ocean forever. Eventually this entire island is going to be underwater. Hopefully John Cena and the naked girl can get off the island first.

Turns go incredibly fast. You'll do three things, draw two treasure cards, then flip some cards to figure out what sinks. At first, the island sinks fairly slow, but it speeds up pretty quick. Happily, you also collect what you need pretty fast, so it works out. In fact, in every game we've played, we were down to the wire. This gorgeous little game plays in fifteen minutes and still manages to get your heart racing, at least for the first half-dozen games.

Forbidden Island became an instant favorite at my house. We've played it five or six times now, and enjoyed the hell out of it every time. By comparison, we played Pandemic twice before I packed it up and shipped it to my father, who I hope has had more fun with it than we did. Many of the mechanics in Forbidden Island can be found in Pandemic - different character abilities that interact with each other, balancing forward progress with the need to slow down the advancing doom, and passing cards between players to get the right sets collected. But where Pandemic requires a great deal of long-term thinking and very careful planning, Forbidden Island plays fast and exciting and a little zany.

Of course, being this similar to Pandemic means that it's also prone to the worst thing about cooperative games - head jackass syndrome, where one person tells everyone else what to do on their turns. Fortunately, we've discovered that if we all just do whatever the daughter tells us, we can still win most of the time, play a family game, and nobody winds up wondering if they will be killed in their sleep. Everybody wins, even if we lose.

I can't emphasize enough how attractive Forbidden Island is. The art is so amazing that I want to visit the place, even if it is about to sink beneath the waves (I especially want to visit if that naked girl is going to be there, but I would probably not survive to the end of the movie. I would end up dying to create tension, and make people wonder how Dwayne Johnson is going to get the naked girl off the island). The treasures are wonderfully sculpted and just plain cool, especially the fire treasure that looks like a Ring Pop.

There's an awful lot to love about Forbidden Island, even if you're not trying to deal with a teenager who hates having to compete. It's light and fast and exciting, with absolutely stunning art and fun pieces. You can pull the game out of the closet, set up and play, all while you're waiting for the pizza guy. The end is down to the wire in most cases, and it scales well regardless of the number of players. It might stale over time, but if it does, give it a couple months and you'll be looking forward to another visit. You and Jesse Venture and a naked girl would have a blast.

Pros:
So damned pretty
Tense and fast
Fun cooperative game that you can finish in twenty minutes

If you run over to Noble Knight Games, you can get Forbidden Island for just 14 bucks. That's money well spent, let me tell you.
LONG LINK
Posted by Matt Drake at 7:24 PM

you may try different island formations from easy to superhard.

Have you played it with 6 players, and does that work well? The box cover says 2-4 players, but it sounds as if it has enough components for 6.

We haven't played with more than four. But I'd assume 6 would be fine, but it might make the game too easy.

For added replay, the German version of the game came with additional tile arrangements. These have been translated and posted here: http://boardgamegeek.com/thread/569926/official-variant-tile-layouts

playing with 6 : I've tried it : it is actually impossible to win : it takes more time to get sets of cards with one player. and the island sinks so darn fast... even on the lowest starting level : impossible.