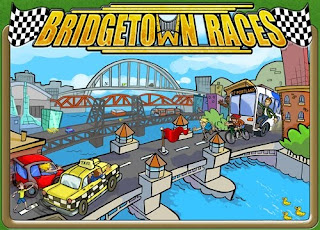 When I was a young man just out of college, I spent a winter in Portland, Oregon. It was effing cold, was the main thing I remember, and there were a ton of bridges. So I have no problem believing that when the creators of Bridgetown Races needed a city with lots of bridges where they could hold races, Portland was the logical choice. With the Willamette River running right through the middle of the city, they had to put in a buttload of bridges just so I could get to work. Of course, since these were drawbridges, any time I was late to work, the bridge would be up in the air.

Happily, in Bridgetown Races, the bridges are never up. That's convenient, because there's a flag on every bridge, and you have to race your ass off to go pick up one of each color. You can only pick up a yellow flag, for instance, if you're in a taxi, and a white flag can only be nabbed if you're hoofing it. The blue flag is a bitch, because the only way to get that one is in a streetcar going across the Steel Bridge. But it could be worse - the damned bridge could be up, and then you would be screwed.

When you open the box to play Bridgetown Races, you're not going to be instantly amazed at the beauty and wonder of the stuff in the box. Instead, you might wonder if you're about to play a game as underwhelming as the cartoony art and slightly hideous color palette. Wooden pawns and plastic flags in a rainbow of fruit flavors might mean a delicious sugary breakfast cereal, but they rarely indicate a thrilling game.

But just play it once, and you won't care if the art is on the bland side. This game will make your head swim, as you try to plan a turn with a motorcycle, a car and a pair of roller blades that will manage to score the orange flag on Burnside and the purple on Hawthorne. If you don't watch the other players, they might just grab the flags before you can get there, and if you don't count the spaces just right, you'll wind up one space short of the flag you need in the wrong kind of vehicle.

Another thing that you can't see from the uninspiring graphics is how fast-paced and exciting this game is. You might even want to turn on some high-energy rave music (ecstasy pills are optional), because you'll really feel like you're hauling ass. The more people you add to this game, the more frenetic it will feel, with the chaos factor rocketing like your grandpa's heart rate at a titty bar.

The whole thing is over in half an hour, maybe less, but that just means this is a short game. That does NOT mean it's a filler. Fillers are light games that require minimal effort. Bridgetown Races demands that you pay attention, and while it goes fast, you'll need a lot of brainpower to stay ahead.

The graphics may not be top-notch, but they're really not that bad. They're especially forgivable when you see that Bridgetown Races is a lean, mean, fast-action racing game that's just a big fat pile of fun. This is the best game Gryphon Games has produced yet, and if they keep making them this good, maybe I can overlook all the crappy Reiner reprints.

Pros:
Fast and exciting
Much deeper than it seems it should be
Tactics, planning, and a good long-term strategy are all required to win
None of the bridges are up

Cons:
Not as visually awesome as it could have been

Thank you for your article, really helpful material.