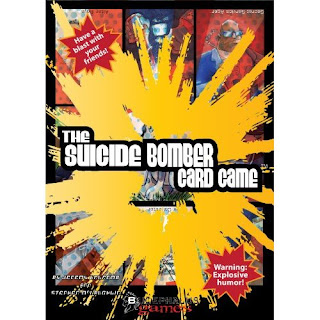 It's not often you get to play a game that grants a really powerful moral guide. I mean, most games offer lessons like, 'don't let your guys get surrounded' or 'build sections of high-scoring tiles' or 'put this one piece on top of that other piece'. But how often can you say that you've played a game that really drives home how bad it is to blow up a church-going grandmother with a homemade bomb? Not very often, I'll tell you that. Sure, you can learn about how the good guys should beat the bad guys, but it takes real balls to come right out and say, 'don't blow up old ladies. It's freaking rude.'

In Suicide Bombers, you equip crazed killers (who may be anything from mailroom clerks or corporate drones to political activists or politicians) and then send them out into the city to wreak destruction and havoc. And I must say, this is one messed-up city, because it gets bombed more often than Paris Hilton.

The city is made up of a grid of people cards. Not all the people cards show people - some are buildings. It's totally awesome to blow up the morgue and have it fall on nuns. It's also horrible. You should never do that. You hear me? Don't blow up a nun. It's wrong. But it is worth two points, which might confuse your moral compass a little.

You blow stuff up in this city by slipping bomb cards underneath people cards and then counting them down. Every turn, bombs tick closer to detonation, until they go off in a fiery blaze and kill bike couriers and people who are eating at the cafe. When they explode, arrows point to which cards get destroyed, and you get points for destroying them - unless you kill the puppy, because he's worth negative points. You should never blow up the puppy. It's sick and wrong. Don't do it.

There are lots of card combos working here. Like if you move a courier, you can move someone else, and then you can move a bomber next to the undercover agent, who takes a bomb counter off him and makes him take longer to blow up. Or you could play the political leader next to the secret service agent, to try to protect him a little, or hide everyone behind a building so that they can't be moved out into the open where the bomb can get them. But since you don't know which directions the blast will travel, sometimes you'll think you're tricky, but the other bomber is really the tricky one, and he fools you into putting his bomber next to the high priest and a couple altar boys, and then he moves your bomber next to the sorry-assed corporate drone and ends his miserable life, costing you points while he laughs all the way to the bomber's bank.

I joke a little about the moral lesson in this game, but it really is a little tough to stomach, even for dark humor. I'm not kidding about the puppy. He's really in there, and you can really kill him (though you don't want to kill him, unless you can maneuver your opponent into killing the puppy, but then you're still trying to kill the puppy, aren't you?). You can kill altar boys and political activists and CEOs (granted, I don't feel guilty about the CEO. That part is fine with me, especially if the CEO took a bailout).

But it's humor, and it's meant to be amusing. My son and I laughed while we played, though my wife left the room because she thought the game was too twisted. And it's clever, too - timing explosions to go off when you want them, and screwing up your opponents plans, and maneuvering to maximize body counts are all things that make this a pretty decent little game. There's just enough strategy to reward the better player, and enough guesswork and luck to let anyone win if he's lucky enough.

I can't really think of much bad to say about Suicide Bomber, really. It's fun, and the art is amusing as hell. And it completely avoids making any ethnic stereotypes (I'm especially happy about that, because the first thing I thought when the planes brought down the WTC was, 'I bet it was those damned Swedes').

In fact, I guess if I had a complaint, it would be that this game isn't offensive enough. Sure, you can blow up a puppy with a bomb strapped to a child, but honestly, is there anyone in the US who thinks, 'suicide bomber' and then thinks, 'nun'? It seems to me that Suicide Bomber slaps on a heavy coat of twisted dark humor, but still tries to play it politically correct. Let's face it, there aren't that many French Canadian suicide bombers, and I think that if you're going to make a game as effed up as this, you should have the stones to come right out and say what we're all thinking.

But really, that probably would have been a bit much, and they almost certainly would have been shouted down as racists if they had made the bombers come from the Middle East. Besides, it wouldn't really have worked, because in this game, ANYONE can be a suicide bomber (except the puppy and the undercover agent), which is kind of the silly-but-black point. In fact, it's likely that they're trying to be all subtle about pointing out that not only Middle Easterners strap bombs to their chests. All I'm saying is, the game seems to be stomping hard on suicide bombers while going on tip toes around the most likely candidates for the job.

So in the end, Suicide Bomber was the best game I've played yet from Bucephalus Games, but it is really, really dark, and the timing on the humor might have been better. It's light and tricky and fast and sick and funny. I recommend it, as long as you're the kind of sick bastard who can find humor in getting a couple more points because you scored the televangelist/tax collector/marketing weasel trifecta.

Pros:
Dark and funny, with fun art
Easy to learn and plays really fast
Surprising levels of strategy and planning

Cons:
You can blow up a puppy

You can get your very own copy of Suicide Bomber right here:
http://www.amazon.com/gp/product/B001JLCUCK?ie=UTF8&tag=purplepawn-20&linkCode=as2&camp=1789&creative=9325&creativeASIN=B001JLCUCK
Posted by Matt Drake at 9:09 PM

Great article as for me. I'd like to read something more about that topic.
By the way check the design I've made myself Overnight escorts

Hello, i would like to read more about this interesting topic, i think that this post is very good.