Board Game Review - Toboggans of Doom 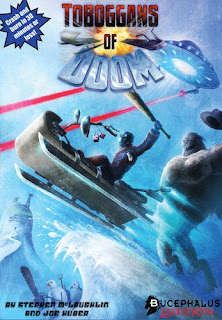 If you ever wanted to pilot a super-powered sled down a mountain full of yetis, ninja and acid pits, then you're obviously more than a little out of touch with reality. You can't do that. They don't put all that crap on mountains. Can you imagine what it would do for tourism? Aspen would be shut down!

But it would be kind of cool to watch. Maybe we can convince Justin Timberlake to make a new reality TV show where people drive insane sleds down mountains full of blade-wielding snowmen and sharks. It might have to be a cartoon, but then, I'm not sure Justin Timberlake isn't a cartoon.

So that's not all that likely either - which leaves us with our next alternative, make the idea into a game. And that's what Bucephalus Games decided to do when they created Toboggans of Doom, one of the silliest games I've ever played. Player take turns buying ridiculous upgrades for their super-toboggans, then race them down mountains and try to avoid being destroyed by meteor showers and really boring accountants.

Toboggans of Doom is really more of a dice game than anything else, but the theme in this game is off the chain (I hear the kids say that these days, but I'm not really sure what it means. In my day, we said it was radical, and my old man said it was far out. I think those all mean about the same thing). You roll a handful of those crazy RPG dice (the ones with four sides, or eight, or twelve, or whatever else) and use them to buy upgrades. This part is actually pretty darn clever - if you plan your purchases, you can do pretty well. You might be able to build a sled that could conquer Everest, as long as Everest was overrun with sasquatches and your ex-girlfriend.

Then you jump on your pimped ride and head down the mountain, revealing tiles as you go. If a tile shows an obstacle you have to go over, you must have an 'over' upgrade. The same applies to obstacles you have go through or around - you have to have an upgrade that gives you the ability to pull that off. These upgrades might be anti-gravity devices, or chopper blades, or an army of moles. And then you have to roll dice.

In my opinion, this is where this crazy, silly, fun game starts to derail a little. The mechanics seem sound - 'over' obstacles make you roll high, 'around' obstacles make you roll low, and 'through' make you roll between two numbers. But your opponent rolls, and then you roll, and sometimes you couldn't succeed if God himself blew on your dice, and sometimes you couldn't fail if you wanted to. Early on, that's OK, but by the third run, it gets a little tiresome to be trying impotently to stop your opponent, and then when he rolls, he has you trying to get under a 1 when the best you could possibly do is a 3.

But this part I can excuse as a wacky, silly dice game. It's still fun to avoid caffeine withdrawal with a Quake rocket jump, even if the dice are horribly unpredictable. You race down the mountain, trying to be the first person to complete a whole run, and hoping you can stop your opponent with a bear trap or UFO tractor beam. But there's one rule in this game that I find completely destroys the game - the winning condition. The first person to complete a run is the winner, but you only get three chances to run, so if the first player in the second round finishes a run, the game is over and you only got to try once. That can leave you feeling pretty darn cheated.

Happily, there's an easy fix, and one that I'm surprised Bucephalus Games didn't create on their own. We simply change the winning conditions. Since you get points for every tile you get past, just compare points at the end of the game. That's it. It's the easiest game fix ever, and now when we play, that's how we do it, and we have a lot more fun.

I can't understand why someone didn't tell the designers of Toboggans of Doom to fix the endgame rules, or why they ignored the advice if someone did, but it doesn't really matter. If you play the game the way the rules tell you, you're not going to be happy. If you change it just a little, it's actually pretty damned cool. Changing the winning condition feels wrong, to be honest, but not nearly as wrong as rolling a 1 when you need a 12 and having to look at the other guy and say, 'yeah, OK, you win,' and you didn't even get a chance to try out your portable hole on the commandos.

If you're a hardcore, play-by-the-rules kind of gamer, I cannot recommend Toboggans of Doom, because the winning conditions ruin what could be a diverting entertainment. But if you're willing to be a little flexible, and you like a lot of silliness now and then, and you don't mind tons of luck, and you're OK with using orbital re-entry to get past the Viking opera, you'll probably enjoy Toboggans of Doom.

If you want a silly, random, funny dice game with crazy art and goofy powers, Toboggans of Doom should just about do it. Dogstar Games tells me they're trying to get these in stock, and if they do, you'll save bank on the shipping, but in the meantime, you can find the game here:
http://shop.bucephalus.biz/catalog/toboggans_of_doom/16
Posted by Matt Drake at 9:58 PM