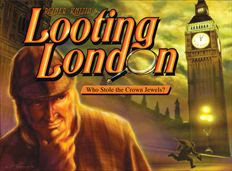 London has been hit with a crime wave! The crown jewels have been stolen, along with priceless Incan artifacts, invaluable paintings, and other stuff you have to get back! Questions suspects and find the missing loot! Don't let the thieves get away!

Or, the cows are getting away! The bull has run off, and so has the milk cow and the prize-winning calf! Round up some cowboys and chase down the herd before the storm comes! Save the ranch!

Or, Forgetful Larry has forgotten where he left the stash of booze! You can't find the Wild Turkey, the Colt .45, or the Boone's Farm! Get the other bums to help you find the missing bottles! Get drunk!

So yeah, Looting London is a Reiner game. I could spend another five paragraphs coming up with themes that would apply just as well as the crime spree theme, but then you couldn't reuse the art from three other Reiner games to make a new Reiner game, unless all the other Reiner games somehow included cattle or cheap alcohol.

In Looting London, five things have been stolen at once. Apparently Scotland Yard took the night off to go on a team-building retreat, and in their absence, thieves stole everything that wasn't nailed down. The five treasures are represented by round counters with numbers on them. The crown jewels are worth 5 points, the painting is worth 4, and the Incan statue is worth 3 (apparently not that many people were going to the Cultures of the Amazon Basin exhibit anyway).

You also have a grid of 25 square counters. These are in different colors (matching the stolen treasures), with numbers on them, and pictures of people who might have seen something. There are four witnesses, and they have basically equal chances of having seen the bad guys running around London with a huge rental van, tossing everything from the crown to your granny's dentures into the back.

Finally you've got a deck of cards. There are only four different cards, each showing a witness - the cop (who was apparently working, but who was probably spread a little thin thanks to being the only policeman on duty that night), the organ grinder (he's an idiot, but his monkey might have seen something), the street urchin (who was probably begging for money to give to the organ grinder, so he could watch the monkey dance) and the society dame (who is on the cover of High Society).

The object is to play sets of matching cards to pick up the square tiles. If the square tile shows the overworked cop, you'll need to play cards that show the cop, and if it's the urchin, you'll need his cards, and if it's the society dame, you can probably get by with a fancy invitation (but since there are none of those in the box, you'll need cards with her picture on them, which you probably figured out, but it's worth mentioning). The square tiles are worth points on their own, but if you have the majority in a particular color, you also solve the crime and find out what happened to the matching loot. And since you're trying to cover up the fact that you were all playing paintball in the woods instead of stopping the criminals, you might want to destroy evidence now and then, which you do by discarding matching pairs of witness cards, but then you have to be able to take the next square tile in line.

That's the basics of the game. It's not particularly deep, but it is fairly tricky. You can't draw after you play cards, so you might have what you need to grab a tile you might want, but you might want to hold off and try to get a better tile, but in the meantime someone else might grab the tile you want and then you'll feel stupid. You want to grab tiles in the colors that will get you bonuses, but since the square tiles are still worth points, you might also want to grab a few big numbers even if they don't get the round tiles. There are enough tricky decisions that you may find yourself taking longer than you should, and the other players will get annoyed at you (until it's their turn, and they do the same thing, and then you'll be annoyed at them).

Looting London ends pretty quick. We played several games back to back in less than an hour, and the fact that we were all willing to play three times in a row says that even if the theme was completely pointless (aside from a way to recycle art), the game itself was pretty fun. There's a fair amount of strategy and quick thinking, nice quality components, and easy rules that play pretty fast. If you're looking for a quick game that won't overtax you but still puts up a fight, Looting London might be what you want.

Pros:
Quick to learn and play
Simple, but with a good amount of depth
Good opportunities for strategy or planning

Cons:
Why even bother with the theme?
Art seems to be recycled from two or three other games

OK, here's the deal with Looting London. As far as I can tell, it's not out yet, except in Germany where it has a completely different name that is, coincidentally, in German (I think). It's new from Gryphon Games, so I figure if you give it a bit, someone ought to have it somewhere. Hell, keep an eye on Dogstar Games - they'll probably end up throwing you some free shipping.
Posted by Matt Drake at 7:00 PM