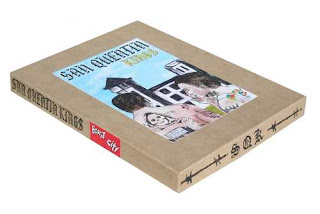 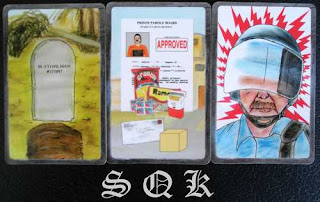 When I play a game, theme is important. I like to feel like a Japanese warlord waging mayhem across the island, or a muscled barbarian shattering orc skulls, or a world-renowned race car driver screeching through tight turns on the streets of Monaco. A good theme can transport us to deep space, or the Roaring 20's, or the Wild West.

Yes, when I think of a theme that makes me want to play a game, prison falls somewhere between alpaca farming and sewer maintenance. And that would have to be a pretty graphic game about cleaning sewers, or prison is even lower than that. If there's a place I don't want to be transported, it's the hoosegow. Prison is not a fun place where fun stuff happens. When I think prison, I think of painful stabbings, painful beatings, and painful loving.

Apparently the theme appealed a lot more to the guys that made San Quentin Kings. In this game of questionable moral value, players take on gang leaders who recruit, buy drugs, stab people and bribe guards. You can also work out.

San Quentin Kings isn't just a game about prison, it appears to have been made in prison. The cards are semi-decent, probably from a short-run custom card printer, but the art is really not great at all. There's one picture that shows horses and a green monkey crawling out of what looks like a vagina, but is more likely a baggie of mixed drugs (short aside - I know brown horse is heroin, and white horse is heroin, but I confess to having no idea whatsoever what kind of drugs would be depicted by a green monkey). The board is mounted on a single piece of thick card that bows up and won't lay flat. The pieces are wooden cubes and cylinders that look like they rolled out of my copy of Carcassonne. The box has about the same component quality as a bag of stale fish.

So right off the bat, as soon as I open the box, I'm dreading my open statement that I'll review anything you can send me. The game is not just unattractive, it's about prison brawls and drug habits. I'm groaning out loud, especially when I try to think who I know who would play a game where you cut your opponents with knives made out of bedsprings (for an extra chuckle, the game has been translated into German. This is funny because Germans tend to make games about raising sheep and building churches, so I question the decision to allow them the opportunity to try their hand at trading cigarettes for homeade weapons).

But when I accept a review copy, I do my damnedest to write the review, so I went ahead and played San Quentin Kings.

And liked it. Sweet merciful mother, San Quentin Kings is very well-designed game. I can't pretend I wanted to like this game. The theme alone is a good reason to avoid it like genital warts, but when you add in some really low production value, it just doesn't seem like this game should have anything going for it at all. And then you wind up playing, and it's not only a really clever game, it's actually a whole lot of fun.

(I have to pause for a moment and wonder about the final destination of my soul, when I had a great time playing a game where I pulled a close second because I had the most heroin. I also did pretty well in the fights, and managed to stab a man to death. Wheeee!!)

The funny thing is, San Quentin Kings is not at all the game you would expect it to be. You might be expecting a tactical brawl with blood all over the place, but instead you get what is almost a Euro game (and probably would be, if it weren't for the knife wounds and prison tattoos). You have a limited number of thugs to carry out your orders, and an unlucky fight might send them to solitary - or the prison morgue. You'll need felonious assistants to make knives from discarded license plates, to pick up a carton of smokes and a box of ramen noodles, or to recruit new fish as they step off the bus. And you don't just spend them - you have to fight with them. You plan ahead, seize actions when they work, and otherwise try to improve your standing without throwing away all your resources. It's a lot like Puerto Rico, but instead of raising coffee and building a hacienda, you stab people in the face and steal their drugs.

I can't be the only person disappointed that a game this good has a theme this objectionable. I really hope the guy who made this game decides to make another one. Maybe for his next game, he can make a trick-taking card game about a terminal cancer ward, or a kid's game about African genocide. If he does, they'll probably be really fun, if you can bring yourself to play them.

Which is about how I feel about San Quentin Kings - boy, this is a fun game. Too bad it's about prison.

Pros:
Very quick game play keeps the action moving
Intuitive rules make sense pretty much as soon as you start playing
Excellent balance of short-term reward versus long-term payoff
Way more fun than it ought to be

Cons:
The art is not just weak, it's flat-out bad
It's about prison

I was so going to link to a picture of a Mexican border jail, but I can't because San Quentin Kings is a really good game. If you don't mind the theme, and if you're not overly concerned with physical appearance, you really ought to try this game:
http://www.ngwtt.com/sanquen.htm
Posted by Matt Drake at 11:30 PM