Board Game Review - Hour of Glory 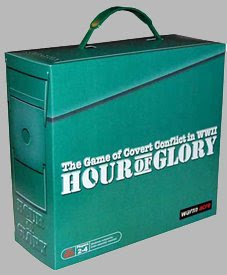 Way back in the old knight days, there were these priests who would walk around with whips and beat the crap out their own backs. They also wore a lot of black, which is why these were called the Dark Ages. These priests were doing this crazy stuff with the whips and the backs and the black clothes in the middle of a hot summer because they were really sorry about the bad things they had done (though their bad things were not all that impressive compared to, say, the Spanish Inquisition, which I understand was one of the causes of the Great Depression).

Those priests have recently been an inspiration to me, because I'm really sorry about something I did. Only I don't have a whip, so instead I've been sitting in a really uncomfortable chair, and occasionally skipping dessert.

See, about a year ago, I asked Warm Acre Games if I could review Hour of Glory, their game of espionage and sneaking and shooting Nazis. And they were very excited, and sent it to me, along with some of their metal miniatures that they make specifically for playing this game. And then the mail lost it, so they sent another one (but this time without miniatures. Damned mail).

And then I didn't review it. It's been like a year. They paid postage from Britain to Texas - twice. They sent me a copy of a game that had to have been expensive to print and package (the rulebook is chock-full of color illustrations and diagrams) and I just never played it. For about a year. By now, they have to be wondering if I ever will. They've probably written me off completely - and who could blame them? It's been a year!

Happily, they're still in business, and more happily, they've even released another game. And best of all, I've played the game, and now I'm reviewing it. Maybe the fact that I have about ten times as many readers as I did a year ago will make up for the fact that I sat on the game for an unconscionably long time. In case it doesn't, I've also taken to wearing a pair of underpants that's just a little too small.

One of the reasons I didn't play Hour of Glory sooner was that I didn't really understand the rules. I read them, and while they're mostly straightforward, they're also spread out all over this 40 page manual. Hell, I read them three times, because every time I decided I was going to By God play it this time, I had to read them again. And I still made a ton of mistakes the first time I played.

Another problem might have been the pieces in the box. The box itself is cool - it looks like a little foot locker - but the cardboard in the box is drab at best. The room tiles are kind of boring. The counters for the game are printed on card stock and perforated, and I tore several of them punching them out (I would have used the minis, but those were in the first box. The one the mail ate). The art is not very impressive, and the worst thing is that the little standup men don't stay in their stands unless you glue them in place. I was just not inspired by the appearance of the game, but that is absolutely no excuse to avoid reviewing a game for nearly a year. I feel so bad that I've started using very affordable toilet paper.

But the worst punishment for me is to play the game - not because it's bad, but because it's absolutely a blast. I missed out on all this fun for months, and it's all due to my own bias toward nifty pieces. I feel so dumb for having deprived myself of this awesome game for so long. And so guilty, too. That's why I've started eating my ice cream without any caramel topping.

In Hour of Glory, one player is the Nazis, and the other person plays up to three Allied spies sneaking around in the secret German base and stealing sensitive equipment. The Nazis really can't do a whole lot most of the time, because most of their guys are sentries who never move (until an American spy sneaks up and stabs them in their sensitive parts). They do have a commandant, but I swear he's Colonel Klink, because he moves slower than Christmas and tends to be almost completely ineffective at anything but asking the sentries for directions.

The spies should definitely have the edge. They're better fighters, better spies, they sneak around, they can hide right out in plain sight, and they're all-around bad-asses. The sentries appear to be retarded kids who got lost on the way to the zoo. But the Germans have a few tricks.

For one thing, once a few sentries start to hear odd footfalls, or if they get killed and leave messy bloodstains, the commandant gets a little worried. When the Nazi player thinks he has enough to warrant it, he can sound the alarm and summon guards. Where the sentries stand around and offer their bodies as target practice, the guards run around the base firing guns and yelling at each other. It's a little like a family reunion in East Texas. The guards can find the spies and perforate them, assuming they don't wind up catching a few bullets to the face (which happens pretty regularly).

The greatest trick the Nazis can break out, though, is the timer. The spies have just one hour to collect enough intelligence to win the game, and if the clock runs out first, every guard post for fifty miles is going to descend on the base like a flock of vultures, and those spies are going to spend the rest of the war in a basement in Berlin wearing blindfolds and jumper cables.

The Allies can sneak around, probably evading detection for most of the game, but they're really limited in sneaky mode. They can't fire a gun, or run, or even chew loudly. If they're spotted, they can't sneak any more, and when they start shooting, they'll alert tons of sentries, and then the commander is going to be able to bring is more guards than that scene at the end of Blues Brothers.

For nearly any action in the game, the spies have two options - risk it with a die roll, or take the time to do it right. The die roll might fail, but uses no time. Taking time could take a couple minutes, but it's guaranteed to succeed. So the spies have to decide - play it safe and try to get out before the clock kills them all, or take their chances and run like hell?

In the end, it comes down to a little of both. With the clock rapidly ticking downward, bodies piling up like credit card offers, and bullets flying every direction, the Allied player is going to be hard-pressed to get out before he runs out of time. The end of the game is tense and exciting. We were literally standing up and using what cannot possibly be described as inside voices as the spies, intel in hand, ran for the door. There was shooting and falling and stabbing and more than a little cursing, and then, with just minutes to spare, they managed to shoot down the commander and slip past his guards, escaping into the night just as the massive doors swung closed.

I simply cannot recommend Hour of Glory highly enough. It's got ugly cards, irritating cardboard standups, and long and involved rules. But when you set it up and play a game, you won't care if it's pretty. You'll be too excited to notice.

And it gets even better. If you ever get tired of storming the stronghold, stealing the intel and shooting the bad guys, you can download three episodes of the free webzine from the Hour of Glory website. This will let you add guard dogs, stormtroopers, and even a fourth spy (she's hot. All girl spies are hot). You can even see how you could build a three-dimensional stronghold and make what is currently a visually bland game into a gorgeous tabletop extravaganza.

Now if you'll excuse me, I need to go watch some television, and not skip through the commercials even though they're recorded.

Pros:
Deep opposing strategies
Tough balance of speed and stealth
Lots of options for both sides
Insanely fun, with an exciting finish that will keep you coming back
Killer expandability and online support (FFG could take some notes)

Cons:
Bland and unattractive right out of the box
Rules may take a few reads to grasp

Please, please order yourself a copy of Hour of Glory. It'll make me feel a lot better, and maybe I can quit drinking Rice Dream and go back to milk. Plus now you can get it with all the minis! Get it right here:
http://www.warmacre.com/webpages/shop/shophogset001UK.htm
Posted by Matt Drake at 7:17 PM

Thank you for an interesting review! It is so refreshing to see an actual board game released as new, exciting product. With so many (great) computer games out there, I have long feared (traditionalist that I am) that the death knell of board games has already sounded. I still think the social aspects of a good, old-fashioned tabletop game remain unmatched by their electronic counterparts (so many of which involve players on their own). I fully intend to check out this game. WWII espionage buffs might want to check out my new novel, The Fuhrer Virus. It is a fictional spy/conspiracy/thriller for adolescent/adult readers and can be found at www.eloquentbooks.com/TheFuhrerVirus.html, www.amazon.com, and www.barnesandnoble.com.

HI,
Interesting review. I like this game. Thanks for posting this blog.

Thanks for this review. I wasn't sure if I would buy this game, now it's garanteed. And I laugh myself out with your self-punishment.