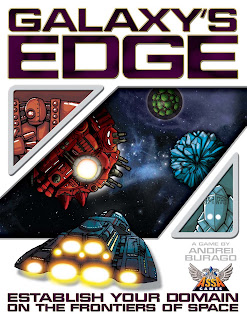 When I read that Assa Games was coming out with a new game, I felt like running around yelling, 'The new phonebook is here! The new phonebook is here!' and then inventing the Opti-Grab until everyone sues me for making them crosseyed (if you didn't understand that at all, go watch The Jerk. If you haven't seen The Jerk, go watch The Jerk. I'll wait here).

Up until now, Assa Games has had one game on the books, called Conquest of the Fallen Lands. I liked it a lot, and have wondered for years why these guys would make one great game and then rest on their laurels. Turns out, it just takes them a really long time to make their genius magic work. And thankfully, the wait is over. In just a couple months, you'll be able to get your mitts on Galaxy's Edge, the long-awaited second game from Assa Games. I was so excited, I spent all my Geek Gold (if you don't know what that is, you're probably better off) on nabbing an advance copy, then played it with my playtest group this weekend.

And it's just as awesome as I had hoped it would be. The pieces are far nicer than those in Conquest, and you don't have to mess around with a bunch of cards. The art is great. The big chunky hexes that make up the game board are easy to read and lay out. There are also little wooden space ships, which I must say totally kick ass.

Like Conquest of the Fallen Lands, Galaxy's Edge features a board made randomly from hexes. Each hex represents a different star system, and each system has planets in it (except for the ones that only have one planet. Those only have one). Each planet has a value from 1 to 9, which is how many points you get if you can hold onto that planet until the game is over. If it's a 9, that's pretty hard, in case you were wondering.

Every system has already been settled by an alien race way before you get there. There are tree people and bug people and robot people and crystal people and people people. When you colonize their regions, these aliens start to make friends with you, and different aliens provide different scoring bonuses at the end of the game. So you might get to be friends with the Wargers, who are some really unpleasant robot dudes who love bloodletting and reward you if you have the most military bases at the end of the game. On the other hand, maybe you get in good with the Saplenti, who are peace-loving hippie tree-huggers - well, OK, trees - and they reward you if you have the fewest war bases. The Humanoids just want everyone to get along, and give you points if you share a system with a bunch of other players. But here's the thing - you only get the bonus for an alien species if that species likes you best.

You can grab those loyalties by building colonies in the alien systems - but if you want to keep them, you're probably going to want some military bases. Only colonies get you points, but without bases, you might not be able to hang onto your colonies. And only colonies count toward making best buds with the big bugs, so you have to carefully balance colonies and military bases. Or just play a lot better than I did, because I got completely destroyed.

To explore this burgeoning galaxy, you're going to fly around the board in your wooden spaceship, and maybe (if you get the chance) draw and play some cool event cards. Or you might just put interstellar bans on the area you're in, in which case you'll have to leave before you can do anything interesting. Apparently there's some kind of galactic zoning committee that decides you can't pave over Saturn. Damned hippies.

So those are sort of the rules - but what's important is how the game plays. There is a ton of strategic placement, reinforcing important areas, balancing expansion with defense, and a whole bunch of really nifty little wood pieces. Strategies can shift during the game, and until you play it a couple times, you won't even begin to understand how many different ways there are to win. Maybe you try for military dominance - but you could still lose to the diplomats who make lots of friends. Or maybe you just try to spread yourself all over the place, and lose to the mining superpower that snags all the cheap spots nobody else wanted just to score big with the Crystalloids.

Now, if you're thinking this is your standard galaxy takeover game, think again. Galaxy's Edge teeters on the edge of being a Euro game. Hell, it might even be one, but the line defining Euro games is blurring all the time, and since you can trash an opponent's colony with a surprise attack, you've at least got some potential body count, which doesn't happen a lot in Euro-style games. This isn't a game about starting fights and killing people, though. It's about controlling important areas and influencing the rest. It's actually a little abstract, in fact - I'm not entirely convinced that the theme here was completely required, but it's damned fun anyway.

Cons:
Theme is a tad weak
May induce Too Much Thinking syndrome, forcing you to beat your friend with a rubber mallet

You can't get Galaxy's Edge at Dogstar Games, unfortunately. But then, you can't get it anywhere, so I guess we can't really hold that against them. All you can do is go here and keep an eye out for it:
http://www.assagames.com/galaxys_edge.htm
Posted by Matt Drake at 9:48 PM

This game looks so so cool, COTHFL was incredible, I will so be buying a few of these.

Thanks for spending your GG wisely, I never saw this up for sale?

It was one of those auctions where you can bid your gold for stuff. I only ever bid on games (well, that's not entirely true - I also got a cool Batman graphic novel one time). But it'll be a while before I buy more - I won the auction for Galaxy's Edge, but it left me with one gold.