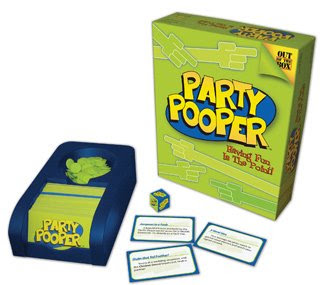 It should come as no surprise to regular readers of this site that I intend to mercilessly mock the subject of this review. In case you're new, though, I'll let you in on a little secret - I'm a big fan of crude humor. And when the title of the game I'm reviewing actually contains the word 'poop', all bets are off.

What makes it even easier to make toilet jokes about Party Pooper is the fact that is a completely mediocre party game with almost nothing of interest to offer. This is a case of truth in advertising - the game will truly take a steaming crap all over any party at which it makes an appearance.

The game is pretty simple - there are a bunch of cards describing situations, and a die that says either 'party pooper' or 'party animal.' One person rolls the die, reads the situation, and decides which person at the party best fits the description. Everyone else guesses who that person chose. Guess the same as the host for that round, and you get points.

A few examples might help. A card might say, 'your teenage daughter wants to get her navel pierced, and needs your consent.' Then the host for the round rolls, and is picking out the party animal who would let his teenager get a chunk of metal pushed through her belly button. Everyone guesses, and points are given out for matching the host. Then the next person takes the cards and becomes the host for a turn.

How about another example? A card might say, 'your cousin with the head injury wants to ruin your party by taking a dump in the living room and then playing Party Pooper.' Then the die says, 'party pooper', and you have to guess which of your sane family members or friends would be smart enough to say, 'the turd on the carpet might be funny, but for God's sake don't let us play Party Pooper.'

I don't know what Out of the Box was thinking when they named this game. I've rarely seen a game whose title was more appropriate. This is a boring, run-of-the-mill, unimaginative party game. If it was literally poop, its literal odor would match its figurative stink.

A lot of people took issue with me disliking Apples to Apples (though I still think that's a dumb game). Well, compared to Party Pooper, Apples to Apples is party game genius. I just cannot believe anyone continues to churn out these crappy, mundane, boring party games. I suppose they must sell pretty well, or sooner or later some executive would say, 'hey, our last five crappy party games went into the toilet. Maybe we should try making games that don't suck.'

I don't hate party games, I swear. There are several that I love to break out from time to time. They're easy and fun and can lighten up a room and make a party come to life. In fact, just so that I can prove I don't hate party games (in case anyone thinks I'm a liar, which is possible, since I very well might be) here are a few I highly recommend:

So don't waste your ducats on Party Pooper. If you really think you need poop at your party, just invite that brain-damaged cousin to crap in your living room. That's got to be more entertaining.

If you really want to play Party Pooper, you might enjoy playing with this guy:
http://www.youtube.com/watch?v=goBIe5rjX58
Posted by Matt Drake at 7:35 PM