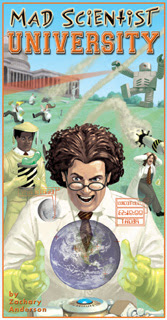 It's hard to review Mad Scientist University sober. But then, I don't write very well drunk, so I'm stuck in a quandary - sound as insane as the game, or sound intelligent and have trouble conveying the madness? Of course, I'm probably giving myself altogether too much credit - I doubt I sound very intelligent either way, so I'll just save the Johnny Walker for after I finish.

This wacky game from Atlas Games is really easy to explain. There's a big stack of unstable element cards, and a stack of insane assignment cards. Everyone gets an unstable element, an insane assignment is chosen, and then everyone figures out how to complete the assignment with their different elements. Then one guy (who didn't get to play that round) judges which plan is his favorite. Do a few rounds of this, and the person with the most 'favorite' votes wins.

The part that's tough to explain - and the reason I think I would actually make more sense if I had been drinking - is the seriously insane results. For instance, when the assignment was 'Write your name on the moon,' one player used an army of lawn gnomes to take over NASA. In order to kill all the insects, another player wrapped a giant statue of his head in explosive, time-release, poison bubble wrap.

The madness of Mad Scientist University really comes from several sources. These are:

1) The cards. There are hundreds of elements, from anti-depressants and cardboard to ninjas and plastic flamingos. The insane assignments range from the mundane (find on-campus parking) to the absurd (destroy the moon). So when you have a player using squirrels to solve the energy crisis, there's some wackiness on the hoof.

2) The players. If your players are too literal, or if they're boring, or if they lack imagination, you're hosed. But if they're willing to get pretty crazy, you can hear really wild stories of how you could use sombreros to trigger devastating world-wide floods. The zanier the players, the more fun this game will be - but beware the player who cries, 'that's stupid!' He is clearly not prepared to enjoy himself.

3) Strong drink. I cannot emphasize enough how much better this game could be after several rounds of sex on the beach (and then maybe some drinks - ba dum dum!). In fact, while I encourage you to keep off drugs (Nancy Reagan wants you to Just Say No), I can really see a place for this game if you're all enjoying a little herbal remedy. I can't verify the playability of the game stoned - I'm a gamer nerd, I'm scared of drugs - but I can only begin to imagine the Wizard-of-Oz-meets-Pink-Floyd bizarre that would result in the combination of Mad Scientist University and a loaded bong.

If you're looking for a game you can win, this isn't it. It really doesn't matter who wins. You just want to hear the mad-cap stories. You want to hear how a guy is going to use giant cucumbers to develop the uncommon cold. You want to see a player flail trying to explain how bongo drums are going to help him make his lab partners pull their weight. Win or lose, the fun is in playing - which is how good games should be.

If there was ever a game that begged for variants, this is it. Play with a dozen people broken out into two-player teams, and everyone has to combine elements. If you thought it was fun to see how you would use earwax to win the election, just wait until you hear how it would work if you had to use rubber chickens and bubble gum! Or you might just give each player three elements, and instead of having a judge, let everyone play and vote, but you can't vote for yourself. There are lots of ways to enjoy this nutty little game.

There is a lot to love about Mad Scientist University. It doesn't pretend to be more than it is - there are no complicated rules, no strategy, and nothing to ensure fairness. It's easy to break out and enjoy for twenty minutes, or you could spend hours playing while you wait for everyone to get sober enough to drive. It requires a pretty silly mindset, and you can't play with an anal-retentive nerd, but if you can just ride your buzz and get silly, this can be a whole lot of fun.

Cons:
Not as much of a game as a story-telling group activity

Mad Scientist University is cheap and fun at parties, like the perfect college date.
http://www.funagain.com/control/product/~product_id=018415
Posted by Matt Drake at 8:39 PM