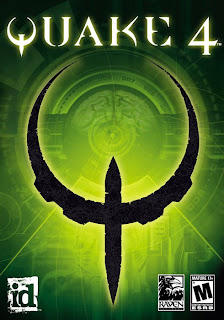 OK, so I still don't have GTA 4. I can hardly stand it. Instead of playing as a lowlife bad guy, I've been playing as a soldier in the never-ending battle against the Strogg (never-ending, that is, as long as the series continues to be profitable). So here's a little review of Quake 4. And in case you hate suspense, I'll spill the beans - it sucks.

At first glance, Quake 4 seems to be a near-perfect shooter. The controls are tight, there are lots of good weapons, and the graphics are magnificent. The bad guys look scary and the marines look tough. But then you notice that there's no melee attack, and after years of playing Halo, I love me some melee. And then you go to turn off that annoying walking camera wobble that game designers seem to think makes their games more authentic, but that really makes you want to throw up, and you find out you're stuck with it. And then you get in a crazy firefight in a hallway and find out some halfwit contractor put a bottomless pit in the corner, which you find because you dodge behind a pillar and wind up falling to your death.

And I know we're not supposed to get maps in shooters any more, but if you're not going to give me a map, how about you don't make every hallway the same? Yeah, they're all pretty, but they're all too similar. There's no way to say, 'wait, I've been here.' And sometimes you get missions, but you have no idea where to go, and there are no hints. This is a shooter, not a damned puzzle game - and the puzzle really sucks if the answer to 'open the door' is 'hop on these three boxes so you can fall through the roof.' I spent as much time wandering around empty corridors as I did shooting the bad guys who were there in the first place.

The real problem with the game - the one that broke it for me - is the holes I mentioned before. Apparently, OSHA has no authority on Strogg World. The buildings must be made by some of the worst contractors in the universe, because these stupid aliens build their entire complexes on top of yawning chasms, and then don't put up railings. The Department of Labor would prosecute these retards into bankruptcy - there are holes in completely illogical places that are completely unsafe for working Strogg. I would end up falling into holes where there was no reason to expect them. Here's a hint, id guys - if you're going to riddle the entire game with holes that are completely fatal, let me see my feet. I'm not playing a platformer, and this asinine hole thing ruined my day so many times, it's a miracle I finished the game.

In fact, I think I only finished the game because I played on easy. I wanted a game where I could just blow stuff up. You know how you get that urge to just blast the ever-lovin' crap out of everything you see? That's what I had in mind. What I hadn't counted on finding was a scattered handful of weak-ass Strogg who thought that the best defense was a hell of a lot of holes in dumb places. I should have just run down a copy of Serious Sam.

It seems sad to me that the people who basically pioneered the first-person shooter made Quake 4. Hell in a bag, man, these guys made Doom! I still love to play Doom! They made Quake, and practically invented LAN parties! They're the old-school kings of the shooter, and now they've resorted to making crappy platformers with no option for punching bad guys in the eye. I don't know if Carmack retired or what, but after Doom 3 and Quake 4, I think maybe these cats need a new gimmick. They obviously still have the technical know-how to make good games - the controls in Quake 4 are fantastic - but they've apparently kept their head in the ground for so long that they don't realize what it takes to compete with modern games. Sorry, id, but Halo 3 is way, way better for a very good reason. Hell, it's good for lots of reasons - duel wielding, melee, weapon variety, awesome multiplayer, great (and intuitive) vehicles, and a solid story, just for starters.

To address a few of those points as they relate to Quake 4, here's a little summary. There are lots of cool weapons, but I never did figure out why too many Strogg would shoot at me, and then die, and then there's no gun on the ground. Were they just spitting at me? And I tried to find some multiplayer, but was, as far as I could tell, the only person in the world playing Quake 4. The vehicles sucked. They were clunky and slow and hard to drive. The story has one interesting part, and then the rest of the time, it's just 'now go kill some stuff.'

I'm not sorry I played Quake 4. I had a reasonably good time. But I'm not sad that it's over, either. I won't be putting that one back in the 360. I'm still holding out for GTA 4.

Cons:
Lack of direction leads to hours spent wandering aimlessly
Lame story
Nobody on multiplayer (probably because the game sucked)
Lots and lots and lots of really stupid holes

Don't buy Quake 4, even if it's on sale. There are better shooters out there that cost less. There's no link. Just don't get it.
Posted by Matt Drake at 4:02 PM