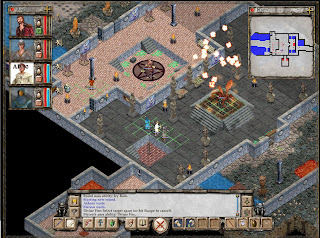 I got an iPad for my birthday. Or, more accurately, I bought myself an iPad for my birthday, and got one for my dad so we could play games even though he lives halfway across the country from me. And while I have really enjoyed many of the games we've been playing, I'm not writing tonight to tell you about any of them. I want to tell you about Avernum: Escape from the Pit, which is simply spectacular, but decidedly single-player.

If you've been around a while, you may already be familiar with Spiderweb Software. They make arguably the best indie RPGs available on your computer, and have been doing it for almost 20 years. They don't try to blow your mind with sexy graphics and amazing cut scenes, they don't trim out their games with gallons of extra crap meant to get their price tags to sixty clams, and they don't have a huge budget for sound effects. What they have is some of the absolute finest computer role-playing games you'll ever play.

Many of you have probably played Baldur's Gate. I fondly remember the first time I played through that classic game. I remember the time I was at a party, celebrating with some people I barely knew, and left early because I wanted to go clear out the thieves' guild in Waterdeep and get a level for my main hero, a ranger names Xerxes (yes, I'm an unoriginal bastard, and a nerd, and an antisocial loser - I might just as well have gone back to my mom's basement, except that I was paying the mortgage and my mom lives in California). I still have Baldur's Gate on my computer, having had to install it over and over on the last four computers I owned, but I don't go back to it. Instead, I just check with Spiderweb Software and play their most recent Avernum game.

Only this time, I'm not playing Avernum on my computer. I'm playing it on my iPad, and I'm here to tell you it's just as good as it ever was on my PC. My party of exiles was thrown into the prison caves of Avernum, just like all the exiles before them, and they're happily brawling their way across the dungeons and caverns of this underground domain. I've met with dragons, banished undead, battled bandits and slain evil cat-people. And after all that, I'm not even a quarter of the way through the game.

Most of the games I have on my iPad are kind of weak. Apparently, developers are just starting to figure out that they're allowed to put serious games on a mobile device, and we're not all huge fans of Angry Birds or Fruit Ninja, possibly because some of us are no longer eight years old. I download them, play for a month or two, and put them down again. There are some really good ones, to be fair, but none of them can hold a candle to the pure tactical adventure I get out of Avernum. I have played more computer RPGs than I can count, and Avernum can hold its own against the best of them.

If you look at Avernum, or any of the other games from Spiderweb Software, you may be initially underwhelmed. And even if you're not actually underwhelmed, you may be simply whelmed. The graphics are whelming, if you're being generous. There are no 3D graphics. The dragons are visually unimpressive. The fighters are all basically static sprites, with a brief animation of a waving arm when you swing a sword. And when you try the demo, you'll find out that there's virtually no reason to bother turning on the volume, because the music and sound effects aren't even whelming. They're just underwhelming.

But if you judge this book by its cover, you're missing out on one of the greatest adventure games you can buy, not just for your iPad, but for any platform, period. It's bigger than Skyrim. It's more exciting than Fallout 3. It's more fun than GTA4, and it's more tactical than all of those games put together. Granted, I am a huge fan of turn-based tactical RPGs, but you don't have to be a tactical snob to enjoy Avernum. You just have to enjoy roaming an enormous, challenging underworld, meeting all manner of people and creatures, hurling spells, wielding magical swords, battling ancient evil and growing into the greatest warriors the underworld has even known.

Let's pretend you don't own an iPad, maybe because you're not a mindless follower of the cult of Apple like me (although in all fairness, the iPad is the only Apple gadget I own, and I just got it because the software selection is awesome). You can still enjoy the great stuff from Spiderweb Software on whatever you're using to read this review, unless you read Drake's Flames on your phone, or your work computer, because work might be pissed if you spend the whole day killing bandits instead of finishing the TPS report. The game is available on PC and Mac on top of being the best RPG on the iPad, so unless you're a homeless guy who reads my site at the Internet cafe where you spend your day so you can get some sleep without getting rolled by roving teenagers, Spiderweb Software has your hookup.

Still not convinced? That's fair. Not everyone will be. Not everyone loves an excellent turn-based RPG with incredible adventures and an exciting, consistent setting. Not everyone can get behind a finely tuned story and a plot that doesn't drag you around by the scrotum. So if you're skeptical, and I don't blame you if you are, go over to the Spiderweb Software website and download the rather gigantic demo of Avernum. Give it a whirl, because I think you're going to love it. If you don't, you don't have to pay for it, and you still won't have anything to complain about, unless you really are that homeless guy, and then I think not being able to play computer demos is the least of your worries.

Oh, I almost forgot - you may want to play this one with a stylus. Some of the little spots can be tough to nail with your finger.
Posted by Matt Drake at 6:54 PM

Rocking awesome! I'll have to give it a try, I love the "old school" turn based rpgs.

I love when new games actually channel the feel of the great older games.

What are some of the other games you mentioned that you've been enjoying with your dad?

I've been playing a bunch of games. My dad and I like Hero Academy and Battle Academy (no relation). I play Ascension with my friend, and I played Summoner Wars until the stupid Playdek servers ate every single game I had going.

Sorry for commenting this late on this thread. Have you tried Small World on iPad? Total War Battles: Shogun?

Even better, for a proper fantasy wargame experience: Battle for Wesnoth? (free on PC/Mac/Linux) Extremely well designed, with 6 fienly balanced factions, huge campaigns and lots of UMC. Try it out!