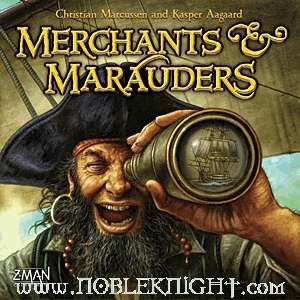 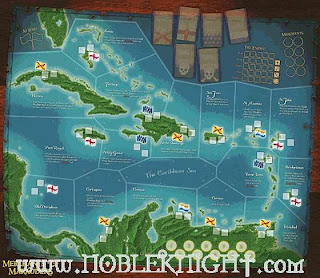 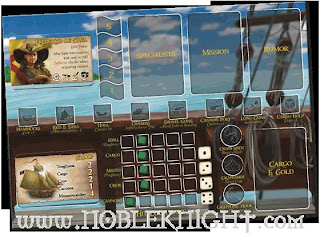 I started writing my review of Merchants & Marauders last night, and realized that I would have to be a much better writer than I actually am if I wanted to make this game sound like it was as fun as I found it to be. So I scrapped it and started over, though I'm not sure why I bothered, having already thrown in the towel and decided the task was beyond my level of expertise.

The problem is that when I start telling you about the game, you're going to think Merchants & Marauders is slightly less retarded than a brain-damaged lab rat chewing on the plastic pawns from Candyland. 'Ooh,' I'll say, 'you can buy stuff in one port and then go to another port and… wait for it… sell it!' And you'll think I'm an idiot.

Or I'll tell you how you can turn pirate and raid merchant ships, and the raid is summarized by drawing three cards and seeing if your victim escaped or if he just shot some holes in your dinghy. And if you win the fight with the merchant, you will get some money and some cargo and you can take that cargo to a port, where you can… wait for it… sell it! I know, I sound like an idiot.

It's fun, I swear. It sounds like a game about running a business, but instead of doing all this competitive bidding and screwing opponents out of great contracts, you just handle the accounting and order office supplies. But it's not that game at all, because you have pirates. And you can be pirates. And you can die.

Oh, yes! I did forget to mention that, didn't I? Yeah, your pirate can totally croak. You can have your ship shot out from under you and find yourself tits up in Davy Jones' locker (which is stinky, because he was in the Monkees and girls used to give him used undergarments and he kept them in his locker). You can get stabbed to death by enemy pirates, be hanged by Dutch naval officers, or be forced to walk the plank by the other players at the table. Yep, the other people playing the game can kill you. If you want interaction in your board games, it really doesn't get any better than killing the other players (not literally, of course, unless some nimrod spills a beer on the board, and then no jury would convict you).

In fact, the better you do, the higher the odds get that someone will want to kill you. A really successful pirate will be wanted by the nations he has offended, and those nations will pay a whole buttload of money to anyone that can bring down the scurvy raccoon who keeps stealing all their silk pajama pants. If you're a crazy good pirate, the other players are going to have very good reasons to try to hurt you and keep you from winning, especially because if you are a really good pirate, you've probably got some great stuff worth stealing.

You don't have to get all piratical to play Merchants & Marauders. You can be an honest merchant plying the Caribbean, trading sugar in Port Royal and cacao in Havana and slaves in… oh, no wait, that's still distasteful. We don't want to be that historically accurate. Let's just stick with exploitation of the locals and murder of innocents.

However, just because you don't have to be a pirate, that doesn't mean there's not a good reason to give it a shot anyway. It's easy to knock off some poor floating treasure barge and make off with all their tobacco. Plus, if you do, there's a really good chance that the French navy will send all its ships to come get you, and they'll blow big holes in your boat and you can shoot back at them and you can both swing over to the other ship on ropes hanging from the snarled rigging, and then you can each realize that the enemy is on the other ship and swing back, but then the other guys are swinging back, and the whole episode looks like one of those hilarious Scooby Doo sketches where the heroes run in different doors on either side of a long hallway and the bad guy never catches up to them.

It wouldn't seem like there are many different things to do in Merchants & Marauders, but pirating and trading aren't the whole deal. You can upgrade your ship with better sails and cannons, you can hang out in bars and listen for rumors, you can lead the English frigate to the pirate hideout, or you can battle dangerous pirates on the open seas. And you can swash all these buckles on a stunningly attractive board with fantastic plastic ships and beautifully illustrated cards. And even though I know this sounds like it wouldn't be very much fun, Merchants & Marauders is probably the best pirate game I've ever played.

And the reason I really liked Merchants & Marauders is that while it lacked crazy depth or difficult decisions, it felt like I was a freebooting privateer in the Golden Age of Piracy. I was Henry Morgan and Bartholomew Roberts, alternating between bloodthirsty raids and legitimate business ventures. I scraped my hull in the shallows, sheltered in port during a storm, and braved angry Spaniards who wanted to stretch my neck. I covered myself in glory and gold, and if I had been a real pirate, you would be reading about me today. Probably you would also read about how I got butt lice and died too fat to get out of my bed, but the pirate I played in Merchants & Marauders was practically a historical figure. And I say 'practically,' because it was just a game. Real pirates marched across Panama to raid cities on the Pacific, and I didn't get to do that.

I'm offering that qualification because although I did enjoy Merchants & Marauders, I don't know that I'm going to play it another fifty times. I won't be getting rid of it soon, but it just didn't have the epic punch or brain-steaming strategy that I usually like when I play a game. It was fun, and at times exciting, but if I never got to play it again, I would kind of shrug and say, 'meh, I'll live.' Compare that to some of my actual favorites, where if you said I couldn't play them again, I would kick you in the dingus.

If you're looking for a great pirate game that captures the feel of the days of swashbuckling danger on the high seas, Merchants & Marauders can deliver. It doesn't have a ton of depth, but that's OK because it's more about playing out the story of being a disreputable businessman in a time when laws were more like rules of thumb and brazen men made their own fortunes at the end of a sword. Or they bought stuff in one port, when to another port, and then… wait for it… sold it.

Pros:
Be a pirate! Or a merchant! Or a merchant-slash-pirate! It's an adventure however you do it.
Absolutely fantastic art and pieces
Enough strategy to be worth playing twice

Cons:
A little shallow, but still enough meat to be satisfying

If you want a good pirate game, I think you would be hard-pressed to do much better than Merchants & Marauders. You can get it from Noble Knight Games:
ARR BLOW ME DOWN
Posted by Matt Drake at 7:33 PM

Libertalia isn't really a pirate game. It's more like a clever card game with a huge body count. You don't pillage or set sail or anything, you just play cards. It is very fun, but not swashbuckley or adventurey.