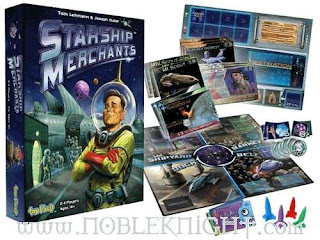 When you see a game called Starship Merchants in today's market, you are most likely to believe that this is one of those games where you build ships and explore planets and conquer enemies and have political battles in the senate where Jar-Jar Binks is responsible for the fall of the Republic because, unbelievably, somebody took the goofiest dingbat in the entire Star Wars universe and said, 'man, you know what this comic-relief halfwit would do best? Politics!' Maybe they thought he looked like Lyndon LaRouche.

But it's not one of those games. It's an exercise in economics, supply and demand, and business planning. It has more in common with a Euro about a bunch of Spaniards trading across the Atlantic (you know, the ones where we conveniently ignore that slaves were a high-yield crop and pretend all anybody wanted was coffee beans and sugar). You'll hire ships, trick them out with killer upgrades, then mine minerals that look like french fries out of an asteroid belt. It's one of those games where making a bunch of money is the ultimate goal, and where you'll spend all your money every turn so that next turn you can make more money, which you will, in turn, spend all in one turn.

It's a very interesting game with loads of critical decision points. You can blow all your dough on buying a ship outright, or you can buy on credit and pay it back later, along with some rather painful interest. But if you spend everything, you might not have any money left for a pilot or a survey computer, and then the guy with the debt can scoop you for the best space ice cubes. You might buy a refinery, and hope it pays off long-term, and then find out that you can't afford the three extra bucks that would let you pick up a new ship and carry even more purple paintballs.

There's even a little luck, because when you do get out to the asteroid belt and want to see what's available, you're pulling cardboard squares out of a cloth bag. Get the really great squares, and you'll make a ton of money. Get the crappy ones, and you'll make... slightly less money. There is luck, but it's not much luck, and so this is still a game that hinges almost exclusively on making the right decision at the right time.

What it is not is very interactive. Whether you buy the best ship or not is irrelevant to the guy behind you, unless when you bought the best ship, he couldn't get one. He also doesn't care if you get the best space rocks unless he also wanted those exact space rocks. There is some opportunity to mess with the other players, like if you get the new model spaceship and make the old model obsolete, leaving your opponents with ships that aren't worth the paint on the hull. But for the most part, you could play this game solo, except that then you wouldn't know if you won.

I did really enjoy Starship Merchants. Toy Vault is starting to impress me with some pretty decent games - between Abaddon and this one, we've got some pretty darn cool games coming out of this company that used to just make fuzzy Cthulhu stuffed animals, which are perfect if you're a horribly maladjusted parent who tells his kids Lovecraft stories at bedtime. All these successes have me excited for Apparatus, the next game from Toy Vault, and I'm even considering picking up a pair of stuffed zombie-face slippers for my daughter.


If you're a fan of games where people die, Starship Merchants is going to leave you wondering if you couldn't have more fun playing Barbies with your friend's four-year-old niece. There will be the same amount of violence, unless your buddy's niece is a little unhinged. It's very much a game about running a business, making efficient decisions, and spending just the right money at just the right time. If you're bored by games that feel like you're managing a fast-food chain, you're not going to like this one.

But if you're the kind of person who enjoys the kinds of games that come out of Germany, where it is actually illegal to make games where people get killed (unless they die of old age, sleeping peacefully in their beds, and the game abstracts it by saying 'discard one family token from the hovel, because Grandpa was hungry and you couldn't bring yourself to kill the family cow for a couple of flank steaks'), you might really enjoy Starship Merchants. It has a few painful rules oversights, like not mentioning what happens when a player can't buy a new ship and loses his old one because the space fins fall off, but by finding workarounds and making up a few rules while we were playing, we got around these problems and had a very good time.

Pros:
Very smart game with lots of good decisions and planning
Good management without feeling too much like work
Engaging and tricky, and even when you're far behind, there's still fun stuff to do

Cons:
Not much in the way of interaction
Some rather glaring rules oversights

If Starship Merchants sounds like your kind of good time, get yourself over to Noble Knight Games and get a copy, and even save a little money on it:
GET PAID IN SPACE
Posted by Matt Drake at 11:11 PM