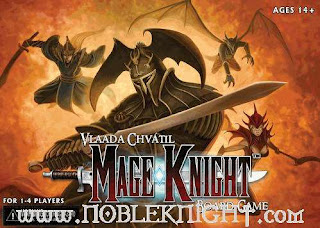 I hate feeling unprepared to review a game. It doesn't happen very often, because usually if I am not ready to write a review, I just go back and play it again. But in the case of the Mage Knight board game, I've already put five hours into it, and I'm not really of a mind to sink another afternoon into making sure I understand what I'm writing about. So fair warning, some of this will almost certainly be wrong, but since I expect my experience will be pretty close to yours, I'm going to jump in and look like an asshole anyway.

I was incredibly excited to try Mage Knight. It has garnered incredible press, and it's always sold out. It's like the damned thing is made out of gold bullion and coupons for sex. Everybody talks about how it's this incredibly awesome game, and plus it's an adventure game where you wander around and kill stuff and get magic powers, so that's right up my alley.

However, I suspect that some of those reviewers fell into a common trap, one which I studiously attempt to avoid:

1. Read popular reviewer who says he loves the game.
2. Play the game and be confused as to why it's so great.
3. Go back and read the reviews, certain that you missed something.
4. Assume that someone must know something you don't.
5. Question own sanity.
6. Write a positive review because everybody seems to like the game so much.

My main method for avoiding this potential pitfall combines ignorance and arrogance. First, I try not to find out what other people are thinking, and second, I just decide that I am right and all those other people are wrong. It's what works for me. The end result is that my reviews tend to be crassly opinionated, but I warn you of that right at the top of the page, so mea culpa, bitches.

So my review of the Mage Knight board game is NOT going to be overwhelmingly positive, because I am not all that crazy about it, and don't see why everybody loves it. But I am also going to admit that I have only played it once, so I may have missed something.

For my first complaint, I will address the byzantine and monolithic rulebooks. Yes, rulebooks, plural, because there are two. The are written in the smallest font you could possibly use and still be legible to the human eye, and they are brimming with tiny rules that apply to very specific scenarios which may or may not occur during your game. There are two of them because you need an entire starting set of rules to learn how to play your first game, and then once you finish your first game and you are dizzy from absorbing all those rules, you can move on to the full game which incorporates as many rules as you just got through reading, and which left you near-sighted, dizzy, and feeling a little like you just perused the Necronomicon and now you might be insane.

Just to make this point clear, my first game only took three hours. As I mentioned earlier, I have spent five hours in total getting ready for this review. About half an hour was spent setting up our first game, which means it took me more than 90 minutes to get through enough rules that I could play the learning version of this incredibly complicated game. I can usually finish a 16-page rulebook in 20 minutes - less if there are lots of examples and illustrations - so when it takes me an hour and a half to plow through the instruction manual, I feel like I could have spent my time better had I decided to learn Esperanto instead.

My second complaint is closely linked to the first one, and has to do with the fact that the Mage Knight board game has far too many different pieces, and they don't tend to work with each other. And when I say 'too many pieces', I mean both literally and figuratively. There are nine or ten different decks of cards. There are four different monster stacks. There are chits and tokens and markers in a huge variety of shapes and sizes, and it can be dizzying attempting to remember what each of them is supposed to do.

And beyond the fact that the game has so many actual pieces, it also has too many elements at play. Defeating a monster, for example, requires you to place a specific amount of attack points - but there are five different kinds of attacks, each generating attack points at a different time and for a different effect. And the monster might do damage to you, requiring you to block, but it might also make a flame attack, which you defend differently, or it might be harder to block, or it might do more damage before it hits. It rivals D&D for sheer complexity, but without all those cleavage shots and half-naked succubi.

Those are just two examples of the copious numbers of things at work in Mage Knight. There are many more examples of exceptions and varying mechanics and random complexity. It feels like the designer had a great idea for a game, and then wanted to add a couple things, and then another thing, and so on and so forth, until the the rules are busier than the graffiti-strewn wall in a public bathroom stall.

Final complaint before I get to the parts I liked (and yes, I did have fun) - the whole thing was just too mechanical. Assuming you can master all the various things you have to remember to play even the basic game, the game is still missing that sense of wonder and adventure that I want to see when I send a wandering knight into the world to explore and conquer. Combat is painfully mathematical, and you will almost always know if you can win before you decide to fight. Even when you dive into battle against a minotaur in a monster spawning pit, Mage Knight makes you feel like you have to analyze an expense report instead of screaming a war cry and charging into the fray.

Other elements were also rather dry. From movement to turn order, recruitment and magical attacks, everything comes down to numbers on cards. The most exciting things, like conquering a city or evading monsters, are so mathematical as to be preordained. There's virtually no mystery or tension or excitement, and that drains all the awesome right out of it.

But it's not fair to simply dismiss the Mage Knight board game, because I have to admit that I did have a good time playing the game. It wasn't as thrilling as I wanted it to be, but if you can master the analysis you need to excel, the game has some very interesting decisions to make. In fact, the elements of a good game are in there - strategy, tactics, timing and decision-making are all huge factors. You have to decide when to grab the first turn and when to hold off for a better payoff. You'll need to evaluate whether you can grab that ally before your opponent, and if it's worth the sacrifice it will cost you to do it. There's a lot to consider in Mage Knight, and even if it's an adventure game without much in the way of adventure, it's engrossing.

And if you want value out of your games, this is one where you're getting what you paid for. The box contains hundreds of cards and chits, eight painted miniatures, and enough tiles to build a world map larger than your kitchen table (assuming you have a very small kitchen table). The box is heavy as hell, which means that if you decide you don't like the game, you can keep it by the front door and use it to whack burglars.

If you do like the game, you can play it over and over before you start seeing the same thing. You can try it solo, you can try it as a race, you can even build up and fight the other guys at the table. You can mix up the land tiles to get to the cool spots faster, or you might just spend the whole game wandering around and killing orcs like fish in a barrel of monkeys. If you do enjoy it, you've got dozens of hours of play time in the box without ever having to wonder if there's an expansion in the works.

So there are upsides to Mage Knight, and I admit that I kind of want to try it again. But I also know I'm not going to try it again, for a variety of reasons. I would have to teach the game to my family, because my regular group didn't really love it enough to try it twice. I could play it solo, but I don't really like solo board games. If you ask me, that's what video games are for. And frankly, I just don't want to read the second rule book. I already had to upgrade the prescription on my glasses, and if I read that second book, I'm going to need bifocals.

If you've got the time and patience to work through Mage Knight, and you're OK with an adventure game that plays like a Euro, you might actually enjoy it. I won't be playing it again, because I just don't have the mental stamina, and when I play an adventure game, I want it to be exciting. And no matter what everyone loves about the Mage Knight board game, it sure is not exciting.

Pros:
Deeply strategic, extensively tactical, and full of tough decisions
Looks great, and there's a ton of stuff in the box
Countless hours of replay

If you want to play the Mage Knight board game, good luck. It's sold out all over the place. Noble Knight has one, but it's a little pricey:
WOAH, THAT'S STEEP
Posted by Matt Drake at 6:03 PM

I love this game, but I can't dispute your criticisms. I love solitaire/solo games. This is really a puzzle game instead of a standard adventure, and the way the challenges emerge organically from this game makes each game different to me.

I do have to take breaks between plays, because it really taxes the old brain cells. In fact, it's been over a month since I played my last game. I'll need to get this back on the table, assuming I haven't forgotten how to play.

The game certainly isn't for everyone, and one can never overstate the steep learning curve of the game. I am delighted that you were able to give it a shot so I can be entertained by your review.

Yes!
I'm so glad there's another person on this plane that isn't completely overwhelmed by the alleged awesomeness of Mage Knight.
Don't you just hate it when, after a round of higher mathematics, you realise that you actually CAN defeat that mage tower... only to discover that you still need 2 movement points to get there: it happens all the time and the only thing you do afterwards is moving away from the battle, looking for an easy orc.
MK feels like hard work and the problem is: i already do that for a living.

I haven't showed this to anyone who likes it, either. But thankfully, a genius of our time has gone and enunciated with UNCANNY accuracy all of its problems.

In the interest of not spamming your comments, and b/c the point of your review was to not read the other reviews, I'll just say it's the 2nd most popular review on BGG.

"but if you can master the analysis you need to excel"