Internet TV Review - The Booth at the End 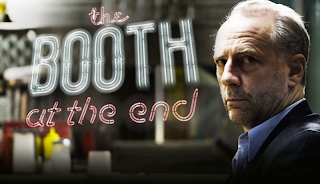 There are not very many good things about having your house catch fire. Really, I cannot recommend it to anyone at all. However, through a convoluted series of coincidental annoyances, I discovered something that is absolutely awesome - Hulu.

Of course, saying that I discovered Hulu is a little like saying that Christopher Columbus discovered America (how do you discover a place that other people have already visited, and that is already occupied when you get there?) I knew about it, and just hadn't ever bothered with it. It was too much trouble to watch TV on my laptop. But when our rat-trap rent house wasn't cable-ready, we bought a Roku and decided to just watch what we could stream.

And I'm glad I did, because otherwise I never would have seen The Booth at the End. Yes, I could have watched it on my computer, but I hate watching TV on my computer. I can barely stand to watch a YouTube video on my computer. But give me Internet shows on my television and let me sit on my sofa, and I'm in.

The Booth at the End is an artsy morality play about a guy who sits in a diner all day and gives people what they want, as long as they pay his price. His price is always a task, and it's almost always morally repugnant. The guy who wants to save his son from cancer has to kill a little girl. The girl who wants to be prettier has to rob banks. The old lady who wants her husband to get over his brain pain has to blow up a cafe. (Don't worry, I didn't spoil anything - you'll get all that before you're halfway through the first episode.)

The whole show takes place in the diner. There are shootouts and murders, romance and drama - but you never see any of it, you just hear about it when the perpetrators come back to report their misdeeds to the man in the booth. And yet you can't wait to find out what happens, even though you're only going to get the action second-hand. Will the old lady detonate her bomb? Will the fat guy nail the stripper? Will the man in the booth ever use the bathroom?

So many elements intertwine to make The Booth at the End a riveting piece of television. The show asks you what you would do to get what you want, but it does it without judging you for answering incorrectly. You'll sit there, watching the father struggle with having to take a life to save his son, and wonder what you would do in his shoes. You don't hate anyone for their decisions. The show doesn't have any villains.

In fact, while you might think that the dude in the booth is a bad guy, he really isn't. People keep asking him, 'Why are you making me do this?' and he always responds, 'the choice is always yours. I'm not making you do anything.' And in the end, he's not a bad guy. He's not a good guy. He's more like an instrument of fate, a guide on the path of free will. More than one of the people who come to see him will thank him for what he's done, and some of the grateful customers will surprise you.

Many Internet-only shows rely on what are quickly becoming irritating tropes, like dumb comedy, over-the-top CGI, or stupid stunts. For The Booth at the End to do so much with so very little is a fantastic indicator of the strength of the writing. You'll be glued to your seat through more than 90 minutes of a guy having conversations in a diner, and when you're done, you'll be disappointed that it's over.

The story isn't the only things riveting, either. The characters in this show are dynamic, three-dimensional and interesting. Even the shallow losers are capable of surprising you, and they'll change as the show progresses. The man in the booth seems to be little more than a plot device at first, but with the help of an inquisitive waitress, he, too, shows that he is human (even though he may not actually be human).

I could talk for a lot longer about all the reasons you should watch The Booth at the End, but I really don't want to spoil it for you. Plus if I go on too long, I'll build up all these expectations and then you'll be desperately disappointed. So here's a link. Check it out:

Thank You! My wife and I are loving this. Though not at all the same, I think you might like Sherlock. It's a modern retelling of you know what. The best part of the show is how technology is used, i.e. realistically.

Oh, yes! I love Sherlock! Also a great show. I was out on it at first - I've seen about all the Victorian Holmes retellings I can stomach - but the modern reboot is so much fun. Really good stuff.

You Dangerous and corrupting pernicious entity, last time you recommanded a show (We're alive) I've been totally crazy about it. Guess I'll carefully give it a try this time too :P

I've seen Hulu try to get people to watch this show. I was skeptical for the whole first season. Then, saw season 2 has started and decided to try it. I watched all available episodes. I'm hooked. I'm not sure why more people aren't talking about it.

This is a fabulous gem of a series offering real drama longed for by those of us who reject the "reality genre" made so popular today.This series demonstrates imagination is alive and well,and fine acting does absorb and entertain. Hooked