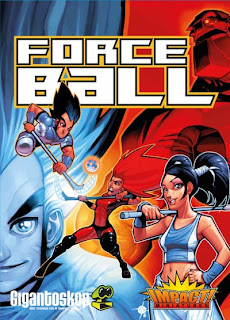 I have to admit that, by and large, I hate games about sports. I guess the way I see it, if you want to play a game that simulates baseball, go outside and play baseball. The only exception is when the sport I'm playing is A) exciting and potentially dangerous, and B) not real. Then I don't mind them in a game so much.

In the case of Forceball, in fact, I like the game a whole hell of a lot. It's a card game consisting of exactly 55 cards and some rules. That's it, unless you count the box. That's even smaller than Fluxx! And yet there's a ton of game to play in this little box. You could set up whole tournaments, only you would have to get actual prizes, because this game is done. Don't go looking for promos and limited-edition miniatures. It's all in this box.

Now, nobody expects a game about a sporting event to be completely realistic, and in this case, that's good, because Forceball really is just a card game. You'll build a pile of cards to say how fast you're moving, and discard from your hand to power up your shot. While it is fun to picture a fast-moving, cutthroat game of zero-gravity, full-contact field hockey, you're more concerned with managing your hand of cards than you are with moving the ball up the field.

In fact, that's kind of why this is such a brilliant game. You don't have to keep track of individual players or field position. All the stuff you would track if you were really a coach is abstracted through card play. What you have to consider is keeping up your momentum by pressing your opponent, reserving your strength for the big plays, and running down the clock when you're ahead.

So many decisions have to be made as you play, starting before you even drop the first card. You'll have to decide if you want possession at the whistle, and choose the card that has the best chance of giving you what you want. You'll decide which plays to execute based on your speed and force, as well as paying attention to whether you're pushing for better field position (by having more cards) or driving hard to score before the buzzer. Is it worth throwing a high-stick to make your pass into a dribble, or should you try to bluff past the defense with a weak play and a lucky shot?

Forceball is not just about the cards, though. Parts of it are all about getting in your opponent's head and psyching him out (that's a phrase the kids used to say when I was a kid. I don't know if they still use it. And I don't care). When you ask to raise the stakes, are you bluffing to get a cheap score, or are you really that confident? Do you have the card power to back up that desperate mid-field pass, or are you just trying to sucker your opponent into dumping all his cards before you let him have the ball? Are you really dumping off the play with an unimpressive tackle, or are you just setting up the other guy for a sneaky shot?

This sounds like it could be a tricky game, and honestly, it kind of is. When you're playing with the full rule set, there's quite a bit happening, and if you just dove into the deep end of the pool, you could get overwhelmed pretty fast. But the rules do a great job of stepping you through five different leagues, with each one building on the one before. You can sit down with a friend and go through the rules together, and after an hour, you will have not only had a very good time, but you'll understand all the nuances of Forceball.

Forceball is, quite simply, a great game. For a deck of 55 cards to offer such a brilliant experience shows an incredible dedication to fine-tuning and testing. The deck is exactly as big as it needs to be - more cards, and the clock would be too long. Fewer cards and you would hamstring your options. You'll be able to plan and strategize, bluff and maneuver, and engage in a great battle of wits. And with the gorgeous art on the cards, you'll be able to envision every painful tackle, every last-minute block, and every desperate shot. If you're looking for a bad-ass two-player game, you owe it to yourself to pick up Forceball.

Cons:
Nothing I can think of

Seriously, Forceball retails for ten bucks. TEN. That's less than I paid for lunch. And if you get it from Noble Knight Games, you can get it even cheaper!
FORCE THE PLAY
Posted by Matt Drake at 2:54 PM

Drake you apparently made Noble Knight sell out of this game. I went to check the link and they are out of stock/on order.

The game is back in stock @ Noble Knight. I bought a copy and threw some referral love your way :)

Hi.
I was part of the team that made this game. We spent a lot of hours on it and by the end we were a bit tired of our own game (as per usual).
Your review and knowing that people out there really enjoy it makes it totally worht all the time we spent.

Finally got to play a game. You were dead-on for how quickly players can ramp up using the stepped rules. We began at the lowest league and, within an hour, had worked up the next two ranks. A lot of laughing and cursing. There's quite a bit of strategy in this one!

Congrats to Christoffer and crew for the fun game. This copy of the game will stay here at work, and I'll probably buy an extra one for my bookbag.