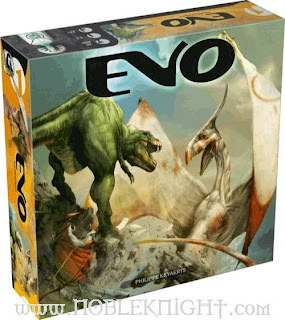 History can show us countless examples of games used as propaganda, like when Careers taught me that if I wanted to get ahead, I needed to let my boss win at golf. Usually these are amusing or at least innocuous, but sometimes they are downright perfidious. Take, for example, EVO.

This reprint appears to be a fun, confrontational game about saving dinosaurs during an era of rapid climate change. But it is actually a horrible attempt to brainwash our children to become Nazi perverts. I don't care how beautiful it is, I simply cannot condone such a twisted set of ideals.

You can first begin to see the darkness of EVO from the object of the game. Everyone has a herd of dinosaurs, and the end of the world is quickly approaching. Only one herd can survive the meteoric apocalypse, so every player is fighting to make his own group the master race. This master race will be pure, and probably blond, and all others will die out. They are clearly dino Nazis.

Now, if EVO were a boring, unimpressive game, this message of hatred and fear would probably go largely unnoticed. But the publishers of EVO have made their manifesto so much more insidious by nesting it inside a game that is very interesting and very fun. Your kids will want to play. Your friends will want to play. And when they do, they will be exposed to the subtle indoctrination of Aryan superiority, as represented by extinct giant lizards.

The game itself is a balancing act of a few different cool ideas. There's a neat bidding segment where the players try to procure the best genetic upgrades for their race of superior beings, followed by a cool maneuvering phase in which you'll all try to get your dinosaurs to safe land before they either cook up or freeze to death. This is accompanied with some brutal dino-on-dino violence, in which the Nazisaurs will attempt to prove how much better they are by stomping opposing dinosaurs to death.

Unfortunately, the next phase of the game introduces a new perversion. Once your herd has moved around, you have to lay some dinosaurs. This is clearly sexually deviant. There is just no excuse for laying a dinosaur. I could see it if the dinosaurs were replaced with sexy Amazon women, and I could even let it go if they were circus freaks or something kinky. But bestiality? That's just not right.

To make matters worse, my daughter actually said she was going to birth some dinosaurs! She was obviously falling under the spell of this exceptionally entertaining game and its twisted message of Aryanism and sexual deviants, when she was prepared to actually give birth to more dinosaurs! It's downright criminal!

So after you have performed illegal acts on your elitist dinosaurs and added new dinosaurs to the herd (probably half-human, half-lizard mutant hybrids, after all that inter-species perversion), you will have to check and see which ones die. Because of the rapidly shifting climate, dinos in a previously healthy jungle may suddenly find that it's far too hot there, and just keel over and die. If you have equipped your dinosaurs with some heat-regulating mutations, you might save a couple, and if you have the right genetic upgrades, you can also pop out a few baby lizards to replace the ones who melt. Of course, this just furthers the subtle undercurrent of perversion, but it does give you a good reason to make more little lizard people.

The very last part of every turn gives every player mutation points. These points are used for two things. First, they let you buy more mutations, which will hopefully keep your sex toy fascists around another turn. Second, the player with the most points when the meteor crashes down is the master race, and wins the game. So you have to spend them to make your dinosaurs more hardy, but you have to be careful, because they're both currency and victory points. Cool, huh?

So the creators of EVO had wrapped their little subversive propaganda inside a delightfully entertaining and exceptionally fun game, but to make it look even more like a candy bar offered to a child from a white panel van, the game is nothing short of visually stunning. Every single piece of art in the game is magnificent, from the box cover to the event cards. You'll want to play this game just because it's so darned pretty, and then they will have you right where they want you - enjoying the hell out of a game about Nazi degenerates.

Cons:
May convince you to become an Aryan pervert

Finally, I'm reviewing a game where you can save a few bucks! Just head over to Noble Knight Games and pick up this sexy new reprint of the classic game, and don't pay retail if you can help it:
NAZISAURUS PERV
Posted by Matt Drake at 1:33 PM

So, was Land of the Lost basically about a family who stumbled into a half completed game of EVO?

Awesome review!
And I really love the game.