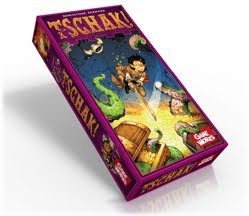 This is not a review of a Russian game. I just thought I would get that out of the way right now, because it very well could be, if you just look at the name. But in this case, 'Tschak' is not a translated word from a foreign language. In this case, 'Tschak' means roughly the same thing as 'Shnick' or 'Fkow' or maybe even 'Kpam'. From Webster's Totally Not Real Dictionary:

In theory, the goal of Tschak is to enter a dungeon with a team of adventurers and kill monsters and steal treasures. In practice, the goal of Tschak is to build three solid plays from a hand of ten cards in order to maximize point gains and minimize penalties. Obviously, the title of the game is slightly removed from the actual game play. So there is some abstraction.

In fact, there is very little need for the dungeon theme at all, aside from providing a springboard for some very entertaining art. You're going to get ten cards, and then you're going to see what rewards and penalties you'll compete for this round, and then you'll figure out how to play three hands before you bundle up your cards and pass them to the next guy. Basically, it's a trick-taking game. It's got virtually nothing to do with dragons, skeletons or angry dwarves, unless you play with Vern Troyer and Nicole Richie (in which case you still won't have a dragon).

But it is fairly challenging. The thing is, the playing field is pretty much level, with most of the luck of the draw inherent in a card game being mitigated by the fact that everyone is going to play with the same hand eventually. There are four rounds, and forty cards, and ten cards played in each round. When you finish a round, you pass the cards and play a round with the cards someone else was holding last turn, and see if you can do any better than they did. You don't rely on getting a lucky hand. The winner is the one who plays his cards better than everyone else.

Honestly, Tschak is not generally my kind of game. I like maneuvering tiny robots around a map to battle other tiny robots and then rolling dice, or moving miniature barbarians around miniature dungeons and fighting miniature goblins and then rolling dice. But my wife prefers traditional card games to hobby board games. She whips my ass at Spades every single time. And she very much enjoyed Tschak, which means it's a game that is going to see some serious play time in my house.

Tschak does have many of the elements I like to see in a game, whether it's a card game or not. It provides for strategy from the beginning of the game, and rewards the player who sticks with one consistent plan. It also requires flexibility and quick decision-making, because you're going to have to determine your plays at the top of every round (or one card at a time, depending on how good you are at playing card games, which means that my wife does it once at the beginning of a round, and I end up doing it every time I have to play a card). There are several different strategies you could employ to win, and part of winning the game is playing to your own strategy while countering your opponent's plans.

Tschak is not a game that I would replace if I lost it in a fire, except that my wife likes it. I'm kind of lukewarm on it, because I like games where people die. But I do enjoy playing it, and I really love that my wife likes it, because that means I'll get to play it with her. It doesn't really live up to the name, and I certainly don't get the impression that I'm dealing out bloody tschaks (or even minor fwiks, fleshy ktumps, or devastating prakaows). It's just a fun trick-taking game that the whole family can enjoy for thirty minutes, and then we can put it away so my teenagers can go back to texting their friends and I can go back to worrying about the bills.

Pros:
Cool card game that rewards strategy and good card play
Fun for the whole family, as long as the kids are out of grade school
The art really is great

Cons:
Theme could be replaced by a story about drunken field mice in a steel mill (though you would need new sounds)

I really hate that I keep reviewing games that aren't out yet, but unfortunately, all the games I was going to review kind of got torched when my house caught fire. I can't tell you where to get Tschak, because it won't be out for a month or two.
Posted by Matt Drake at 2:14 PM