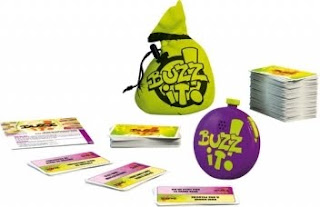 One day I'm going to figure out why people think party games are fun. For the most part, they're stupid. They're essentially a tiny handful of largely nonsensical rules meant to force social interaction for people without enough creativity to simply talk to each other. Half of them are centered around knowing something about the other people in the room, and most of the rest are irritating wordplay.

But I must confess that every now and then, I find one I can more-or-less tolerate. It doesn't mean the game is any good, mind you. It merely means that I can play it without wanting to do violence or take a nap (or violence followed by a nap). Buzz It! isn't a great game. In fact, I used to play a similar game when I was in college, only when we did it, there was a lot of alcohol involved.

The rules for Buzz It! are about as complicated as plugging in a hair dryer. One person reads a theme from a card, then everyone names something that fits. The guy with the buzzer decides whether the answer is worth a damn, and either hits the button on top (making a beep that tells the next player to say something) or lets the clock run out so the buzzer can make a sound vaguely similar to a mountain goat running head-first into a dishwasher full of plates stored inside a gigantic tin can. I can only assume that's supposed to be a buzz.

If the buzzer makes its broken glass sound before you can answer, you take the card and the buzzer passes to the next person. After a handful of cards have been played and passed around, the game is over. The winner is the one with the fewest cards, but really, you're not going to bother to keep score. It's a party game. Nobody cares who wins.

The entertaining factor in Buzz It! is the silly things people will say to answer the theme. For instance, when asked to come up with uncool ways to break up, my wife said, 'e-mail,' my daughter said, 'write a mean song,' and my son said, 'murder.' I laughed uncontrollably, and made a mental note to check the locks on my bedroom door.

In fact, the real reason Buzz It! is even playable is because the creators of the game spent a long time coming up with some rather amusing things. You might be asked to name things you should not buy at a garage sale (my daughter recommends you not purchase small children), cartoon heroes (again my daughter amuses with 'Green Ivy', by which she means Poison Ivy, who is, for the record, not a hero at all), or things said by moody teenagers (in this case, my children could not lose, because every single word either of them said was, by definition, a correct answer). This is better than the way we did it when I was in college, because our rules went as follows.

1. Buy a case of Keystone Light. Consume all of it between three guys and two girls.
2. Return to the 7-11 across the street and purchase another case of Keystone Light. Consume that, too.
3. Now that you're out of money, but still half-sober because you've only been drinking Keystone Light, rummage around the kitchen for a nearly-empty bottle of tequila left behind after last week's party, and only still around because it was shoved behind the milk, which had gone visibly sour, and everyone in the house was avoiding having to move it.
4. Pour a shot of tequila. The loudest person in the room (who, by sheer coincidence, is probably also the one who has consumed the greatest number of beers) announces loudly, 'I've got one!' He then declares a theme that probably has something to do with sex, unless there are no girls present, in which case it probably has something to do with stupid things girls say.
5. Everyone takes turns naming something that fits. 'Rubber fist' is perfectly acceptable. 'Live animal' is not.
6. When someone cannot come up with an answer in a timely fashion, he must drink the shot of tequila. Preferably, this person is a girl, but in nearly every game we ever played, the girls were smart enough not to play this game until we were all too drunk to win.
7. The person who lost (probably a guy) comes up with another theme, unless he is throwing up into the kitchen sink.
8. After ten minutes, get bored and go back to watching television.

As you can see, this game is not acceptable for families. It's only barely acceptable for college students. And Buzz It! is not only more fun, it also involves far fewer cases of alcohol poisoning. Also, nobody has to move the spoiled milk.

So the rules are practically nonexistent, and really just there to take my favorite college drinking game and make it socially appropriate. But the cards really do make the game more fun, and if I were still in college, we would own a copy merely so we could shout down the loud drunk when he says, for the third time that night, 'things you can put in your butt!'

Pros:
A fair amount of thought went into the cards, so that it's actually somewhat entertaining

Cons:
Still a lame party game
Does not include tequila or college girls

There are probably cheaper places to find this blast from my past, but here's a link in case you want to buy it right from the publisher:
http://us.asmodee.com/ressources/jeux_versions/buzz-it_5.php
Posted by Matt Drake at 5:37 PM

Briliant review! Especially the drinking game description. Had I been drinking coffee, it would have gone out through the proverbial nose in an instant.