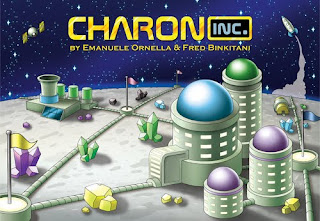 If publishers were athletes, Fantasy Flight would be some NFL star who occasionally gets caught in motel rooms doing cocaine off a hooker's ass. Rio Grande would be a Major League Baseball superstar who rarely does interviews, but always manages to hit the homer when the team needs it to finish off the series. And Gryphon Games would be a minor-league batter with a respectable hitting average, for the minors.

Gryphon Games doesn't make those games that get everyone all riled up. They have a lot of Reiner Knizia reprints, and a handful of light, interesting games that appeal to about one in four gamers. So when they have a game as good as Charon Inc., it's worth taking a look. The game might not be a grand slam, but it's a solid double, possibly a triple, if it can find its legs and really hustle.

Charon Inc. has a handful of players competing as rival corporations for control of Pluto's largest moon. Only instead of simply battling for space, players will find themselves working to grab up the resources they need to build the best buildings on the planet. Actually controlling an insanium mine is worthless, unless you really need some insanium to build a space dock.

The planet is broken into a whole bunch of sectors, and each sector is going to produce some quality resources every turn. They might be purple resources, or blue or yellow or black or green, but either way, you'll probably need some. So you'll take turns placing control flags, though it will never seem like you have enough to grab all the stuff you want, and you'll have to be particularly clever if you want to have enough mineral resources to build your interplanetary gentleman's club, complete with three-breasted prostitutes (those may just be on Mars, though).

The flag placement is the main part of the game, and you have to be really careful here. Place a flag at a crossroads, and you'll exert influence on four different sectors, but you'll lose ties to the player who builds between sectors and only influences two. More than half of the control contests will be decided by tie-breakers, so there's a tricky balance between grabbing for too much and attempting too little.

Once the flags are placed and everyone snatches up their rocks, you can try to build stuff. The really good buildings require lots of rocks, so you have to hope you nabbed the right resources. This part of the game isn't all that tricky, except that you had to prepare for it or you're going to wind up without enough magic Pluto rocks to build so much as an all-night gas station.

There's a lot more to the game, too. You don't place your last flag, you just leave it on a special ability space that might let you store some resources for next turn, or trade stuff at a favorable rate, or maybe move a flag after everyone else is done. You can also trade your unwanted minerals for stuff you can use, which means that if you can't get those two purplonium crystals, you may be able to mine enough yellonium to swap out for it.

Once you get the hang of it, Charon Inc. plays fast, though it will take you a few games to really understand the tricky parts. Planning your flag placement is critical to success, and you really need to choose a bonus action that dovetails with your strategy. Will you build a bunch of low-rent tattoo parlors, or go for the gusto and slap down an embassy? Save your resources for one turn and really come on strong the next round, or burn everything to make the best stuff you can get right now?

Charon Inc. is a very fun game, even though there's no body count anywhere. These are very polite corporate executives, and shooting at each other is out of the question (though it would have made the game a bunch more entertaining). The art won't blow your mind, but it gets the job done, and the quality of the rest of the components is very nice. Like I said earlier, this is a really good hit - not a home run, exactly, but enough to drive in an RBI if the last batter got on base. I definitely recommend it, especially if you're able to enjoy a game where nobody gets stabbed.

Cons:
Possibly a little bland if you're a theme-whore

Unsurprisingly, Dogstar Games does not carry Charon Inc. They tend to have more of your major league games. But you can probably find it at the Eagle Games website.
Posted by Matt Drake at 2:24 PM

Just wondering if you can put in your summary section the min/max of players for each game?

I've noted previously that my usual gaming group tends to be large. While I often buy games merely on your recommondation (don't let it go to your head), it sucks when a good number of them can't get played unless half the group comes down with plague.

I think that is a very good idea. I'll implement it immediately, and maybe go back and add it to some older reviews (at least, the ones where I can remember).