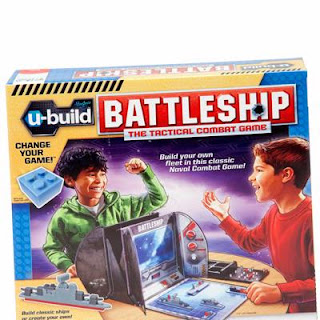 I have got to revisit my policy regarding review copies. I've always said that if you send me a game, I'll review it, period. This has resulted in an awful lot of very bad games arriving at my house, to the point that sometimes, I think someone is pranking me. It's like that gag where you sign up your boss at a bunch of gay porn websites. But without that policy, I may never have received review copies of some of my favorite games, like Caladea or Alien Frontiers (review coming this week). So it's hard to think of changing it. Or it was, up until a couple weeks ago, when I received...

Battleship is one of those games that I was all excited to try when I was about eleven. Back then, it was Electronic Battleship, and the theory was that the board would tell you when you hit the enemy ships. Only my copy was second-hand, and instead of alerting me to hits and misses with exciting explosions and dramatic splashes, it would burp out warbling tweets at random moments that sounded like a dying giraffe, until we finally took out the batteries. Having played the game as well, I decided the entire affair was best donated to some other poor bastard - in this case, my little brother.

In case you entirely missed grade school, or maybe you were born deep in the jungles of Borneo and just recently got Internet access, Battleship is quite possibly one of the lamest games of all time. You set up your ships at random on this little hidden grid, and then your opponent does the same on his grid, and then you call out grid numbers to see if you hit anything. If you did, your opponent lies about it and moves his ship. At least, those were the rules in sixth grade.

U-Build Battleship is Hasbro's latest attempt to make Battleship even remotely marketable as an enjoyable way to kill time. They decided to do this by adding the one thing all children find irresistible - Legos. Only they're not called Legos, because Legos are German or Swiss or something. These are just U-Build blocks. And to be fair, not all children are obsessed with them, even when they are the European variety. I was, but neither of my kids ever had any interest in them, much to my personal dismay.

Now you can customize your aircraft carrier and submarine with more guns than normal, so that instead of firing one shot at a time, you fire as many as your best-equipped boat, and as your ships get blown up, you have fewer shots. This little twist is honestly as good as it gets. Customized Battleship is still, unfortunately, Battleship, and has all the intellectual appeal of pre-chewed gum that you found stuck under the table at the pizza place.

I'll say this for Hasbro, though - the stuff in this box is really nice. The blocks fit together great, and if you've ever played with old-school Megablox, you know that's not a given. The board is swanky, with cool art and neat little standups, and there are little storage trays and a recorder board. All things considered, this is way better than Electronic Battleship, because for one thing, it won't electrocute your fifth-grader. It's still Battleship, which is one of the worst things anyone can say about a game, but it sure is pretty.

In fact, in my history of playing games, only two games have stood out to me as being worse games than Battleship. One was Candyland, and the other is Snakes and Ladders. Neither has anything resembling a strategic component, which is a feature they both share with Battleship. But at least in Battleship, there's violence. And in U-Build Battleship, there are fake Legos and customizable violence.

But it's still Battleship.

If you somehow manage to wind up owning U-Build Battleship and needing an opponent, consider calling this guy:
http://morethananelectrician.files.wordpress.com/2010/07/corky.jpg
Posted by Matt Drake at 7:38 PM

Even though the game is a 'uge pile of steaming fecal meterial produced from the butts of nazis (time to invoke godwin?), it still seems that its a game that everyone has to experience early on in their development to hone their cheating abilities. Call it a right of larcenous passage.

Matt my friend, you are really starting to scrap the bottom of the barrel with a few of these games. But you are already aware of the dismal state of the review games sent to you lately so I wont harp about it as if it was your fault.

Tell Hasbro that unless they meet your demands regarding Heroscape that you will no longer subject your faithful readership to the dreck they typically like to force feed to the mewling sheep which is their regular customers at wally world.

Thanks for the review, I had seen ads for these new "U-Build" games on TV. They are as shitty as they seemed.

Wow. I just bought this wednesday at Walmart. I LOVE the build able ships. I can play with the Le... Ugh.. U builds and make cool ships. And with the Battleship cardboard pieces, I can make background scenes for my action figures. Only 6.00 for some Legos and Diorama cardboard. Pretty sweet! A nice closeout item.